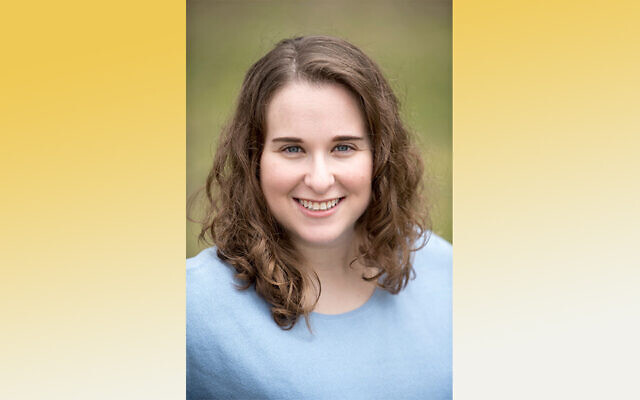 Andrea Guthrey wants people to sing with her.

In fact, the cantorial soloist enjoys leading congregations in song so much that she currently divides her time between two local synagogues — Temple B’nai Israel in White Oak and Temple David in Monroeville. In fact, she is so committed to singing at the two Reform synagogues that she drives more than 40 minutes to the Eastern suburbs from her home in the North Hills, where she lives with her husband, Justin, and their puppy, Daisy.

Guthrey is moved by “everybody joining together with their voices in prayer,” she said. “I love hearing people sing with me.”

Guthrey, who grew up in Cleveland, Ohio, has loved singing since she was a child. She recalls performing along with her father for the residents of Menorah Park Nursing Home where he worked as an administrator, Guthrey singing while her father played guitar.

“I think that was my first time performing for people,” she said. “I have this memory of my dad, who never really did anything with music, but had a lovely tenor voice. I think hearing him just put something in my head.”

Then, as a camper at the Union of Reform Judaism’s Goldman Union Camp Institute, she “just fell in love with Jewish music,” she said.

The future soloist performed in choirs during high school, and also credits her hometown cantor, Kathryn Wolfe Sebo from The Temple Tifereth Israel, with motivating her to pursue music as a career.

“I grew up admiring her voice so much,” Guthrey said. “She was a wonderful person with a gorgeous voice.”

Guthrey came to Pittsburgh to pursue a master’s in music performance at Duquesne University after earning an undergraduate degree from Ohio University in music education and vocal performance. She was singing in a church choir when she decided to contact Rodef Shalom’s Rabbi Sharyn Henry to see if there were opportunities to sing at the synagogue. To her surprise, Henry hired her. She sang a few times a month as one of several soloists employed by the congregation.

After leaving Rodef Shalom, Guthrey began working closer to home at Temple Ohav Shalom in Allison Park, where she served as the congregation’s youth director, music director and cantorial soloist. Eventually, she added the title of assistant director of education, and worked there for four years.

In 2018, Guthrey began serving as Temple B’nai Israel’s cantorial soloist for the High Holidays. The 32-year-old now helps lead the congregation in song during Shabbat services, a role she assumed when the congregation began streaming on Zoom due to the COVID-19 pandemic. Since the congregation’s return to in-person services, Guthrey has continued to sing at the synagogue one Saturday a month.

She sings at Temple David the fourth Shabbat each month (and the fifth week, if there is one), leading the young family service earlier in the evening and the regular Shabbat service at 7:30 p.m. She also assists with “special” services, such as “Shabbat in the Park” and Simchat Torah, said Rabbi Barbara Symons, the congregation’s spiritual leader.

Equally at home with both the drama of High Holiday services and the everyday spirituality of a Friday night Shabbat service, Guthrey said some of her favorite pieces are Avinu Malkeinu and Kol Nidre.

“They’re just so beautiful,” she said. “I love whenever I get to have a cellist with me for Kol Nidre.”

Temple B’nai Israel’s Rabbi Howie Stein said Guthrey is easy to work with and fits in well with his congregation — which likes to sing.

“She’s able to combine the abilities of a strong leader with melodies the congregation knows,” he said. “I generally give her complete discretion over what melodies she chooses. It’s a good relationship.”

“She brings a joyful attitude, both in the planning and in the leading,” Symons said. “She has an obvious gift for music which I very much enjoy. And she is able to lead when it’s a service of our youngest folks to ones that might need more traditional music. She has the flexibility and versatility to do both of those.”

Whether it’s Zoom or in person, the High Holidays or “Shabbat in the Park,” Guthrey finds joy hearing others sing with her.
“There’s a beauty in that,” she said. PJC