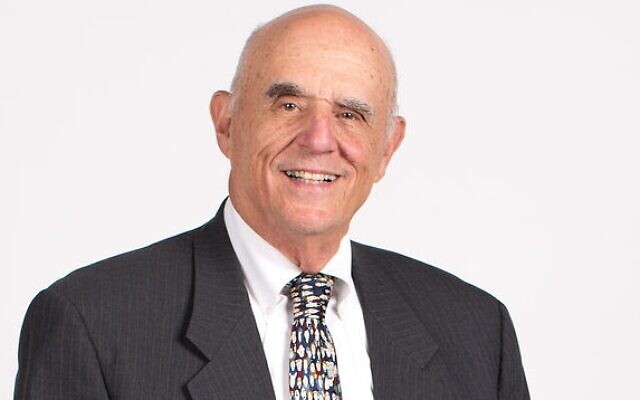 You can find out what you need to know about Dan Askin’s work in the Jewish community by joking with him about group thinking.

“I don’t go for boards,” laughed Askin, a quick-witted and self-deprecating Baltimore native who started giving back to Pittsburgh shortly after moving here 46 years ago. “If I want to do anything, I’ll go out and do it.”

The Squirrel Hill-based health and life insurance worker by day — “I do people, not things,” he says, proudly — has been conducting his “after work” activities this way for decades, with groups as varied as Congregation Beth Shalom, Israeli stamp hobbyists and Toastmasters International.

Askin joined the downtown Pittsburgh chapter of Toastmasters International, a nonprofit dedicated to promoting communication and public speaking, in 1986, back before some of the members there today were even born. In the era of COVID-19, the group continues to meet twice a month via ZOOM.

About 15 years ago, Toastmasters in Pittsburgh started inviting charity and nonprofit figures to give five- to seven-minute speeches during off-meeting weeks of its “Dawn Patrol,” named as such because it meets before the work day begins. Members would bring filled-out checks with the “To” space blank, and vote on the speeches that hit them hardest; the “winner” went home with most of the pot.

Pittsburgh members of the Dawn Patrol estimate they have made about $1,500 in charitable donations to date.

This year, the group didn’t want COVID-19 to alter its annual tradition, and with participants from a number of groups taking part in this year’s speech competition, Pittsburgh’s Jewish community was well-represented — in no small part thanks to Askin. Representatives touted the work of the Hebrew Free Loan Association and the Jewish Assistance Fund. (The Pittsburgh Jewish Chronicle also participated in the event.)

“It’s really interesting to see what people are up to and how people are committed to things and just do them,” Askin said.

When Askin is not being charitable through a public speaking organization, he extends his efforts elsewhere. About 30 years ago, he took to shaking up Conservative Judaism rites at Beth Shalom.

“Women didn’t get to do much then, and that became a cause célèbre,” he said.

He ushered in a new service in the building’s smaller sanctuary dubbed the “Library Minyan.” It ran for two decades.

“There, women were partaking in the service and doing things from the front of the synagogue,” Askin said. “It has made a world of difference.”

Even within the Library Minyan, Askin was not a traditional leader; instead of pontificating from the bima, he liked to stand in the back, handing out prayer books to everyone who entered the service.

Years ago, he joined the American Philatelic Society, a stamp-collecting hobbyist concern; shortly after serving as treasurer of the Pittsburgh chapter, he went out on his own and formed a local group around collecting Israeli stamps.

Askin served as the executor of a local stamp collector’s will and had to disperse $10,000 to Jewish groups. Soon after doing that, he visited Masada in Israel. After a brief rainfall, he saw a double rainbow at the site in the Negev Desert.

“That told me, ‘What we did with the money was the right thing,’” he said.

Even today, he is modest and self-effacing about his leadership roles. At Toastmasters, his fellow members jokingly call him “El Presidente” but Askin, when pressed about the nickname, redirects praise to members who are sharpening their skills in English as a second language.

Askin has at least one vocal promoter in his corner — his wife, Ronna.

Ronna Askin worked for 20 years for UPMC but is better known as a Jewish Federation of Greater Pittsburgh committee member dedicated to Israeli sister region Karmiel/Misgav, a board member of the Hebrew Free Loan Association, and a key cog in the establishment of Community Day School.
“I can’t even tell you how many things I’ve done in this community,” she laughed.

She sums up her husband nicely.

“I think he’s a generous, exceedingly generous human being — he’s always looking for ways to help people,” Ronna Askin said. “He’d rather not do things the committee way. He just wants to be the guy out there doing the stuff.” PJC