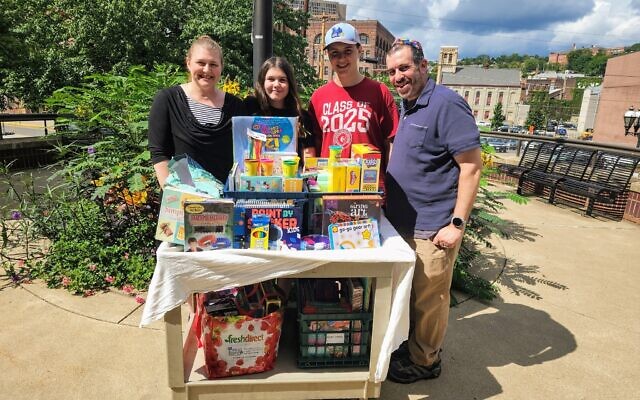 Six years after Meira Loring was treated at UPMC Mercy Burn Center for injuries on her legs and torso, the Squirrel Hill resident returned with a handful of presents in tow.

The gifts, which included Play-Doh, Spirographs, stickers and other art supplies that Meira collected as a bat mitzvah project, are intended to be used by children requiring extended treatment at the center.

“I just think kids will enjoy playing with them and have a really great time with other people while using them,” Meira, 12, said of the gifts.

Her father, Jonathan Loring, said he remembers how meaningful it was for Meira to have toys and art supplies to use during her hospitalization.

“It's such a big deal to leave your room in the burn unit, to go and be able to do art and play games,” he said, adding that when Meira was finally able to enjoy those activities it was “a big stepping stone for us.”

Returning to UPMC Mercy last week was another milestone.

Meira came to the burn center after she sustained injuries in an accident at her family’s home shortly before Shabbat on Friday, Jan. 1, 2016.

“There was a time where the doctors felt that Meira would not be able to walk,” her father said. “It's through a lot of perseverance, resilience, help and prayer that we are here.”

Meira’s mother, Leah Ackner, praised UPMC Mercy and Pittsburgh’s Jewish community for providing help and support both immediately following the injury and in the years that followed.

When it came time to think of Meira’s bat mitzvah project, it "made perfect sense" to unite the Jewish community’s generosity with the burn center’s work, Ackner said. The community knew how much “Mercy had helped us and we’ve been so blessed by the community to support us through this entire time.”

Bringing the items to UPMC, while acting on behalf of the Jewish community, was significant, Meira said: “It means a lot to me because I was once that kid who ended up in the burn unit playing with these things and doing art with my family. So I would love to see other kids do that art.”

Loring’s brother Zev, 15, said it was incredible watching Meira return to the hospital with so many gifts in hand.

“It's honestly really cool just seeing how Meira got through all of the things that she had to go through and to really see how this stuff helped her get to where she is today," he said.

Apart from becoming a bat mitzvah and a community-minded preteen, Meira is a junior black belt in karate.

She is "really active now," and a lot of that began with her use of the art supplies at the burn center years ago, Zev said. "It's pretty cool to see her give back." There’s an additional takeaway to Meira’s return to the hospital.

When patients sustain a burn, “it's not just a physical injury but it's a very emotional injury,” said Dr. Jenny Ziembicki, a surgeon and medical director of the burn center. Part of managing exterior scars is learning how to handle the pain and the perception — both how patients see themselves and “how other people see their scars.”

For patients, there’s a long process toward healing, but medical professionals also experience a journey.

“As providers, it's hard to push patients — particularly if you are taking care of injured children. You can feel that a little bit more intimately,” Ziembicki said. “You have to inflict pain when you're doing dressing changes. It's hard to push them to get up and do their therapy. So when you're able to see them recover and come back, it's really rewarding.”

Ackner said she was moved by standing alongside family and some of the people who helped Meira.

“One of the really unique things about Pittsburgh is that when it comes to things like this, people just jump in and support you — people you don't know, people you do know,” she said. PJC