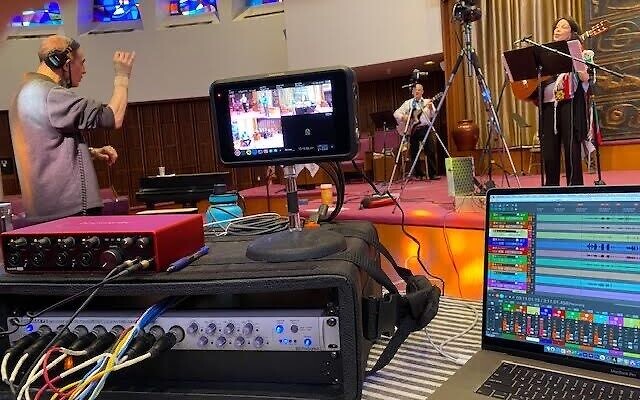 Sometimes it takes more than a good idea. Sometimes it takes passion and a fair amount of chutzpah to see a concept from creation to fulfillment. Temple Sinai member John Schiller knows just how important that combination can be.

While in Cape Cod in 2015, Schiller happened upon a local synagogue’s “Boomer Shabbat,” featuring music favored among those of a certain age. He thought the concept was perfect for Temple Sinai and began a multiyear process convincing then-Senior Rabbi Jamie Gibson to give it a try.

Three years later, Gibson agreed, and asked Cantor Laura Berman to “make it happen,” Schiller recalled. “She reached out to me and said, ‘You finally have your wish.’”

Berman felt it important that the service be more than just a greatest hit collection of 1960s socially conscious songs and that it keep the flavor of Shabbat.

“We sat together and studied the Friday night service and the different blessings and prayers and textual components that are part of that,” Berman said. “Those were our jumping off points.”

The Shabbat liturgy, she explained, offered themes for which songs could be substituted in place of traditional prayers and blessings. The Reform movement had already experimented with this idea, offering modern interpretations next to customary service sections in its “Mishkan T’Filah” prayer book.

Recognizing what not to change was just as important as understanding where there were opportunities for interpretation, Berman explained.

“I mean, we weren’t going to change the Shema,” she said. “There were things that were just too central to the service.”

For Wecht, creating the service allowed him to hear songs he had enjoyed for decades in new ways. In addition to traditional folk songs like “If I Had a Hammer” and “Turn! Turn! Turn!”, which have social justice components, the popular love songs from the era were transformed when sung as hymns to God.

Once the songs were selected, Schiller and Wecht found musicians who were interested in playing the pieces. Some of those members came from Temple Sinai’s previously established band, sometimes they were from outside the congregation, and sometimes they were not even Jewish, Schiller said.

“It’s been a rather ecumenical experience,” he added. 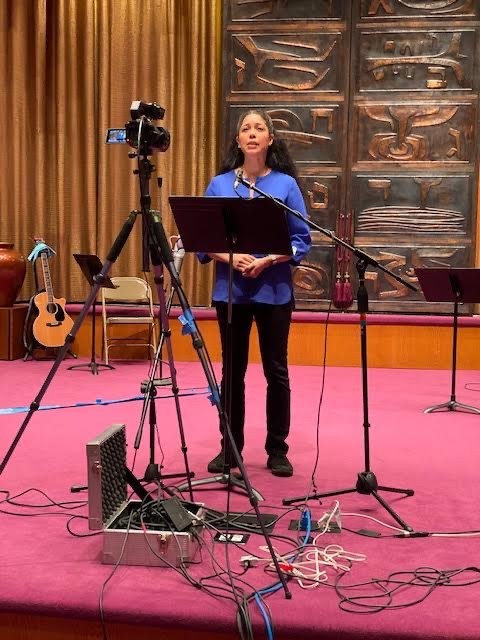 Wecht was charged with instrumentation and developing small groups from the larger pool of musicians.

Although Schiller, Wecht and Berman created the initial “Folk Shabbat” format, Berman is quick to credit the entire group of volunteers.

“I like to stress how this group has worked as a team,” she said. “There are times when Laura Daniels said, ‘Should we try this feel and this rhythm?’ Or we wanted to get some sort of sound and Roger was able to go with that.”

This year, an additional volunteer was needed to help complete the service — a videographer.

Temple Sinai continues to celebrate Shabbat online due to COVID-19, so “Folk Shabbat,” which has been live since its inception in 2018, has moved to a virtual format. 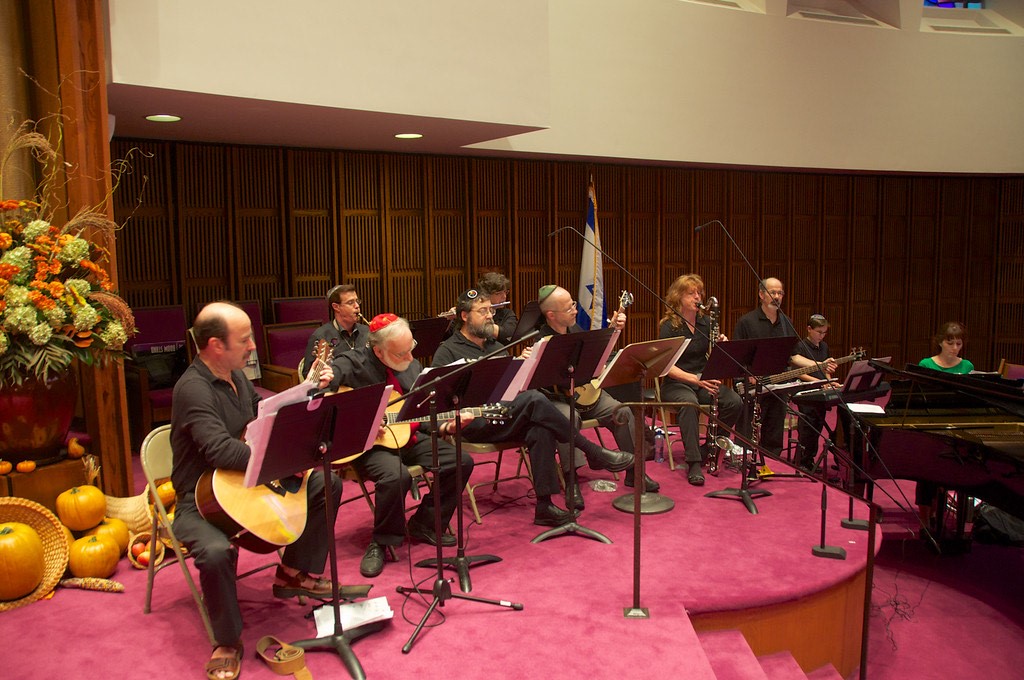 The Temple Sinai band rehearses for a “Mostly Musical Shabbat” before COVID-19 required more socially distanced rehearsals. Photo by John Schiller.
Folk Shabbat is just one part of the music tradition at Temple Sinai. The Reform congregation has featured a band since 2002 when then-cantorial soloist Sara Stock Mayo created “Mostly Musical Shabbat” under the direction of Cantor Henry Shapiro.

That band has evolved over the years and includes not just guitar, bass and drums, but sometimes also keyboard, clarinet, banjo, mandolin, accordion, tenor saxophone, trumpet and even violin. Add in the synagogue’s choir and individual vocalists and the result is a sizable band capable of creating a service that speaks to most of the congregation. 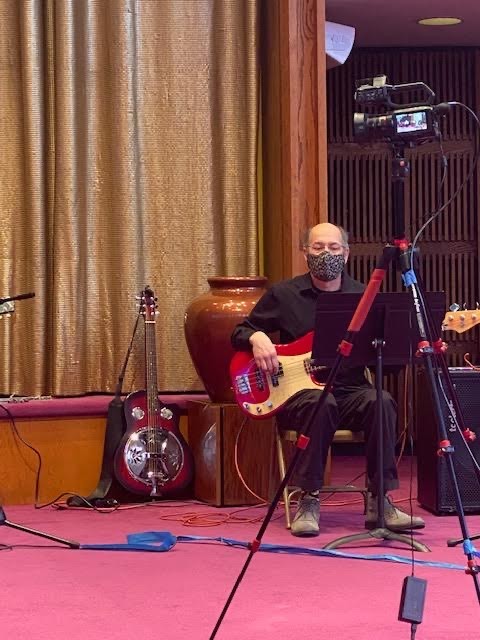 “We really do try to make it accessible to all,” he said, noting that the family-friendly services often introduce the congregation to new melodies for familiar prayers.

For Schiller, the use of music at a service does much more than simply entertain.

“Music is such a fundamental part of the way we connect with God, and I think we do it beautifully in so many ways at Temple,” Schiller said.

Temple Sinai’s “Folk Shabbat” service, sponsored by the congregation’s Brotherhood, takes place Friday, April 9 at 7 p.m. More information about the service can be found on the synagogue’s Facebook page. PJC