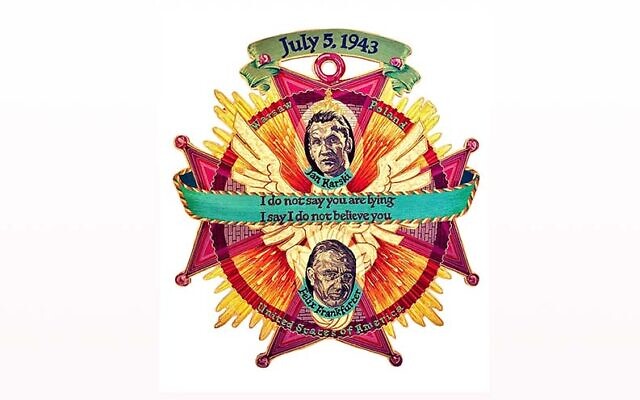 “I Do Not Say You Are Lying, I Say I Do Not Believe You" string and wax on wood. Photo by Robin Bernstein.

Robin Bernstein’s fiber arts series “Beauty and Terror” emerged from her online research following the creation of a piece about Germany and the Holocaust.

“I started wondering if people were talking about this honestly,” she said. “I went online and Googled it. The top three results were all Holocaust denial websites. I was shocked. It seemed to me that there was a community of Holocaust denial. So, I made another piece, then I made another one. By the fifth or sixth piece, I realized it was going to be a series.”

One of the pieces from her series, “I Do Not Say You Are Lying, I Say I Do Not Believe You,” was chosen to be shown as part of The Fiberarts Guild of Pittsburgh’s Fiberart International 2022. Pieces selected for the organization’s 24th exhibition can be viewed through Aug. 20 at both Contemporary Craft and The Brew House Association.

Created in red, orange, yellow, purple and green string and wax, Bernstein’s piece was inspired by a 1943 meeting between Jan Karski, a Polish diplomat smuggled into the Warsaw Ghetto and the Izbica Transit Camp, and Felix Frankfurter, a Jewish U.S. Supreme Court Justice.

In July of 1943, Karski recounted the mass starvation, dead and dying children, beating and transport of Jews he witnessed to Frankfurter, who listened politely to the diplomat and courier’s story before saying that he did not believe him. The justice did nothing to help the Jewish civilians murdered in the Holocaust.

The faces of Karski and Frankfurter, as well as the date of the fateful conversation, are included as part of Bernstein’s work.

Each of the pieces in Bernstein’s series includes a paragraph explaining the stories that inspired them.

Despite the ugliness of the subject matter, Bernstein said she tried to create the most beautiful works of art she could, spending up to six months on each piece.

“It’s thousands of tiny pieces of cut string that are pressed into wax,” she said. “The wax is holding the string; there is no glue.”

Artist Kirsten Ervin, a board member of the Fiberarts Guild, said only 45 pieces were chosen to be part of the exhibit from the more than 1,500 submitted. The works include artists from 17 states and 13 countries.

“It’s highly competitive,” Ervin said. “Only 3% of the applicants got in.”

The pieces were selected by a committee, according to Staci Offutt, the director of the exhibit.

“It’s the most historically, geographically represented international [exhibit],” Offutt said. “The work is from more places than ever before. Space-wise, we’re in two galleries. It’s been growing every year. It’s a beautifully laid out and installed show.”

“We saw immediate crossover with our CHUTZ-POW! Series in the use of powerful visuals to talk about these lesser-known stories of the Holocaust,” Holocaust Center Director Lauren Apter Bairnsfather said.

She noted that while fiber arts is new to the Holocaust Center, the use of art is not.

The Butterfly Project, which honors the 1.5 million children murdered in the Holocaust, includes custom quilts created by Louise Silk, and the Holocaust Center has held community talks with Ted Comet, whose late wife wove tapestries to process her experiences of the Holocaust.

“The horror and loss inflicted by the Holocaust is difficult, if not impossible, to encompass in narrative form,” Bairnsfather said. “Art provides a more visceral outlet to express all the emotions that come with engaging with this difficult history.”

For Bernstein, who is Jewish but doesn’t know of any family members murdered in the Holocaust, the “Beauty and Terror” series serves multiple functions — both for her and the wider Jewish community.

“The pieces are educational, but they’re also standalone aesthetic visual experiences,” she said. “They’re memorials. They’re honorific. They serve a lot. They are healing for me because I’m learning about these horrible events I’m studying, reading books. I’m immersed in the content, and it’s so difficult to make the pieces but very satisfying. I want to communicate what happened so that people will know.” PJC