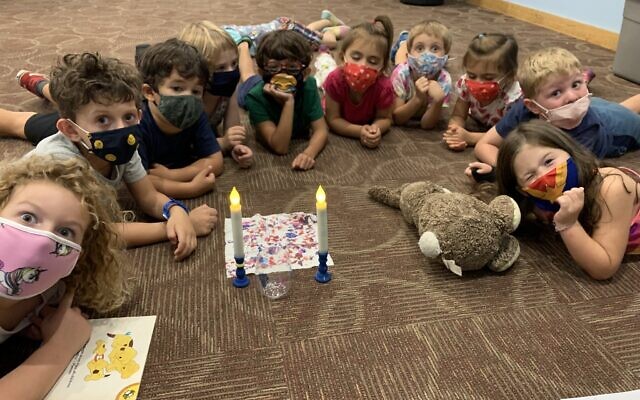 “They have mentors that work at dozens of camps, so being recognized, it’s humbling,” Cantor said. “It gives me goosebumps a little bit, and a tremendous sense of pride.”

The award recognizes an organization that has made transformational change to embrace a culture of philanthropy.

“It’s a nod to the accomplishments and all the hard work that the JCC and our staff and team have learned and accomplished,” said Fara Marcus, the JCC’s director of development and strategic marketing, adding that the JCC continues to implement lessons learned from training provided by the Grinspoon Foundation.

The JCC and EKC worked hard over the last three years to understand what philanthropy means, said Cathy Samuels, the JCC’s chief development and communications officer. Acknowledging that developing donors and cultivating philanthropy might be a daunting job for some, at the JCC, “it’s a happy job,” Marcus said. “It’s a mitzvah to go out and develop donors and people that care deeply about the work that we’re doing.”

It was at a JCamp 180 Conference three years ago that Samuels met Laurie Herrick and learned about the GIFT Leadership Institute program offered by the Grinspoon Foundation that taught fundraising. The program was filled, but Samuels convinced Herrick, JCamp 180 mentor, to allow her to join the training.

“That was sort of the beginning,” Samuels said, noting that the training, which includes webinars, role-playing, conversations and strategic development sessions, is an inspirational way to look at philanthropy.

The training placed an emphasis on the importance of philanthropy to the success of a camp, said Cantor.

“They helped us build an action plan for executing that culture of philanthropy and extending it beyond just the staff,” he said.

The JCC was able to incorporate the lessons learned into its broader mission and various departments, Marcus explained. She noted that the lessons taught are complementary to other Grinspoon programs in which the JCC participates including Life & Legacy and PJ Library.

“Anything Grinspoon we want to be a part of,” Marcus said.

“Jewish summer camp is one of the integral experiences for young people to predict a lifelong Jewish identity and connection to being Jewish,” explained Sarah Eisinger, director of JCamp 180, the management consulting arm of the Grinspoon Foundation assisting Jewish camps by providing one-on-one consulting, matching grants, professional training, an annual conference and leadership reports, evaluation and analytic work. “Summer camp is one of the pillars of Jewish continuity.”

EKC, she said, has been involved in all of the foundation’s offerings.

“They distinguished themselves in our GIFT Leadership Institute program and in general with their embrace of the elements of a culture of philanthropy, and what it means to think from a place of abundance and transform yourself from thinking from a place of scarcity, which is how a lot of nonprofits function,” said Eisinger.

JCamp 180 chooses the award recipient from the more than 100 overnight and 23 day camps across North America with which it works. Nominees are evaluated according to the organization’s four characteristics of a culture of philanthropy: That a culture of philanthropy is integral to the organization’s mission; everyone shares responsibility for the mission; deep donor partnerships; and community engagement.

“The Emma Kaufmann Camp is such an integral part of the Pittsburgh JCC,” said Doron Krakow, president and CEO of the JCC Association of North America. “To me, it was not a surprise that the Pittsburgh JCC would be the first [JCC camp to receive the award] because of the unique nature of how close, cohesive and tight-knit the Pittsburgh Jewish community is and how big a part the JCC Pittsburgh plays. So, evolving a culture of philanthropy that transcends camp in the JCC community is a natural byproduct of the way the community in the JCC already work.”

Marcus noted that any sort of giving begins and ends with relationships.

“It’s about building relationships and partnerships and trusting the people who believe in you and the organization and want to better the organization and be a community,” she said. “We’ve learned by creating this culture of philanthropy that we’ve deepened our relationships with so many community members in ways that we just never even knew were possible. Whether it’s by a donation, or by volunteering or by telling stories, that’s the overall culture.”

“The JCC Association are incredibly proud that the Pittsburgh JCC was recognized in this way,” said Krakow. “It’s a role model for the entire field.” PJC