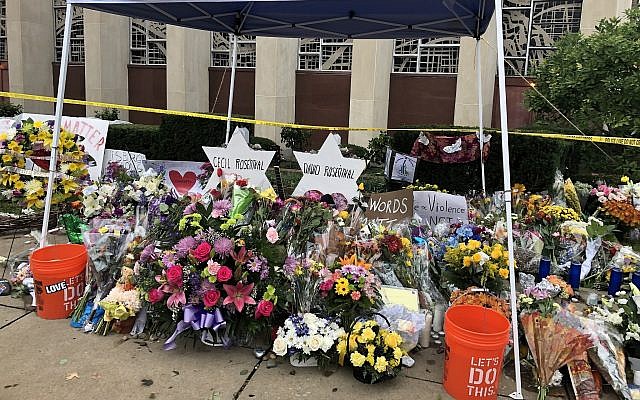 A vigil outside the Tree of Life building. (Photo by Jim Busis)

U.S. District Judge Donetta Ambrose ruled on June 21 against the man accused of murdering 11 Jews in the Tree of Life building in 2018, denying his motion to compel the government to produce evidence of monitoring his online activities prior to the attack.

The alleged shooter’s motion, filed in March, asked the court to require federal prosecutors to produce any evidence of government monitoring, arguing that it might be used as a mitigating factor in the penalty portion of the case.

The prosecution is seeking the death penalty. The alleged shooter shouted antisemitic slurs during his attack on members of the three congregations housed in the building at the time: Dor Hadash, New Light and Tree of Life*Or L’Simcha. He also engaged in antisemitic rhetoric on Gab, a far-right social network, according to prosecution filings.
The judge rejected the defense’s argument that government awareness of one’s potential for violence could be considered a “mitigating” factor when determining a sentence.

“Such evidence would not tend to prove or disprove a fact or circumstance which a fact-finder could reasonably deem to have mitigating value,” Ambrose wrote in her nine-page opinion. “It does not point to any aspect of the defendant’s character or record or circumstances of the offense that would diminish the defendant’s moral culpability. Any knowledge that the government, in whatever capacity, may have had regarding the defendant’s activities on Gab.com prior to the crimes at issue, is irrelevant.

“The Government was not involved in the offenses charged and any alleged notice it may have had of the Defendant’s online activities does not otherwise lessen or explain the Defendant’s conduct,” Ambrose added.

The case has not yet been set for trial, but pretrial motions must be filed by July 19, according to court documents. PJC