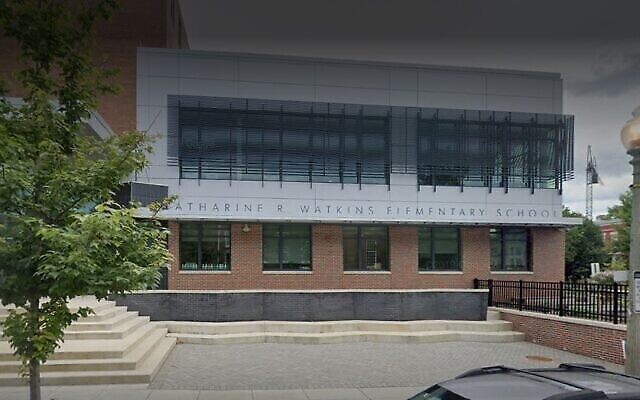 The Watkins Elementary School in Washington D.C. where third-grade children were made to reenact scenes from the Holocaust in December 2021 (Screencapture/Google Maps)

A staff member at a Washington D.C. school has been suspended after making third-grade children reenact scenes from the Holocaust, including getting them to pretend to dig mass graves and shoot victims, and telling them the Germans were angry “because the Jews ruined Christmas,” parents and officials said Sunday.

The incident occurred Friday at the Watkins Elementary School in the US capital, the Washinton Post reported Sunday, citing an email from school principal MScott Berkowitz.

The children had been in a library class working on a self-directed project, when the staff member, who was not identified, made them reenact scenes from the Holocaust. It was not clear what prompted her to do so.

“There was a lot of sobbing and crying and distress and then momentarily we got an email to say that the children had reenacted the Holocaust,” one parent told the Fox5DC TV station. “This included the trains, dying in gas chambers, playing Hitler and mass graves.”

Some children were given specific roles, including one Jewish child who was told to portray Nazi leader Adolf Hitler and then told to pretend to commit suicide at the end of the exercise, as Hitler did, the parent of the child told the Post.

Others were told to dig their classmates’ mass graves and simulate shooting the victims.

The instructor allegedly made antisemitic comments during the reenactment. A parent said that when the children asked why the Germans did this, the staff member said it was “because the Jews ruined Christmas,” the Post reported.

Another student was told to pretend to be on a train to a death camp and act as if he was dying in a gas chamber, the child’s parent told the Post, declining to identify themselves or the child. In another scene, he was told to simulate shooting his classmates.

“I want to acknowledge the gravity of this poor instructional decision, as students should never be asked to act out or portray any atrocity, especially genocide, war, or murder,” Berkowitz said in the email.

The instructor reportedly told the children not to tell anyone about it, but they told their homeroom teacher.

“I think it’s traumatic, this is a terrible corruption of a historical trauma that was inappropriate for eight and nine-year-olds to learn about in this way and I am outraged,” the mother told Fox5DC.

A complaint was then filed with DC Public Schools’ Central Equity Response Team.

“This was not an approved lesson plan, and we sincerely apologize to our students and families who were subjected to this incident,” a spokesperson for DCPS said, according to the Post.

The entire class met with the school’s mental health response team after the incident, according to Berkowitz’s email.

The staff member has been placed on leave, pending an investigation.

The Anti-Defamation League’s Washington Chapter condemned the incident and said it would be offering “resources and support to help promote healing &and education.”

“We’re horrified third-grade students were instructed to reenact scenes from the Holocaust. Simulation activities trivialize the experience of victims and often reinforce stereotypes,” the ADL said.

There have been several antisemitic incidents in the D.C. area in recent months.

Last month vandals broke into a fraternity house in George Washington University in Washington, D.C., and desecrated a replica Torah scroll, tearing it apart and covering it with detergent.

At the Woodrow Wilson High School in northwestern D.C., swastikas and the N-word were scrawled on walls earlier this month. PJC