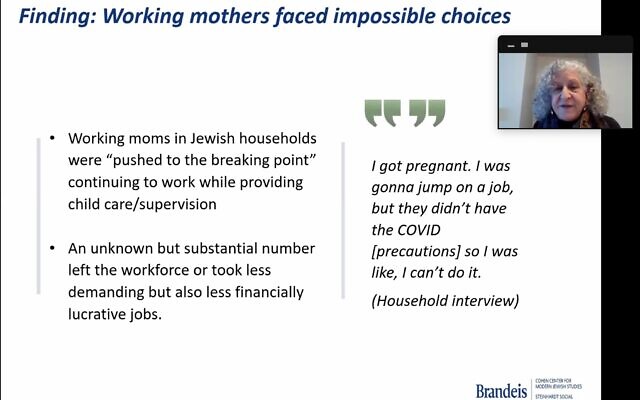 Fern Chertok shares the results of the new study on economic vulnerability during a webinar on Jan. 13 (Screenshot by Toby Tabachnick)

Even before COVID hit, close to one quarter of Jewish households in Pittsburgh considered themselves poor, nearly poor or just getting by, according to the 2017 Greater Pittsburgh Jewish Community Study, conducted by researchers at Brandeis University and commissioned by the Jewish Federation of Greater Pittsburgh.

New data presents a starker picture, as economic vulnerability has spread to an even broader swath of Jewish Pittsburgh.
Last summer, Brandeis researchers took another look at Pittsburgh’s Jewish community to see how the landscape had changed since the pandemic started. The quantitative study conducted during four weeks in June 2021 revealed there are many people “who are newly economically insecure,” said Raimy Rubin, manager of impact management for the Jewish Federation of Greater Pittsburgh.

Those with new needs include people who were economically stable prior to the pandemic but had to dig into their savings or accrue credit card debt to pay their bills, Rubin said. “They are kicking the can down the road,” he said. “That is a new profile that organizations in our community need to reflect on and decide how to deal with.”

Two months after the start of the pandemic, in May 2020, Brandeis researchers from the Marilyn and Maurice Cohen Center for Modern Jewish Studies conducted a study of how the pandemic was affecting those in Jewish Pittsburgh. At that time — due to strong government benefits, including stimulus checks — they did not find a lot of new need in the community, although those who already were economically vulnerable “got knocked down a rung on the ladder,” Rubin said. But the newest study shows that since those early months of the pandemic, things have changed.

Fern Chertok, part of the team that conducted the June 2021 study, presented the most recent findings on Jan. 13 during a webinar for Pittsburgh’s Jewish communal professionals.

The researchers tapped several sources for information, conducting interviews with Jewish professionals and lay leaders “who were knowledgeable about economic vulnerability,” Chertok said. They also interviewed 12 households that were experiencing economic insecurity.

The researchers discovered “the profile of financially insecure families changed and expanded,” Chertok said. While those families who were already economically vulnerable continued to be economically vulnerable, “there were also many households that were suddenly thrust into economic instability. These were households who owned cars and homes and had seen themselves as economically stable previously.” Among those hardest hit were those in “entertainment, the business-to-business service world and food service.”

Chertok said it was notable that households new to financial insecurity didn’t describe themselves as poor, and “they didn’t think they were the people for whom help was being devised. But they also didn’t know what to call their situation.”

Some had lost a job or had their hours reduced during COVID, but there were also indirect ways that finances were affected, Chertok said. Households expanded during the pandemic, with many young adults returning home. Parents who already paid for a college student’s room and board usually didn’t get that money back, and were now paying for the increase in utilities and food associated with their child being back in the household.

Other households lost supplemental sources of income due to COVID — side jobs like pet care, housesitting, or selling goods and services online, Chertok said.

At the same time that sources of income were diminishing, child care costs increased substantially and fewer options were available, she continued. Many families lost access to their child care, but were still paying tuition for fear of losing their spot.

Because of COVID risks, older family members were not available to help with child care and, as a result, a substantial number of Jewish women left the workplace or took less demanding and less financially lucrative jobs, Chertok said.

“That is going to play out as a factor throughout the rest of their work career,” she said.

Because most experts predicted the pandemic would end within three to six months, many families made financial decisions that might have worked out well in the short-term — for example, accruing credit cards debt, depleting savings accounts, or borrowing from their retirement or children’s schooling accounts.

“If this had been a three-month event, that would have been something they could recover from over a short period of time, but it wasn’t,” Chertok said, noting the devasting affect that compounding credit card debt, and loss of retirement fund interest, has on financial health.

‘Shame and guilt’
When the researchers asked people how comfortable they were seeking help, “clearly shame and guilt were barriers,” Chertok said. “The Jewish households we spoke to, especially those who were new to economic insecurity, didn’t feel like the services were for them. They felt like these were services intended for somebody else who was impoverished because they didn’t identify as poor. And when they did identify themselves for services, they were embarrassed about it and not comfortable in that situation.”

Jewish Pittsburghers found that applying for secular services, like SNAP and unemployment benefits, was daunting, Chertok said. The paperwork was cumbersome, and many families were concerned that applying for government assistance might affect their credit score.
Recovery from the financial fallout of COVID is expected to be slow, Chertok said, and for most families it is projected to take years, “because they are servicing significant debt, and that debt is going to cast a shadow on their economic situation for a fairly long time unless they can eliminate or pay down the balance.”

Moving forward
The Brandeis researchers made a number of recommendations for Pittsburgh’s Jewish community as it emerges from the financial morass caused by COVID, including: raising awareness of economic insecurity and normalizing it so that “it is not an unusual or embarrassing or shameful situation”; having a single portal to help find all resources available in the Jewish community and the secular community; offering the services of financial coaches; and helping families strategize on how to become economically secure.

Other issues that existed prior to COVID that Pittsburgh communal leaders should address, Chertok said, include providing affordable child care; helping those in the gig economy determine how to secure their financial future; and advocating for workplace gender equality.

One of the most important JFunds initiatives to assist those dealing with financial insecurity is free financial coaching, said Aviva Lubowsky, director of marketing and development for the HFLA and a spokesperson for JFunds.

JFunds has contracted with Shay Port, a financial coach, who helps people identify where they can access public support, “how to manage their new normal,” and how to address debt, Lubowsky said. Anyone can meet with Port for free.

Funding for Port was provided by The Fine Foundation, the Jewish Women’s Foundation of Greater Pittsburgh and the Federation’s COVID relief fund.

Lubowsky emphasized that a person doesn’t have to be “needy” to use Port’s services.

Other accommodations by JFunds agencies to help ease the financial burden created by COVID include an increase in the amount of funds offered to those seeking help from the Jewish Assistance Fund, which provides funding for pressing and immediate needs without repayment; expanding the parameters of what HFL loans can be used for to include bill payment and credit card consolidation; and offering Food Pantry critical needs case managers to help people identify the public support they qualify for, Lubowsky said.

“We stand ready to embrace the community with all this support,” she said. PJC