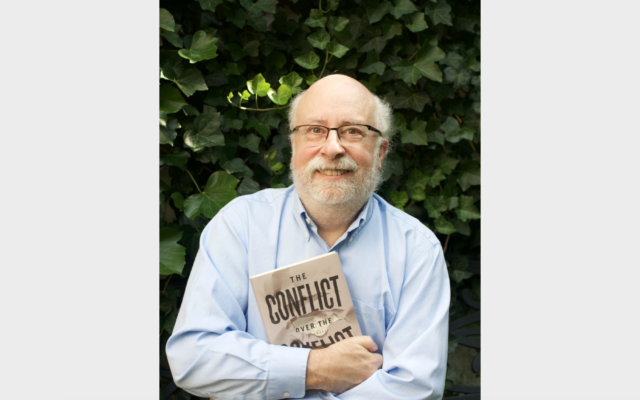 Kenneth Stern with a copy of his book "The Conflict over the Conflict." Photo by Emily Stern.

Students are being quarantined from difficult ideas and issues, argues Kenneth Stern in his new book “The Conflict over the Conflict: The Israel/Palestine Campus Debate” (New Jewish Press, May 2020).

The defense attorney and author, 67, has experience with this “conflict over the conflict”: He is the director of the Bard Center for the Study of Hate, and he helped draft a working definition of anti-Semitism while serving as the American Jewish Committee’s anti-Semitism expert.

Stern knows the challenges involved in productively discussing the Israeli-Palestinian conflict and details them in his book.

“One of the main points of the book is that you’re sending kids to college to really wrestle with ideas,” he told the Chronicle. “And instead, there’s been a lot of push to the idea that, ‘Oh, students shouldn’t hear things that make them discomforted.’”

He notes the sense of betrayal that many Jews feel when, after years of Jewish education, they learn for the first time that there’s an Israeli occupation only when they get to college.

The opening chapter of the book, titled “Thinking about Thinking,” explores the human need for simplicity.

“People gravitate toward one [view] or the other, whereas to understand this conflict, they have to really grapple with both,” he added.

The way Stern sees it, when pro-Israel or pro-Palestinian advocates unilaterally put forth their case, they minimize the other side’s.

“Real history is the ability to navigate all these views at once,” Stern quotes professor Seth Anziska in the book.

But the human need for simplicity works against this ambition, he cautioned.

“We get put into bubbles where we see the world in a certain way and that people are going to express things in a very narrow way,” said Stern. “[Yet] usually, things are a lot more complex, and justice isn’t only one flavor.”

He remembers feeling upset when Hillary Clinton lost the 2016 presidential election. His response: “I have to watch a lot more Fox News.” His friends thought he was nuts, he said, but he felt it was important to better understand the people who voted for Trump.

Stern is not a fan of cancel culture, of stifling certain views or opinions.

“I do not see that as a healthy thing for a democracy,” he said. It’s not that he wants bigotry to be overlooked – he’s just opposed to the notion of questioning whether somebody should be able to have a platform.

For example, while Stern disagrees with some of the principles underlying Students for Justice in Palestine, he thinks SJP groups should be allowed to host an Israeli Apartheid Week on college campuses.

It’s the same with speakers. He considers it worthwhile for organizations to invite BDS proponents, hear them lay out their case and then question them directly.

“Both sides are trying to shut down the other from speaking when they should be avoiding attempts to censor,” he said.

“There’s a disheartening and I think dangerous aspect of it here that you don’t want to allow people to make mistakes or to grow,” he said. That said, Stern acknowledges that different cases necessitate different responses and that it’s important to distinguish between irredeemable hatred and intellectual exploration.

Students should have the ability to do things that are wrong, to try on ideas without fearing the shopping will come back to haunt them, according to Stern.

“Faculty – and especially students – need the intellectual space to think ‘outside the box,’ to try out ideas, and to be wrong,” he wrote in the book. “Without a culture that allows for, in fact encourages, intellectual error, progress will be difficult, if not impossible.”

The college campus is the perfect place to consider the conflict, according to Stern.

“An educational environment is really the ideal one – and this is an ideal issue – to teach those critical thinking skills of how do we know something, how do we deal with ideas that we might find difficult,” he explained.

At the end of “The Conflict over the Conflict,” the author discusses a class taught by Paul Scham at the University of Maryland simulating the Peel Commission of 1936-1937. Students adopted different personas: Israel’s first prime minister, David Ben-Gurion, Zionist Revisionist founder Ze’ev Jabotinsky, Mufti of Jerusalem Hajj Amin al-Husseini, and others.

“They went into it thinking ‘Gee this is great, we’re gonna figure out how this conflict could’ve been settled in the 1930s when Lord Peel was there,’ and they come out of it saying, ‘Gee, now we understand why 80 years later, it hasn’t been settled,’” said Stern. “Which to me is the purpose of education – to really grapple with [topics].”

The book ends with a blueprint for how to navigate the “conflict over the conflict” on campus.

“If Jewish organizations want to reduce antisemitism on campus, rather than try to suppress pro-Palestinian speech, they should instead invest in education– teaching about antisemitism, about hatred, and about how to have difficult discussions,” Stern wrote.

He advocates for the integration of Israel studies and Palestine studies and for teaching hate in an academic setting, like at the Bard Center for the Study of Hate, which he directs.

He concluded the book with this:

“I don’t expect that partisans on either side of the Israel/Palestine campus debate will stop trying to arm students to be proxy warriors in this battle, and stoking hatred while they do so.

“I hope some, who profess to care about these young people and value our colleges and universities, see the wisdom in another approach: innovating ways to increase knowledge, while protecting and promoting academic freedom and free speech.” PJC