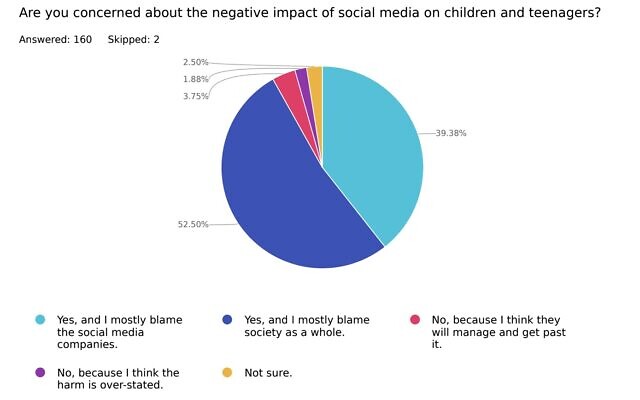 Last week, the Chronicle asked its readers in an electronic poll the following question: “Are you concerned about the negative impact of social media on children and teenagers?” Of the 162 people who responded, a vast majority, 91%, said “Yes,” with 52% blaming “society as a whole,” and 39% mostly blaming the “social media companies.” Only 6% of respondents said they were not concerned, with 6 people saying, “I think they will manage and get past it.”
Thirty people submitted comments. A few follow.

It disturbs me a great deal but I just don’t know how we would go about putting the genie back in the bottle. And do we, as parents, not have some controls over the content our children are consuming?

Going through my teenage years was difficult enough to navigate in the ’60s and ’70s when the internet and Twitter were not an issue. Social media, with its cowardly anonymous comments and its total lack of courtesy and respect, has made it exponentially more difficult for today’s teens. There has to be some accountability.

Parents have abrogated their responsibility by not checking to see what their teens and preteens are posting.

I blame society as a whole because everything has become acceptable with no accountability.

We need more systematic studies of the impact of social media on all ages.

A society that does not value education is the culprit.

Social media will give people what they want. And as you can clearly see from school, kids have a lot of bullying in their lives. Is it any wonder it’s the same online? Schools need to treat phones as if they are part of school, with monitoring and discipline. Phones manufacturers should make it easier for parents and teachers to read their kids’ messages, instead of locking down the devices.

Social media companies certainly play a key role. However, the notion that every human — no matter young or how immature — should be using a phone for self-entertainment and social interaction raises questions about parental permission, role modeling and lackluster monitoring. It is probably naive to expect a company to stomp out, for example, individual bullying.

Social media can intensify the peer-to-peer stress that can falsely elevate some kids while torturing others. Same dynamics as through the generations, more potent weapons.

Like most things, social media can be very, very good and it can be very, very bad. Parents have the responsibility to establish guidelines for their children and teach them to navigate them. Being off social media on Shabbat is an amazing corrective, cutting down use by 1/7. Add in all the chagim and you’ve got a start in finding balance

I am also highly concerned about the negative impacts of social media on adults, given how much Facebook has led to radicalization. It helped feed the violent assailants of Jan. 6, the antisemitic violence of Oct. 27, and the BSD movement. It is destructive for all parties, not just teenagers and children, and I am glad never to have been on Facebook. PJC