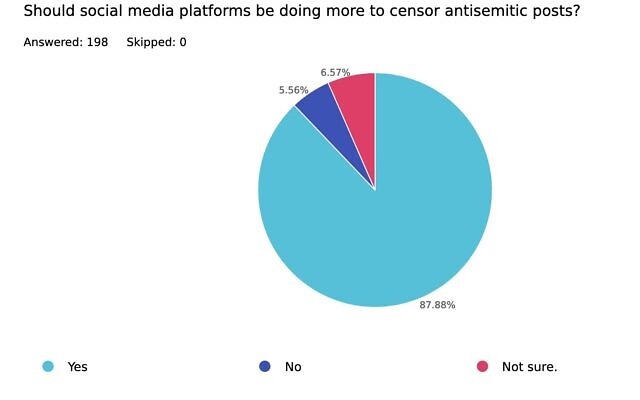 Last week, the Chronicle asked its readers in an electronic poll the following question: “Should social media platforms be doing more to censor antisemitic posts?” Of the 198 people who responded, 88% said yes and 5% said no. Seven percent said they weren’t sure. Comments were submitted by 41 people. A few follow.

We still have freedom of speech, even if we do not like what is said.

I know we have freedom of speech but if it hurts others we need to take those that are hateful
down.

It’s way overdue. Also, we need to “out” these dangerous social media platforms so unsuspecting visitors know in advance not to go there, even out of curiosity.

Censorship is wrong regardless of the subject. If we draw lines, “they” will draw lines that we
don’t like.

I don’t trust a for-profit company to decide what is or isn’t bigoted, and companies trying to do that have caused a lot of harm with false positives. Censor little centrally and empower consumers to decide — give us better filtering controls. Besides, we need to know what bigots in positions of power or running for office are saying; imagine the damage come November if Gab had suppressed Mastriano’s garbage and people thus thought maybe he was OK.

Hate speech of all kinds should not be allowed in cyberspace! It should be criminal!

I don’t believe that the government should curtail speech. But social media platforms have to decide what sort of culture they want to foster. If they are “Truth Social,” there is a specific audience that they have in mind; Facebook Twitter and Instagram, just to name a few, have a much bigger reach and, I believe, more responsibility to moderate hate speech.

We need to honor the First Amendment right to freedom of speech, but reasonable people need to agree what crosses that line, and it shouldn’t be that difficult.

I’m not such a fan of social media censoring anything not illegal. But if they are going to censor (and they do), then they need to do a better job of censoring antisemitism; they seem to censor
everything except for that.

Censorship never helps. It just drives it underground. I’d rather know what people are thinking and take the pulse of current levels of antisemitism. It’s naive to believe censorship would help reduce it. PJC