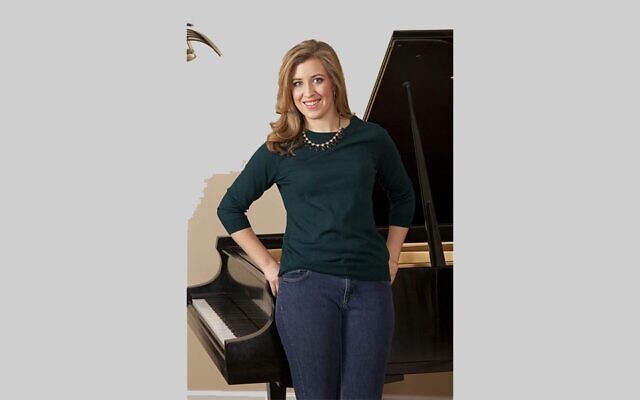 Stefanie Greene comes from a family of highly accomplished musicians, but although she has chosen a slightly different path, she is far from a black sheep.

Her mother and father are both concert pianists who met at the Yale School of Music, her sister plays the violin and viola professionally and her brother is a studio musician recording movie and TV scores in Los Angeles.

Greene was poised to join her family in the world of commercial music before having what she described as a “burning bush moment.”

Greene was living in her hometown of Chicago, working full-time as the director of digital marketing for a health and wellness startup and part-time at Congregation Beth Emet The Free Synagogue in Evanston, Illinois, as a song leader while auditioning for various opera productions.

“I was feeling very happy from the weekend – leading services and working at the synagogue – and God spoke to me,” Greene recalled.

The message she heard: “You’re supposed to be a cantor and it’s how you are going to change the world.”

In 2016, Greene began her transition from the world of professional opera to sacred and religious music. She now is a cantorial intern at Temple Ohav Shalom in Allison Park, having honed her skills along the way in New York and Israel.

The musical journey is as much about finding her own identity as it is about deciding on a career path.

Although she has sung for congregations of various denominations, she grew up in the Reform movement and considers the North Shore Congregation Israel, a Reform congregation in Glencoe, Illinois, as her “home congregation.”

That congregation also was home to Cantor Richard Cohn, the current director of the Debbie Friedman School of Sacred Music of the Hebrew Union College-Jewish Institute of Religion, where Greene now is a student.

In 2013, while mourning the loss of her grandmother and with feet firmly planted in the secular operatic world, a voice teacher’s words inspired Greene to connect her singing to her Judaism.

“I had a voice teacher tell me, ‘Stefanie, you’re not just any American soprano. You’re Stefanie, you’re Jewish. You need to lean into that part of yourself.’ I really dove into that,” she said.

After a trip to Israel in 2016, Greene became involved with the Jewish United Fund Young Adult’s Division and began attending services on a regular basis.

Realizing she had a lot of non-Jewish friends who were opera singers and getting High Holiday gigs, it dawned on her that, as a Jew, she could be seeking those jobs as well, she said.

It was then that Greene found out about the opening at Beth Emet.

The Chicago native reached out to HUC’s Cohn who supported her decision to become a cantor. “He said, ‘This makes so much sense for your life’ and it just felt right.”

Greene is in her fourth year of cantorial school. She spent the last two years in New York attending HUC. Before that she studied in Israel.

When she connected with Ohav Shalom, the original plan was for Greene to live in New York and fly to Pittsburgh twice a month to work at the temple. As luck would have it, Greene’s boyfriend moved to Pittsburgh for a job opportunity and then, in June of this year, HUC announced it was going virtual. Seeing no reason to stay in New York, Greene, 31, reached out to Ohav Shalom’s Rabbi Jeremy Weisblatt, who felt a move to the Steel City would allow her to do more with the congregation. She calls the move “an awesome opportunity.”

In addition to her cantorial duties, Greene will be assisting with the congregation’s b’nai mitzvah seminars and teaching sixth- and seventh-grade Jewish studies, leading music at the religious school and possibly teaching a few adult education courses.

Greene is the only HUC cantorial intern currently working at any of Pittsburgh’s area Reform synagogues, noted Weisblatt. He sees the position as an important part of Ohav Shalom’s goal of being a “learning and mentoring congregation.”

“She’s really being integrated all across the congregation, which is important to a successful internship while allowing us to learn the latest things happening at the college,” the rabbi said. “We’re very lucky she has the talent and experience to work in all those different ways.”

The cantorial intern, who was living in Israel at the time of the Unite the Right rally in 2017, hopes to be part of the healing process for Jewish communities in the face of the rise of anti-Semitism and hate around the globe.

“As an opera singer, I was doing a lot of auditioning and I was feeling so burnt out,” she said. “You walk in and say, ‘Hello, my name is Stefanie and I’m going to sing an aria,’ and you leave. They don’t know anything about you. You go to the opera and it’s beautiful, but I have so much more of myself to give and share with people. I know that the world needs healing right now and I want to use my music to help the world heal and bring Jewish communities together.” PJC