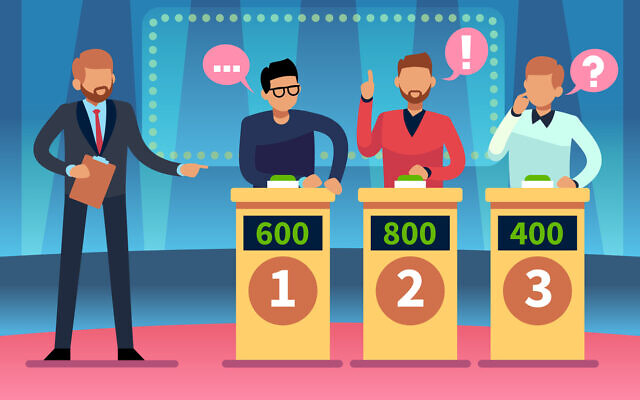 A former “Wheel of Fortune” contestant, he has been trying since the mid-‘90s to get onto “Jeopardy.” On his honeymoon, he dragged his bride, Aviva, to a taping of “The Price Is Right.”

“If I hadn’t been a doctor, I would’ve been a game show host,” laughed Lubowsky, an endocrinologist whose children attend Community Day School.

So, it’s no surprise that four years ago, Lubowsky launched “Clues & Schmooze (With Some Booze),” an evening of fun and adult hijinks at Congregation Beth Shalom. After being canceled because of the pandemic in 2020 and going virtual in 2021, the event is back for its fourth iteration — in person — on Saturday, March 12. Doors open at 7:30 p.m., and trivia runs from 8:15-10:30 p.m.

The event is open to everyone, Jewish or not Jewish, Lubowsky said, and the event draws many who are not members of Beth Shalom. Teams of three to six participate; there’s also a 50/50 raffle, snacks and an open bar. Participants must be 21 or older.

The cost is $30 per person; advanced registration is required.

“The game is essentially ‘Jeopardy’-style questions,” Lubowsky said. “The first year I did it, I made it too academic. After that, I took the feedback and decided it needs to be less hard, more fun — people want it more lighthearted.”

People also come up with quirky monikers for their teams, which can be pre-planned or just selected at the event itself.

Past entrants have included Nerdy by Nature, Beverly Hills 15217, Let’s Get Quizzical and Wait, Wait, Give Us a Minute. There are also some Jewish-themed names like Rabbi and the Dybbuks, Rabbi M and The Master G, and Rabbisymal.

David Chudnow, who has attended the event twice, admits he’s “a trivia buff.” Clues & Schmooze understands him, he said.

“It’s just an enjoyable, low-pressure social event,” Chudnow, a member of Shaare Torah, said. “I think more shuls should have events like this.”
Ed Mistler, a neurologist from Squirrel Hill, said he is trying to recruit people for his team, which has been evolving since he and his wife first participated in 2018.

“Some good categories for me? Things you learned in school, like world geography,” said Mistler, a member of Beth Hamedrash Hagodol-Beth Jacob Congregation, the “Downtown Shul.”

“I’m pretty good at movies [and] I’m always looking for people to join my team to supplement on books, art,” Mistler said. “And I’m not good at sports at all.”

Mistler said the fast but casual pace lends the event a bit of electricity.

“And the questions are wonderful,” he added. “I still remember the third-most common ice cream flavor in the world: cookies and cream. After vanilla and chocolate. I got it wrong. I’ll never forget it.”