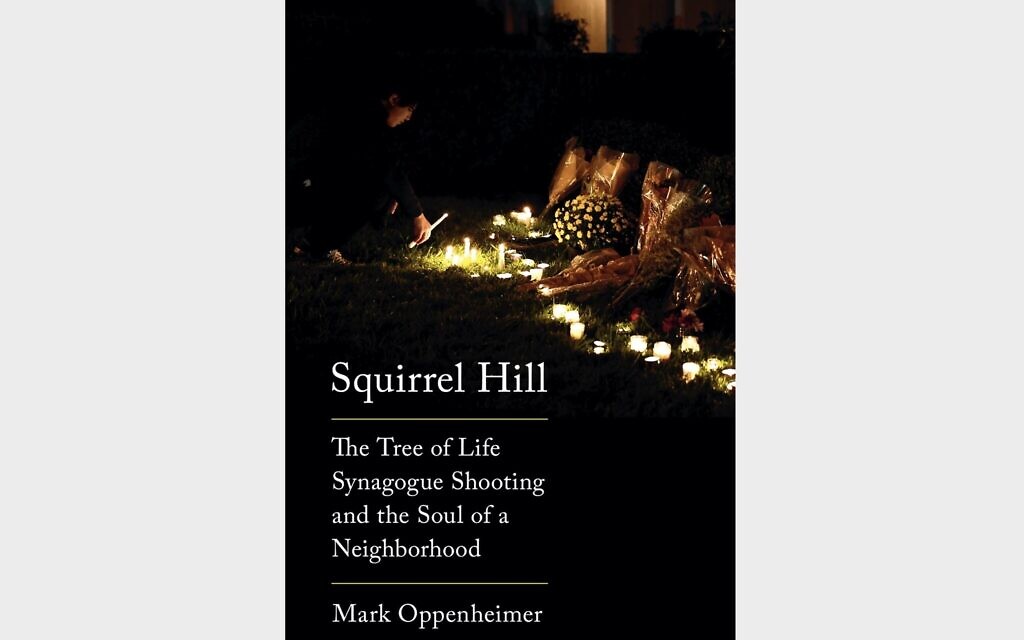 Journalist Mark Oppenheimer’s new book, “Squirrel Hill: The Tree of Life Synagogue Shooting and the Soul of a Neighborhood,” recounting the Pittsburgh synagogue shooting and its aftermath was released on Oct. 5.
A selection from the book, selected for the Chronicle by Oppenheimer, follows.


Nina Butler is a former principal of Hillel Academy, one of two Orthodox day schools in Squirrel Hill, and a member of the Orthodox holy society. She was one of the shomrim who kept watch over the bod-ies at the medical examiner’s office, comforting the departed souls with prayers. The Saturday evening of the shooting, after the prayers concluding Shabbat, she went to stand outside Tree of Life, where she learned for the first time that Cecil and David Rosenthal were among the dead. Butler and her husband, Danny, have two grown sons with the same disability that the Rosenthal brothers had. Soon after she got home, her telephone rang. It was Daniel Yolkut, her rabbi at Poale Zedeck synagogue. He said that his phone was ringing off the hook, and he was having trouble fielding all the calls from out-of-towners who wanted to help.

“He said, ‘Nina, do something about all these people calling me.’ So I created a really basic Google form.” The form asked questions like, “How many are in your group?” “When do you plan to arrive?” “When do you plan to leave?” and whether the visitors needed kosher food, synagogue service times, and information about the funerals. After she created the form that night, she sent it to Yolkut, who liked it and shared it with Daniel Wasserman, the leader of the holy society and the rabbi of the other large Modern Orthodox synagogue in Squirrel Hill. Wasserman liked the form, too, and so they shared it with the email group of the Rabbinical Council of America, the national body of Modern Orthodox rabbis. By Saturday night, Butler was suddenly the coordinator for “every shul and every school” that wanted to send people to Pittsburgh.

Before long, Butler’s form had been filled out by forty-two different groups that wanted to visit, mainly synagogues and high schools, from New York, New Jersey, Maryland, Los Angeles, and elsewhere. A woman from Israel had no immediate plans to come but wanted to offer her services: “My name is Rena Ariel. I live in Israel and lost my daughter Hallel in a terror attack 2 years ago. She was 13.5 years old. If you need any help speaking to groups or schools, we are here.”

Many people were planning to bring groups to the funerals and to visit families who were sitting shiva. The tone of the replies varied; some seemed to understand that they might help best by staying away, or by sending food or money, while others were intent on coming: “——— here,” one man wrote, “formerly of Harrisburg, now Memphis, TN. I’m so sorry to reach out to you regarding this horrible tragedy. My shul would like to find some way to embrace the families of the victims. Is there a way for us to sponsor a shiva meal/meals? Can you think of any way we could be helpful from afar?”

“We are a group of rabbis from Baltimore who would like to visit as many aveilim”—mourners—“as possible. Wednesday is the best day for us, but if you think that is not a good idea or if you can provide any direction as to how we can maximize our short time in Pittsburgh, it would be greatly appreciated. Thank you.”

“We’re contemplating bringing a group of Columbia/Barnard students. We may have some flexibility on dates so I wanted to see if there were particular days/times/shivas/funerals at which visits would be more appreciated before solidifying any details on our end. Thank you for organizing this!”

“Just a general sense of if our presence there would be supportive and welcomed, and the best time to come.”

“Please can you send me the names of those in hospital and the addresses of the hospitals. Thank you.”

Very quickly, Butler realized that the best thing she could do was tell people to stay away. She summed up the message she gave them: “‘We are the warmest, most welcoming community in the country: please don’t come. Please, please don’t come.’” She was protecting two groups of people: the Orthodox Jews of Pittsburgh, who were already going to have their hands full guarding the bodies, cooking kosher meals, hosting relatives, and supporting one another in a time of communal grief, but more especially the families of the dead, who would not want strangers coming to the funerals and then their houses. And they especially would not want to receive Orthodox Jews whose strictly traditional mourning customs would seem alien.

The dead, after all, were not Orthodox. Butler had to tell those eager to visit “that not only have none of the shivas been announced yet, but when they are, these are not going to be shivas like what you are picturing”—shivas where the mourners have covered all the mirrors in the house, to ensure against vanity, and sit quietly on the traditional low stools, then pray with a quorum of ten. “Some of them, their shivas might look like a cocktail party. Some of them might not have shivas. I said, ‘If these people have a bunch of men dressed in black suits with white shirts and big black hats come in, sit down, and just stare at them, that would be disastrous. They won’t know where to hide. . . .
They really don’t want to meet new people.’”

For the most part, the potential visitors whom Butler reached got the hint and stayed away. But many didn’t. The Jewish college student from a big state university who wanted to show his face just drove on up to Pittsburgh—that was a typical case. And some of the Jews whom Butler did reach did not take her advice kindly. She mentioned someone at “one very exclusive New York [City] day school” who “got very upset.” “ ‘But you don’t understand,’” the teacher said to her. “ ‘We have three buses of our best students that we want to send to you. How are you saying no, these are our best, best students!’ I said, ‘But this is not about you, and it isn’t about your best students. It’s about these mourners and what they need this week.’”

One Sephardi Jewish man from New York could not help himself. “I know that you don’t really want us to come,” he told Butler, “but I just, I have to be there. I can’t be anywhere else, so don’t be upset with me, but I’m coming anyway.” He came, and the Butlers had him for a Shabbat meal.

Excerpted from SQUIRREL HILL: The Tree of Life Synagogue Shooting and the Soul of a Neighborhood by Mark Oppenheimer. Copyright © 2021 by Mark Oppenheimer. Excerpted by permission of Alfred A. Knopf, a division of Penguin Random House LLC. All rights reserved. No part of this excerpt may be reproduced or reprinted without permission in writing from the publisher.