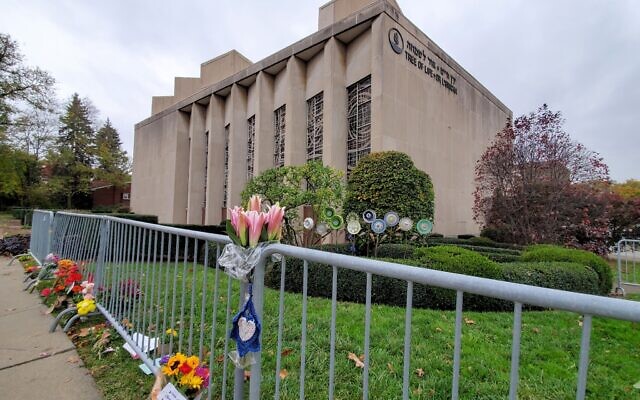 When Americans headed to the polls for the 2018 midterm elections, Jewish Federation of Greater Pittsburgh board chair Meryl Ainsman did not speak publicly about the political situation in the US.

But it wasn’t because she had nothing to say. Ten days earlier, a white supremacist armed with an A-15 semiautomatic burst into the Tree of Life synagogue in Pittsburgh and shot dead 11 worshipers. Moments before pulling the trigger, the assailant had posted a social media rant against immigrants going into America and singled out the Jewish refugee resettlement agency, HIAS, for its involvement.

“The rhetoric coming out of the White House at the time was also against immigrants,” Ainsman told The Times of Israel Monday, citing the caravan of asylum seekers US President Donald Trump claimed was barreling toward the US border from Central America. “I do believe that kind of rhetoric sparked something in the shooter.”

But in her capacity as head of a charitable organization, Ainsman was barred at the time from taking such a blatant political stance. Earlier this year though, she stepped down from her role at the Federation. And, just hours before polls opened for Tuesday’s US presidential election, Ainsman had no problem being even more blunt: “There’s no question that Trump’s rhetoric fuels anti-Semitism.”

The former Federation chair was one of nearly a dozen members of the Pittsburgh Jewish community who spoke to The Times of Israel about how they’re approaching an election that falls just days after the second anniversary of the Tree of Life attack.

Ainsman was among the more outspoken of them and had little problem tying how she felt about the communal tragedy to the way she planned to vote on Tuesday.

Others were more hesitant to make the connection and pointed out that their political views were established well before the shooting took place and were not changed as a result of it. What many did say though, was that by exercising their democratic right, the election gave them the opportunity to feel in control — a capacity that was stripped from them on the day of the shooting.

A ‘Democrat island’
Pittsburgh, and particularly its Squirrel Hill neighborhood where Tree of Life is located, leans heavily blue. Shooting survivor Audrey Glickman referred to the city along with Philadelphia as heavily populated “Democrat islands” among a sea of Republican red that covers the rest of Pennsylvania.

The state, with its 20 electoral votes, is seen as absolutely critical for both candidates to carry on Tuesday. Joe Biden narrowly leads Trump in Pennsylvania, according to the RealClearPolitics polls average showing him 4.3 percentage points up.

Glickman clarified that despite skewing heavily Democrat, Tree of Life is home to members from across the political spectrum “and we pride ourselves in our ability to get along with one another.”

Nonetheless, she said, many members were “incensed” by the decision by the synagogue’s Rabbi Jeffrey Myers to welcome Trump for a visit just two days after the shooting.

“He was doing it out of respect for the office of the president, but we were still burying people,” Glickman said.

She was even more blunt than Ainsman. “The shooter had the ideas of Donald Trump on his lips when he came in firing,” she said.

“There are those in our community who will overlook that. I’m not one of them,” Glickman added, explaining her decision to vote for Biden.

But when asked point blank whether she felt it was appropriate to tie the shooting to the election, Glickman retreated.

“Since I know people in the building during the shooting who would still vote for Donald Trump no matter what, I hesitate [to publicly speak out] because I’d rather keep my friends and stay unified rather than see us divided over who is president,” she said.

Ainsman similarly acknowledged the risk in politicizing the tragedy.

“The community has been extremely sensitive to the families of the victims,” she said, indicating that not all of them align politically. “I’d never want to say something that would cause them pain or that would lead them to think that what happened to their loved ones is being exploited.”

But it’s not just the victims’ families who might be offended by the politicization of the tragedy, but other community members as well.

Among them is Judah Samet, an 81-year-old Holocaust survivor who was four minutes late to services on the morning of the shooting and thus was still outside the building when the attack began.

He expressed his dismay over the opposition from many in his community to Trump paying a visit.

“He came to pay his respects. Since when is this a one-party country?” he said, flatly dismissing attempts to connect the shooter’s ideology to that of the president.

Voting with their feet
Others still in positions that bar them from endorsing a candidate were more measured in how they reflected on the near-coinciding of the shooting anniversary with this year’s election.

“As a 501(c)(3) we can’t endorse a particular candidate, but we can certainly talk about particular issues,” said Dor Hadash president Donna Coufal, referring to the organization’s charitable status. Her Reconstructionist congregation was one of three that shared the Tree of Life building that came under attack two years ago.

She highlighted gun control as a policy on which members of her congregation have become outspoken.

“We’ve also become more involved after the shooting in reaching out to refugees, which is a Jewish value,” Coufal added. “Those issues are relevant on election day.”

The Dor Hadash president stopped short of suggesting that the shooting itself will be on the minds of members when they head to the polls. “I wouldn’t say that the shooting changed the way we vote, but the impact of the shooting was that [we learned] the importance of using our voice and feet to make a difference in any way we could.”

“That was how we have wanted to honor Jerry Rabinowitz’s memory and the memories of the others lost,” she said, highlighting the Dor Hadash member who was gunned down in the attack.

She too warned against “politicizing” the shooting, while clarifying that the tragedy “reinforced [her] commitment to civic engagement.”

“I have always had a strong commitment to active participation in the democratic process and [the shooting] strengthened that commitment for me,” said Kalson who serves as CEO of the Squirrel Hill Health Center and chair of the Reform Movement’s Commission on Social Action.

“You feel very powerless when something like this happens in your community, but voting is the way we make our beliefs heard and express our voice most powerfully,” she said.

“We as Jews thrive when democracy thrives. That’s the lesson of history.” PJC

This article originally appeared in the Times of Israel, a publication affiliated with the Pittsburgh Jewish Chronicle.