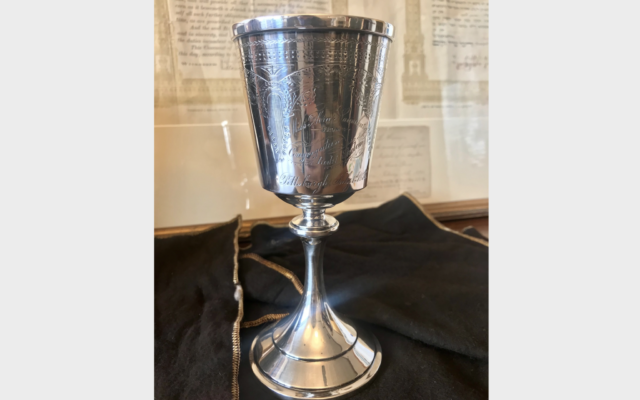 What does a conversation between a coin dealer and a retired chemical engineer in North Carolina have to do with a mid-19th century kiddush cup from Pittsburgh?

The story starts in Greensboro, North Carolina. There, a retired engineer, who is Jewish and works now in antiques, bought some metal from a coin dealer. Both knew the lot had a gem in it — a damaged sterling silver cup whose engravings indicated it was from Pittsburgh’s Rodef Shalom Congregation. The date on the cup: 1876.

“It was bent all to hell — it had a crease right across the engraving. That’s like someone having a sword cut across their face,” said the engineer, who spoke with the Chronicle on the condition that he remain anonymous. “I sent it to my silversmith and we made it better. I wanted to heal her up and get her home.”

Matthew Falcone, a Rodef Shalom board member, took the call from the engineer, who found Rodef Shalom’s office number online, about three weeks ago. The man told Falcone he didn’t feel right melting down religious items for scrap metal, and thought it was important to “repatriate” the item, Falcone said.

The box arrived shortly thereafter at Rodef Shalom with “about 1,000 stamps on it,” Falcone laughed.

When members of the congregation opened it, they were shocked: They found a seven-inch tall kiddush cup, commissioned by an area manufacturing company and gifted to Flora Naumburg, the daughter of the congregation’s second spiritual leader. They remain unsure if it was given to the younger Naumburg for her wedding or on the occasion of her leaving the congregation’s choir. She would have been about 22 in 1876, roughly the age of Rodef Shalom at that time.

Flora’s father, Louis Naumburg, started serving Rodef Shalom in 1865 as a “reverend;” though he was not ordained as a rabbi, he preached and led services, often entirely in German, Falcone said. Rodef Shalom opened its doors to congregants around 1855. 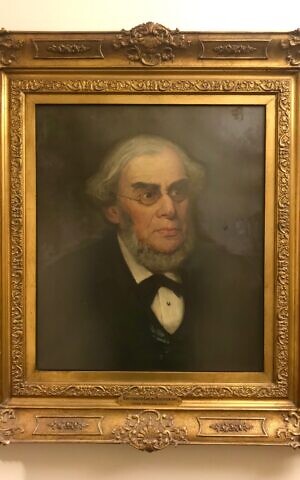 When he first saw the cup, Falcone was at a loss for words.

“It looks brand new — it’s gorgeous,” he told the Chronicle. “It is now one of the earliest artifacts we have, and the earliest one that belongs to the congregation. It just bowled us over. We were all incredibly touched.”

Falcone, a known history aficionado and ardent chronicler of the congregation’s past, said the repatriation of the cup — a pure act of tzedakah — meant a great deal to him, beyond even the historical value of the item.

“Mensches still exist in the world,” Falcone said. “It’s nice to find somebody with good and kindness in their heart.”

The engineer, however, remains modest about his part in the transaction.

“It was just something that needed to go home,” he told the Chronicle. “I consider this, as much as possible, an anonymous gift. The more anonymous, the better.” PJC