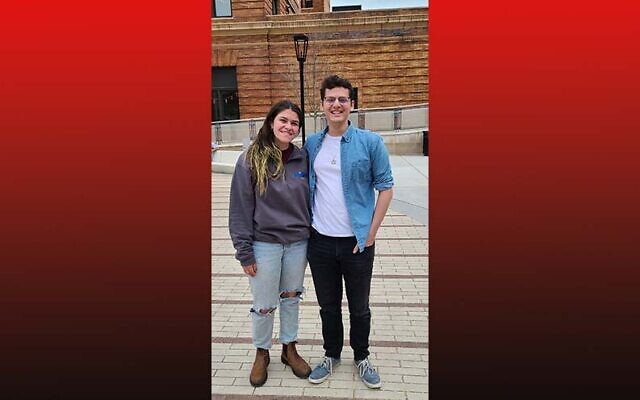 After Vasili Rukhadze, a visiting professor at the University of Pittsburgh, was accused of making remarks in February that compared wearing a face mask to being gassed in Auschwitz, Melanie Silver, president of Hillel JUC, wanted Jewish students on campus to know they had the full support of the school and its staff.

So, after learning of the incident, Silver, a junior majoring in digital narrative and interactive design with a certificate in Jewish studies, reached out to local Jewish communal professionals to see what could be done to help.

Hillel JUC Executive Director Dan Marcus, Jewish Federation of Greater Pittsburgh’s Community Relations Council Director Laura Cherner and Dylan Groff, CRC associate, told her the answer was to have something in place that would ensure “something like this would never happen again,” she said.

In response, Silver, partnering with Chabad on Campus President Ralphi Berlin, started a campaign to get the university to adopt the International Holocaust Remembrance Alliance’s working definition of antisemitism.

The two set up a meeting with Clyde Wilson Pickett, vice chancellor for diversity, equity and inclusion at Pitt.

Berlin, a junior studying finance business information, said he has been working for years to get the university and student government to do more to combat antisemitism. The IHRA is one of the only organizations with a working definition of antisemitism, he said, and it provides a framework of how to handle antisemitic incidents.

“Having the university accept the definition really empowers Jewish students to feel more comfortable on campus and to feel like it’s supporting them and our community,” Berlin said.

Published in 2016, the IHRA created the working definition to provide a guide to determine whether statements and actions qualify as antisemitic. It reads:

“Antisemitism is a certain perception of Jews, which may be expressed as hatred toward Jews. Rhetorical and physical manifestations of antisemitism are directed toward Jewish or non-Jewish individuals and/or their property, toward Jewish community institutions and religious facilities.”

In the last six years, more than 865 international organizations, governments, municipalities, NGOs, universities, athletic clubs, corporations and other groups have embraced the definition.

Hillel JUC’s Marcus said that it was because of student-driven leadership that the motion to adopt the definition passed at the university.

“We’re grateful to the student government and grateful to the senior administration of Pitt,” Marcus said. “This was something that Hillel JUC viewed as imperative for the benefit of Jewish student life.”

The Jewish student leaders exhibited determination and tenacity in their commitment to having the definition passed, Marcus said.

The university is committed to fostering an inclusive environment and welcomes collective investment from the school’s diverse community to help advance its work, Pickett said.

“The decision to add the IHRA definition to our website is a direct reflection of this commitment,” he added. “It came out of our discussions with student, faculty, staff and Jewish groups on campus and was an area of emphasis. It’s critical we continue to be as collaborative as possible while we advance our efforts to promote more equitable and inclusive experiences on campus.”

Silver said the announcement of the adoption of the IHRA definition was only recently added to the university’s website, and while there was no official announcement from the university, the student government board promoted it on Instagram and other social media platforms.

In a semester that started tainted by the remarks of a visiting professor, Silver said she feels the university recognizes the importance of the Jewish community. She said she recently attended a dinner at Pitt Chancellor Patrick Gallagher’s house and was seated next to Dean of Students Carla Panzella.

“She mentioned that she was in meetings where IHRA was discussed,” Silver said. “That made me feel seen.”

Berlin, too, said that although Jewish students may have felt supported by the university in the past, the acceptance of the IHRA’s working definition of antisemitism helps to show the Jewish community is an important part of the Pitt community.
“I think this was just the next step forward,” he said. PJC