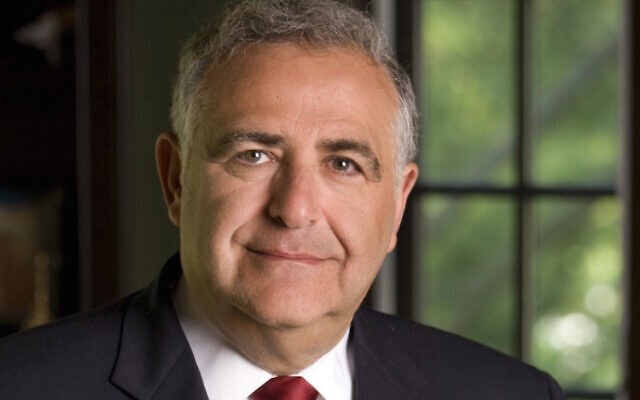 There are those whose light continues to shine. This week, we mark the passing of Rabbi Dr. Norman Lamm, president emeritus of Yeshiva University, at age 92, after a long illness and a splendid life.

Norman Lamm wrote of the Royal Reach. He refers to King David, who, in his Psalm 27, told God his only wish was to live in the House of the Lord. Indeed? David was presumptuous enough to aspire to sitting with the Lord? Talmudists argue the issue. David could have wished for triumph over his enemies, for conquest or glory. But he dared to transcend normative aspirations. For he displayed the Royal Reach, daring for greatness as befits a king.

Norman Lamm believed it was our challenge to reach high, to dream large dreams, to dare to dream, as we learned from David. Norman Lamm believed in the capacity of Jews and all people of good will to aspire to greatness in their lives. But not the greatness of wealth or power or fame; the true greatness of meaning and goodness. Norman Lamm taught us to aspire, but to aspire to a values-driven life, informed by Torah values. He believed that the Jewish story, our laws, sacred wisdom, sense of history and destiny, informed by Western values and knowledge, was the Royal Reach that could help us build a better world.

Rabbi Norman Lamm was a rabbi, scholar, educator and philosopher who invested his life in building and sustaining what we call Modern Orthodoxy. He helped fashion that critical segment of the Jewish community that aspired to a life of “Torah UMadda” synthesizing the splendor of Jewish thought and law with the wisdom of Western civilization — the arts and sciences — to fashion a life worth living in a world worth living in. He believed in the guidance of God, His divine discipline, in the future of a vibrant Jewish people and in the wonder of the State of Israel.

A brilliant scholar, captivating speaker and learned thinker, he authored 10 books, led synagogues in Massachusetts and New York, was a professor of philosophy and, for 27 years, served as president of Yeshiva University, until his retirement in 2002. Thousands of students, thousands of rabbis, educators, physicians, lawyers, businesspeople, social workers and psychologists prepared themselves for a values-driven life under his stewardship.

He was unafraid to engage in the intellectual issues of the past 60 years, the challenge of values in a post-modern world, the struggle to maintain a life of nuance and complexity at times of absolutes and correctness. He fought to position Modern Orthodoxy as an unafraid, Maimonidean philosophy that saw Torah as nuanced, timeless yet dynamic.

As president, he enhanced the faculty, built new schools and programs, elevated the discourse of Jewish community and Orthodoxy, and dealt with the myriad challenges of leading Yeshiva University. A private public man, he craved the safety and harmony of home and family. He was, first and foremost, a husband and soulmate of his beloved wife, Mindy, who succumbed to COVID-19 in April. They were a wondrous couple, warm and regal at the same time. They raised four wonderful, joyful, proud children and were blessed with grandchildren and great-grandchildren.

When I succeeded him as president in 2003, he offered me guidance, friendship, support, even intimacy. From the beginning, we would meet regularly. He told me he would give me any advice I asked for, on the condition that I would in no way feel bound to take his advice. Our meetings were wonderful sessions where he would privately share his views on Torah, on Jewish issues, on his hopes and fears. I could and did tell him anything, and trust him completely.

On my fifth anniversary, he wrote me a note, where, I believe, he revealed much of his heart:
“I am the only one who knows what you are going through in your quotidian activities: the aching feeling that you are not getting enough done, that worry that there is no time for all that has to get done, the spectre of potential failure; and, far more significantly, the joy of achievement and pleasure you have as more and more students are exposed to the teachings of YU.”

But I think his most profound impact will have been made by Norman Lamm the philosopher, who authored over 10 books, championed concepts of Torah Umadda, The Royal Reach and Faith and Doubt. Online (LammHeritage.org), over 800 of his sermons are digitized and categorized, and are contemporary life lessons. Dr. Lamm posited a Jewishness that is complex, not simple; textured, not flat; Technicolor, not black and white. In “Faith and Doubt,” he charged the Jewish people to be in conversation with the world:

“If we have nothing to say to the world, we must stop talking. If we have something important to say, even if we can only intuit it, and are unsure about how to formulate it, we must keep trying. Then, even if we do a great deal of stammering, we ultimately will articulate that which will again distinguish us as a ‘light unto the nations.’ For we have, then, a vital message for modern Jews and modern man.”

In a sense, he will continue to teach us, and all are better for it.

May his memory be for a blessing. pjc