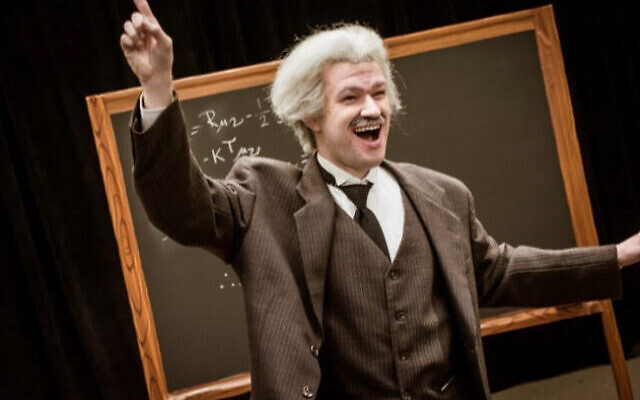 The producing artistic director of Pittsburgh’s Prime Stage Theatre company said COVID-19 completely has upended the way he, company staff and his actors think about American theater. And they’re not taking just any baby steps to tackle the mission of capturing their audience’s imagination.

“It’s just been really weird,” Brinda said. “So my staff and I sat down and said, ‘What can we do to keep theater alive?’ That’s really what it’s all about.”

Prime Stage’s solution? The launch of “Prime Online,” a series of three small or one-actor productions staged in front of intimate, CDC-appropriate audiences, and livestreamed to households worldwide.

The series kicks off at 8 p.m. this Friday, Nov. 13, with a livestreaming of “Einstein, A Stage Portrait,” written by Willard Simms and directed by Brinda. The one-man show takes audiences past the genius who developed the theory of relativity and into a deeply human portrayal of a man, a Jew and a thinker. A recorded link will be available for purchase through Nov. 20.

Simms “wanted to show the personal and deeply moral side of this great genius, humanizing him and bringing to life how his personal beliefs could sometimes get in the way of his scientific achievements,” the writer said in a prepared statement.

Prime Stage has been working for the past 12 years at New Hazlett Theater on Pittsburgh’s North Side. The new production will be staged at and recorded by Hearcorp in Carrick.

“Zoom fatigue is real,” Brinda said. “But this is kind of a mixture between film and theater — and it’s getting the best of both worlds.”

Brinda is proud of many of the particular details of the Pittsburgh production. He talked with Einstein’s great-grandson, as well as University of Pittsburgh physicists, when preparing to direct the text. An equation that appears on a school blackboard during one part of the production was, in fact, provided by a Pennsylvania-based physicist.

“Anybody who knows Einstein … knows this is legit,” Brinda said. “We wanted to make things as authentic and as real as possible.”

Actor Matt Henderson will portray Einstein in the production. Brinda said Henderson draws in the audience through a series of anecdotes that takes them from the life of a bored high school dropout to the winner of the Nobel Prize in Physics in 1921. Einstein’s idiosyncrasies and reluctance to accept celebrity, as played by Henderson, offer insight into his family life, politics and being Jewish, Brinda said.

Prime Stage strives to provide access to all, Brinda said, and this production will be available with options for audio description, American Sign Language and captions. Prime Stage Theatre has attained Certified Sensory Inclusive status through KultureCity, a nonprofit recognized nationwide for using its resources to help those with sensory needs.

The Prime Online series will continue Dec. 11 with a one-man adaptation of Charles Dickens’ “A Christmas Carol,” and in February with a production on the life of Sojourner Truth, Brinda said.