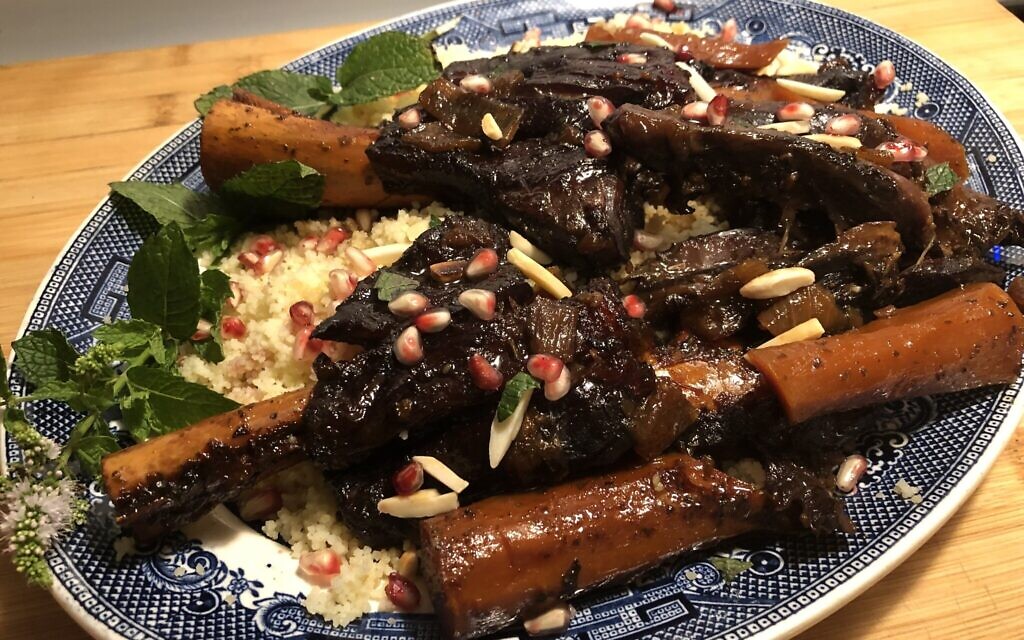 Aside from the seder of simanim, which is traditional to prepare for Rosh Hashanah, I also try to incorporate foods from the Seven Species, or Shivat Haminim: wheat, barley, grape, fig, pomegranate, olive (oil) and date (honey). This braised lamb recipe uses date syrup — or silan — which is what, historically, the Israelites called honey. (When we refer to Israel as the Land of Milk and Honey, it is date honey, not bee honey that is referenced.)

I also add pomegranate syrup — which is a reduction of pomegranate juice with no added sugar — into the marinade. Pomegranate syrup is readily available in kosher and Middle Eastern markets and online. The pomegranate mixed with silan gives a lovely sweet-and-sour flavor. Saffron, cumin, cinnamon and mint round out the fragrant marinade.

I suggest letting the lamb rest in the marinade for at least three hours. If you have the time and the refrigerator space, you can certainly allow it to sit overnight. I like meals like this for holidays because the meat does not dry out, so it’s easy to make ahead and warm just prior to the festive meal. I serve this over a plate of steamed couscous.

Pour over the lamb and refrigerate for a minimum of three hours. No need to make enough marinade to fully cover the meat; instead, turn the meat over several times so all of it has a chance to soak up the flavors. When braising, too much liquid can work against you and won’t reduce very well. The pomegranate syrup works as an acid and softens the meat, while the silan adds sweetness to the dish.

Set your oven to 300 F, and place a rack in the middle of the oven.

Chop the onion into large cubes, mince the garlic and peel and cut the carrots.

Heat the additional 3 tablespoons of oil over medium heat in a heavy-bottomed pot. I recommend a Dutch oven or enamel style pot with a lid for this recipe.

Add the onion, stirring occasionally and allow to soften for about 10 minutes before adding the garlic.

Stir continuously for 30 seconds — enough time to release the flavor of the garlic without burning it.

Using tongs, place the lamb shanks from the marinade and add to the pot to brown for 1-2 minutes on each side. If you’re using lamb cubes, add all of the meat at once, stirring it together with the onions to brown, turning over several times. If your pot is on the smaller side, you may have to brown the lamb shanks in 2 to 3 batches.

Add the carrots around the lamb before pouring the marinade over the meat. I use a rubber spatula to get every last pit out of the bowl.

Add ½ cup of water to the pot.

Cover and cook in the oven for 2 hours, until the meat is fork-tender and falling off the bone. If you’re using boneless lamb cubes, test the meat with a fork after about 1.5 hours.

Remove the cinnamon stick and allow to rest for 15 minutes, uncovered, before serving.

I arrange the meat over a platter of couscous before serving. Garnish with freshly mint leaves, pomegranate arils and toasted slivered almonds. Enjoy! PJC

Jessica Grann is a home chef living in Pittsburgh.