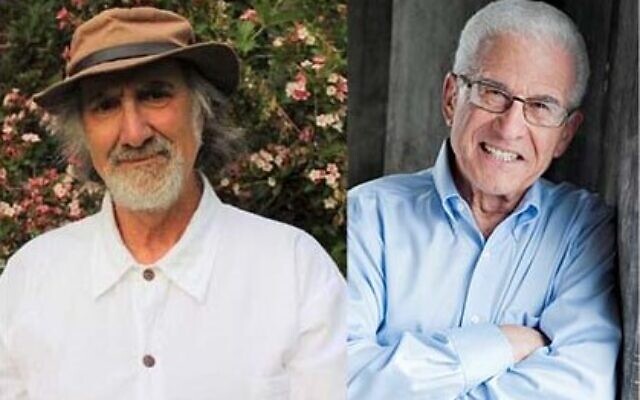 Phil Terman’s motto is that not everyone is a poet, but everyone has poetry in them.

Terman has published several works of poetry, including “The Torah Garden” and “Rabbis of the Air.” He has received the Anna Davidson Rosenberg Award for Poems on the Jewish Experience and the Kenneth Patchen Award.

Given Terman’s background and his life’s axiom, it’s no surprise that when interviewing his sister-in-law about her mother — a Holocaust survivor — he found verse in the narrative.

“I thought, I’m going to break this line; it feels powerful, I hear some music in there,” Terman recalled. “I wanted to capture her tone, and I started breaking the lines. I also used stanza breaks and pauses and italics for words she emphasized, trying to recreate her tone as much as I could on the page.”

Realizing that he had tapped into something more primal than other forms of writing, Terman began researching oral storytelling. He eventually realized that he was creating something between documentary and poetry.

Terman liked the format so much that he decided to continue to explore it, this time with the oral history of members of Congregation B’nai Abraham in Butler, where he is a member.

“Our synagogue has been around a long time, and it’s unique and very historic,” he said. “I think it’s the only one between Erie and Pittsburgh, and it’s kind of fading.”

Knowing that interviewing skills were crucial, Terman enlisted his friend and fellow congregant Larry Berg to help with the project.

Berg had a long career in radio, interviewing luminaries such as Elvis Presley and Paul McCartney.

“I’ve interviewed maybe 40,000 people in my career,” Berg said. “But when Phil came to me with his idea, I thought, ‘This is going to be really interesting.’”

Berg was intrigued by the idea of creating something more than an oral record that would simply read as a transcript.

The pair decided to test the new concept with Terman interviewing Berg.

“When he interviewed me as an experiment and showed me the results in poetry form, I thought this is a powerful literary form,” Berg said. “Somehow, the poetry emphasized everything and dramatized everything in a way I hadn’t seen before. It was my words, but to see it put in poetic form was really unique and different.”

In fact, the experiment worked so well it made Berg regret not having interviewed his grandfathers about their experiences living in England and Russia, or talking to his own father about growing up in New York’s Lower East Side.

Terman said that, like music, he wants his poetry to “sing,” as he has always been interested in creating lyrical narratives throughout his work.

“But also, I love to highlight and expose people who have interesting lives, stories and experiences to tell that people might be interested in but don’t otherwise get full attention,” he said.

Terman has written about a wide range of people, including prisoners and those working in homeless shelters. Everyone lives a poetic life, he said. But for now, he wants to shine a light on the poetry of Congregation B’nai Abraham.

“In this situation, I think there’s so much richness that doesn’t get shared or exposed to others, and we get to know them better and put them out there,” he said.

Berg said it’s important that the history of the synagogue is preserved, especially while there are still members who have been part of the congregation for decades.

“There are some people that can still remember 40 to 50 years ago,” he said. “We want to preserve that so that somebody, somewhere, will know that we were here. This place is still a vibrant Jewish community, even as small as it is, but somebody has to know about this in 10 or 15 or 20 years.”

Terman agreed, noting that the congregation has a depth and diversity that is important to document.

“It’s incredible to see how people came to Judaism, how they feel about Judaism, what it means to them and what the synagogue means to them,” he said.

The pair will spend the foreseeable future interviewing congregants and creating poetry from their words. After that, if there’s interest, they might take the show on the road and interview members of other small congregations.

In fact, Terman, who retired from teaching last year, would love to make this a new career, although the economics make it difficult for him to continue the work for free much longer.

He worked with his current publisher, Mammoth Books, to self-publish the poetry he created from his sister-in-law’s interview. He might follow a similar path with these interviews, he said.

In the meantime, Terman said he is attempting to capture the poetry in the stories of those interviewed and working to make sure the pieces he creates capture their voices.

At the end of the day, he said, this project shows that we all might be all communicating in verse.

Example of poem created from interview with Cantor Michal Gray-Schaffer

But it’s really living life to the fullness.
Being a good person in this life.

Not because you’re rewarded
in some future life,

but because—
it’s the right thing to do.

And you’re taking responsibility for yourself
and I think that’s the way I always was.

And that’s why Judaism and I are a good match,
as far as I’m concerned.