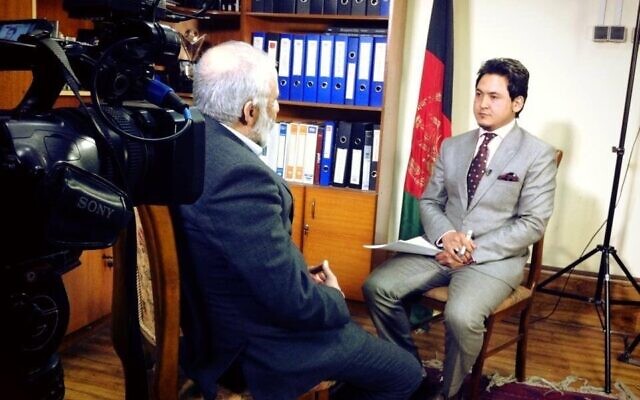 Misaq Mohammadi had a vision for the life of his family.

A former journalist, Mohammadi was working for the Afghan government at the administrative office of the president. Previous to that post, he served as the strategic communication adviser in the Ministry of Counter Narcotics. His wife, Zainab, a pharmacist, was working part time as a teacher after the birth of the couple’s children and leaving her job at the French Medical Institute for Children. Like Mohammadi, she had also worked as a television journalist. The two first met as coworkers at the same station.

But the family’s life changed on Aug. 15, 2021, when Kabul fell and the Taliban took control of the South Central Asian country.

“We lost our path. We lost our direction,” Mohammadi said. “We had goals, we had vision. We lost everything. We dropped from the sky to the land.”

‘Day and night had no meaning’
When the country’s capital fell, Mohammadi spent two days separated from his family and in hiding.

“It was very stressful,” he recalled. “I can’t even describe those moments. I was not able to sleep. Day and night had no meaning for me. It was a hard time.”

Mohammadi’s friend, a former deputy spokesman for the U.S. Embassy, reached out to check on his welfare. When Mohammadi told him that he was alone and didn’t feel safe, the American official told him to get his travel documents together, and he would try his best to get the family out of Afghanistan.

Mohammadi, along with his wife, son, daughter and two nephews, were evacuated, first to the United Arab Emirates and then to a military base in Virginia on Aug. 23, eight days after the Taliban took control of the country. The family eventually resettled in Pittsburgh. 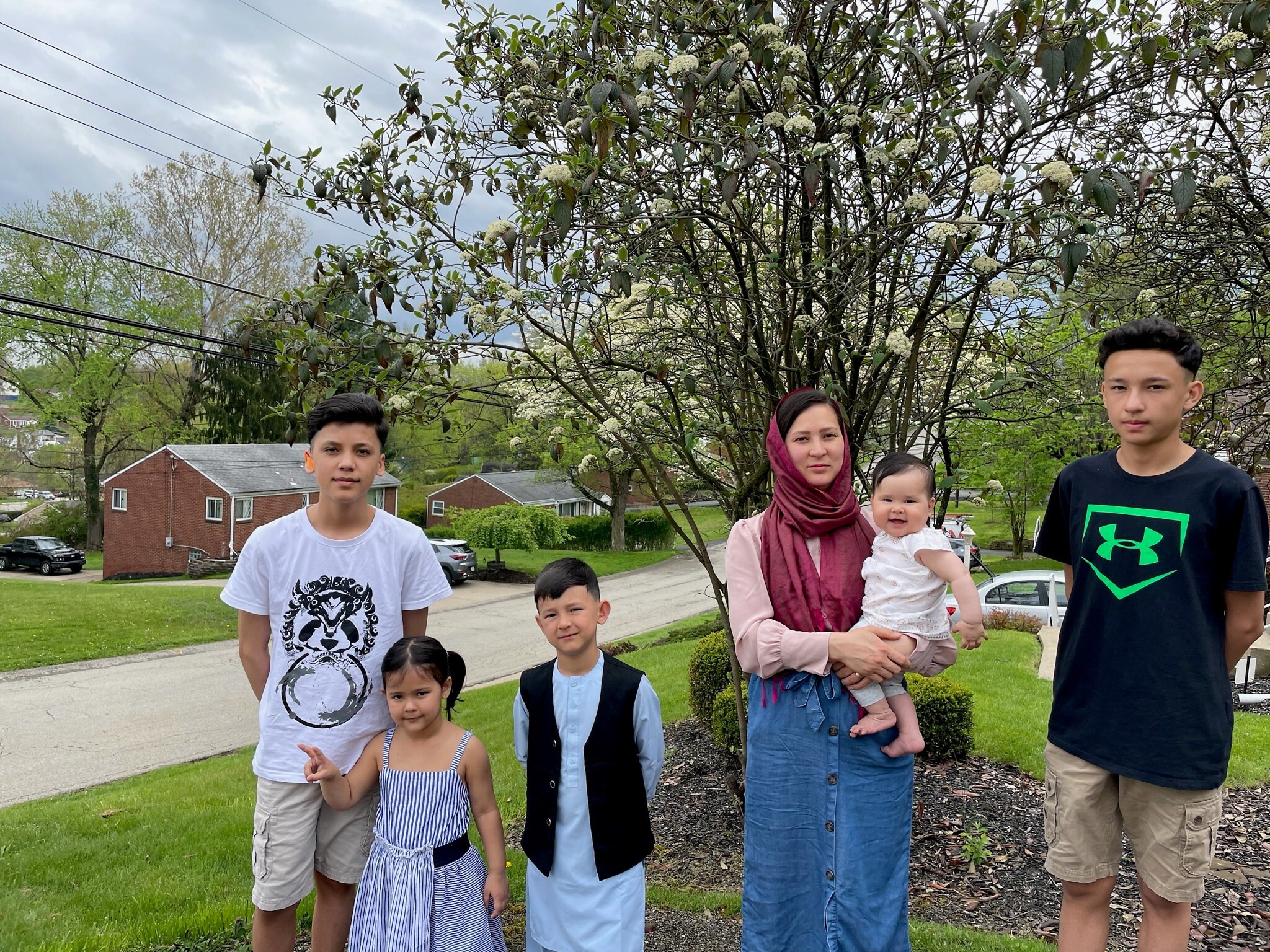 The former television journalist still has family in Afghanistan, including his siblings and parents. He said the Taliban has searched his former home twice since he left the country and investigated his father and brother. He considers his family in peril.

“Generally speaking, nobody is safe,” Mohammadi said. “Anything can happen at any time. There is no guarantee. It’s all fears.”

Living paycheck to paycheck
Mohammadi now works as a caseworker at Jewish Family and Community Services, the nonprofit that helped resettle his family.
Since coming to the States, Mohammad and his wife have had another daughter and have attempted to assimilate into American life. The family lives in a home in the South Hills, and the children started school along with their neighbors at the end of August.

Their son, Mohammad Mahdi, 7, is in second grade; daughter Hasti, 5, is in kindergarten. Both of Mohammadi’s nephews, Mohammad Elhman and Mohammad Arman, are in high school.

Mohammadi said his daughter is still getting used to life in a new country and a new school.

“Every day she gets back home, and she’s crying a little saying, ‘I’m not going to go tomorrow.’ But I think she’s adjusting,” he said.

Mohammadi, who studied at Waseda University in Tokyo and speaks fluent English, said the entire family can speak English. The children, he said, were quick studies, picking it up from cartoons on YouTube.

Still, the journey has not been without hardships.

In Afghanistan, Mohammadi said they had a good life and a solid income.

‘The catastrophic happened’
Asked if he could have predicted that Afghanistan’s government would disintegrate as quickly as it did, or that he would be forced to flee his home country, Mohammadi was emphatic in his shock.

“Nobody expected it, nobody wanted it and nobody will forget it,” he said. ”Especially for my generation, we expended all of our energy and our life into the fight against the Taliban.”

“Then the catastrophic happened,” he said.

The refugee pointed to the Trump administration’s peace agreement with the Taliban as the beginning of his country’s downfall. Before the former president’s deal, Mohammadi said, the Taliban was seen as an international terrorist group.

He believes the agreement gave the Taliban legitimacy. It also confused many in his country.

“Yesterday, they were terrorists. Today, you’re sitting behind the negotiation table with them?”

Once the deal was signed, Mohammadi said, the morale of the Afghan troops was deflated, and the narrative changed.

Betrayal and lies
Despite filling the vacuum left after the United States ceded power and evacuated its military, Mohammadi does not believe the Taliban can remain in power.

“They don’t have the capacity to rule the country,” he said. “They are a terrorist group. They just know how to tell people what to do. They have power and are controlling the country, but we don’t have a government in Afghanistan. It’s just a military group who captured power by force.”

The Taliban, Mohammadi said, betrayed and lied to the United States. He pointed to the Taliban’s human rights record. Women, he said, are no longer permitted to attend school or participate economically or politically.

“Do you know how hard it is to live in Afghanistan now?” he asked. “People are dying every day. People are selling their children just to get some bread. This is the real situation under the Taliban. I have friends that have master’s degrees that are now selling potatoes by the road.”

Responsibility
Mohammadi said his family is happy to be in the United States and that the people in Pittsburgh have been very friendly. He enjoys his job with JFCS. And, despite living paycheck to paycheck, he is optimistic about the future.

“I think I have the necessary skills and knowledge,” he said. “I’m even more optimistic for Zainab because she’s a pharmacist and she speaks English. She will be able to get a good job.”

Despite his optimism for a future life here in the States, Mohammadi believes he has a responsibility to help rebuild Afghanistan after the Taliban’s rule has ended and to ensure the next democratic government will last.

“I don’t want this to happen for my children,” he said. “It was a failure. I see myself responsible for the people of Afghanistan. Unfortunately, there have been more than four decades of war. I also experienced the collapse and was forced to flee the country. I’m afraid it will happen again.”

One eye laughing…
Mohammadi’s current position has left him with mixed emotions.

“It’s like I have one eye laughing and the other is crying,” he said. “I get emotional. I’m crying for my generation. They were raised with democracy and human rights and dignity. They were working and fighting for human rights and overnight … suddenly, overnight, the page was turned to darkness.

“I’m happy here,” he continued. “I’m grateful to the United States’ people for how welcoming they are to the 75,000 Afghans that entered country … They have a home, a job, food. Their children are going to school here. So, I thank the United States. But Afghan women are not allowed to go to school or work [in Afghanistan]. People should raise their voice. We all have a responsibility.” PJC