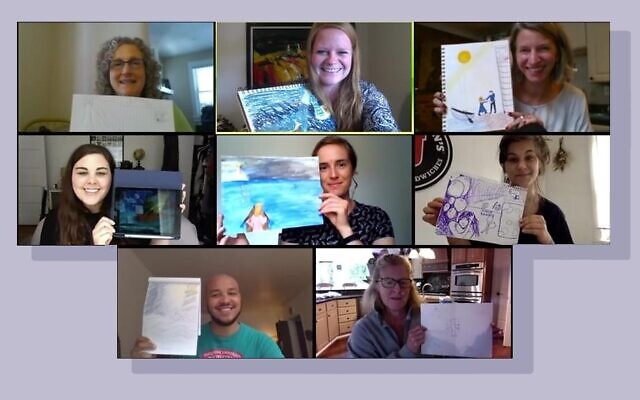 Deep into the pandemic, mental health professionals continue to help their clients battle depression and anxiety, cope with the stress of job loss and financial worries and deal with other, more serious conditions exacerbated by the virus — all while trying to manage their own mental health and find work-life balance in an environment that completely changed 10 months ago.

“Life changed pretty significantly the day we were told to go home and stay there for an indefinite period of time,” said art therapist Angelica Joy Miskanin. “I’m a therapist who is also a parent. So, what changed was not only starting to do virtual sessions and work from home but also be there for my 5-year-old who was home with me.”

Her situation, she said, reflects that of many therapists who now must perform a juggling act, working from home while ensuring patient confidentiality and still being attentive as a parent.

Miskanin, who works with Jewish Family and Community Services, feels lucky, she said, because, although her sessions are now virtual, she had preexisting relationships with most of her clients. Establishing relationships with new clients through telehealth sessions is not her preference, but now is part of the job.

“I wouldn’t say it’s been a barrier being on-screen, but it doesn’t allow me to provide materials for my client or help facilitate whatever it is we would be working on in a session,” she said.

Private therapist Neal Holmes has adapted some of his procedures to fit therapy sessions now conducted on Zoom or through a telephone call.

“I never thought, at this stage in my career, that I would take notes on voice inflection, tone, intonation, the way a person makes a pause on the phone or the way a person expresses themselves on video or with their body movements,” Holmes said. “I have to be more astute to those nonverbal clues.”

There has been a marked increase in mental health needs since the beginning of the pandemic, he said.

“There’s definitely been a twofold increase,” he said. “It’s so intense that I now have a waitlist. Anxiety symptoms are increasing, depression, OCD are increasing. The reason they’re increasing is because, as human beings, we’re social creatures, we’re a social species. And we don’t have that opportunity to connect with people the way that we used to connect.”

Daily schedules have been disrupted for many therapists working to manage their personal responsibilities while accommodating their clients.

“I do see a lot of clients later in the evening than I did when I was in person,” Miskanin said. “That doesn’t necessarily mean I start my day later. It’s demanded even more flexibility in terms of schedule. I really strive to maintain some set of boundaries around when I’m working and when I’m not, but it’s difficult being at home when those lines are blurred all the time.”

Holmes also recognizes the need to create a separation between work and home life.

“At the end of the day, it’s important to me that I put away that computer, that I close it down and move myself out of that space into a different space,” he said. “It’s the sense of placement that’s really important.

“My husband knows after I finish a session to give me like an hour to chat about casual, superficial stuff,” he continued. “At that point in time, I don’t want to talk about anything that’s serious.”

Mental health professionals have had to constantly pivot since the pandemic began, said Maggie Feinstein, director of the 10.27 Healing Partnership.

In addition to the 50 minutes a therapist usually spends with a client, there is time that goes into preparing for a session, she said. Pre-pandemic, that meant reviewing charts and meeting notes from previous sessions. Now, in addition to those tasks, a therapist often has to accomplish other things as well, like preparing meals for children who are at home.

“That’s an extra level of challenge,” Feinstein said. “One of the important parts is, how can we help people feel safe? This is a brand-new challenge for the professionals in their own life space, head space, so they can feel that safety and really be present in the session.”

The need for mental health help, Feinstein said, is now greater than the current system was built to handle. Still, “one of the inspiring things is, we’re seeing crop up some very innovative, creative thoughts,” she said. “We don’t have to do things the way we’ve always done them. We can adapt and change.”

The virus has added another layer of challenge onto a profession that already required creativity, presence and focus, Miskanin said. She has found the need to set boundaries that allow her the freedom to recharge.

“I really do try and keep the weekends for myself,” she said. “It gets fuzzy, though, and sometimes it’s tricky. It’s not quite as cut and dry as leaving the office and heading home.”

She has found a path that helps her maintain balance.

“I continue to see my own therapist,” she said. “I’m very open about that. My nuclear family and staying very steady with my care and attention to them has been a priority. I return to that as a source of strength and hope and focus.” PJC