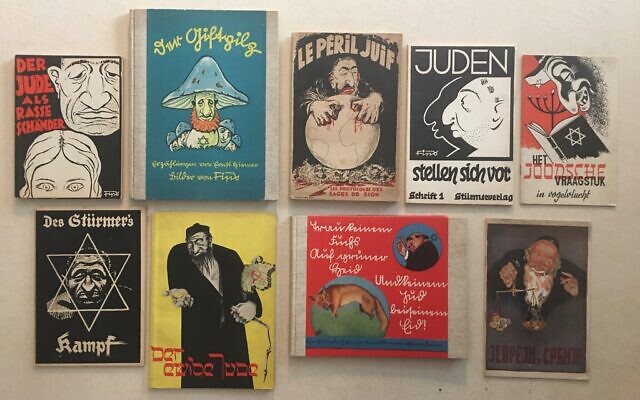 It started with a tattoo.

“I knew very little about the Holocaust,” Howard Cohen recalled. “I grew up in Beaver Falls and it was never discussed. It wasn’t even discussed in my history class. I remember coming home in fourth grade and telling my mother my teacher had a neat tattoo on her arm with a bunch of numbers.”

Cohen remembered his mother pulling him aside and telling him, “‘Now listen, don’t say anything about that. I want you to forget what you saw. Do not mention it to her or anyone else.’ She forbade me to discuss it with anyone.”

Several years later, Cohen was at a drugstore and spied the book “A Pictorial History of the Third Reich.”

“I saw all these people, all these dead people and it mentioned that they were killing Jews. That was my first understanding of it. I remember thinking, ‘My God, these people were all killed.’ I bought the book and still have it,” he said. 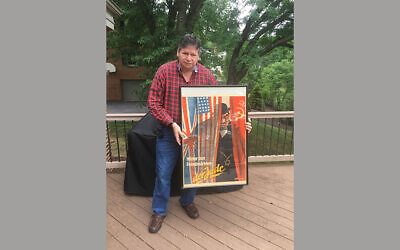 Since that first purchase, the Upper St. Clair resident has become something of an anomaly, a Jew who collects Holocaust-related artifacts.

“I would say the vast majority of people don’t understand why I would want to collect something so morbid,” Cohen offered. “It is part of our history and it can’t be forgotten.”

The 68-year-old understands the importance of not letting these artifacts be lost to history despite not having any immediate family murdered in the Shoah.

“My family came over at the turn of the century,” he said. “My wife’s family, her father was the only survivor. Her mother was American. At our wedding I met her entire family. It was unbelievably small. I had 100 people; her side, I think there were eight and none from her father’s side. It was a shock to me then.”

Cohen and his wife, Luisa, collected antiques. Decades ago, he saw an ad in the back of an antiques magazine selling concentration camp letters. That was the start of his private collection of Holocaust-era artifacts. 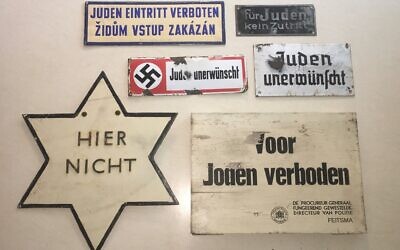 “I found it interesting,” Cohen said. “I didn’t know there was such a thing. I ended up buying 10 letters, primarily to the same family. That was the first thing I got. Everything evolved from there.”

Cohen’s collection has grown over the last 30 years to include anti-Semitic books used to teach German children, “Jews Unwanted” signs, posters, a passport with a stamped “J,” a striped concentration camp uniform and many more disturbing items from the Holocaust.

“The stuff Howard and I have, it’s not for the faint of heart,” explained Cohen’s friend, Michael Caplan, who also is a private collector of Holocaust-era memorabilia. “Some of the pieces Howard and I have are pretty evil.”

Caplan got into collecting these items “as a hobby,” he said. “I actually stumbled into it. After my mother passed away, I started doing the family tree and found out that I had relatives who died at Auschwitz.”

Caplan, who lives in Columbus, Ohio, said the real catalyst for his collection was seeing “The Eternal Jew,” a 1940 Nazi propaganda film, on YouTube.

“I couldn’t believe the bologna I just watched,” Caplan said. “After I saw it, I decided to do some research and bought a book that came with an anti-Semitic postcard. From there, it spiraled out of control.”

Caplan ventures that the majority of Holocaust-era private collectors are Jewish.

“Very rarely would you come across a neo-Nazi that could pay what Howard and I pay for some of these pieces,” he said. 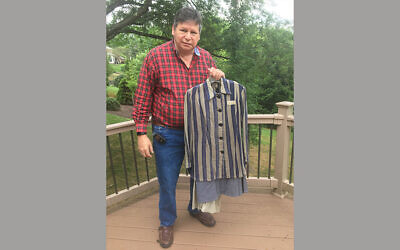 It is important that Holocaust items are preserved, explained Lauren Bairnsfather, director of Pittsburgh’s Holocaust Center, whether they are in a private collection or kept at a museum.

“We want artifacts from the Holocaust to be collected by people who appreciate the artifacts and will take good care of them, which doesn’t preclude a private collector from having even a large collection of artifacts and documents,” she said.

The Holocaust Center of Pittsburgh is not actively seeking out pieces to add to its collection, Bairnsfather said. In fact, when she is approached with something of historical significance, she refers the owners to the Holocaust Memorial Museum in Washington, D.C. Pittsburgh’s Holocaust Center’s role, she explained, is not only to display the artifacts it already has on hand, but to educate the public.

Thanks to a local Holocaust survivor, Cohen also has used his collection for educational purposes.

“I was an optometrist for many years,” Cohen said. “A man came in to get his glasses fixed and an optician said, ‘Hey, there’s a man over there with numbers tattooed on his arm.’”

Cohen struck up a conversation with the patient when he came to pick up his glasses. “That started a long relationship. I lectured with him,” he said.

Cohen remembered seeing a story in a local newspaper that quoted a teacher lamenting the fact a Pittsburgh-area high school did not teach the Holocaust and that its senior class president was insisting “it was an embellishment by the Jewish people. That really disturbed me.”

The collector reached out to that teacher, offering his artifacts. The teacher felt, however, it would be more impactful if Cohen personally spoke to her class.

Cohen did come to the school and brought his Holocaust survivor friend, who recounted his story. Although it took some time for the students to get warmed up “by the time the bell rang, and they were to go to another class, nobody wanted to leave,” Cohen said.

Cohen believes the artifacts in his collection should be preserved because of their educational value and their ability to reach into a time many would rather forget.

“When I think of what they stood for and how the people had to live – they had to live as rats,” he said. “They had to go out at night and try and find food. Everyone was against them.”

When asked about the current wave of anti-Semitism, Cohen recalled a refrain of his survivor friend: “ ‘Everyone hates the Jew.’ It’s hard to understand. Uneducated people still think that. If you want to hate the Jew, you’re going to find a reason to do that. You can find a reason to hate people whenever you want.”

For Bairnsfather, preserving artifacts and memories are vital to ensuring the Holocaust is never repeated.

“These are artifacts of what happened and without them it’s harder to show what happened,” she said. “We’re losing survivors every day. Without survivors, we’ve lost witnesses. Thank goodness we’ve recorded their stories. These are the artifacts we need to show this happened. I’m grateful to anyone that keeps them safe.” PJC