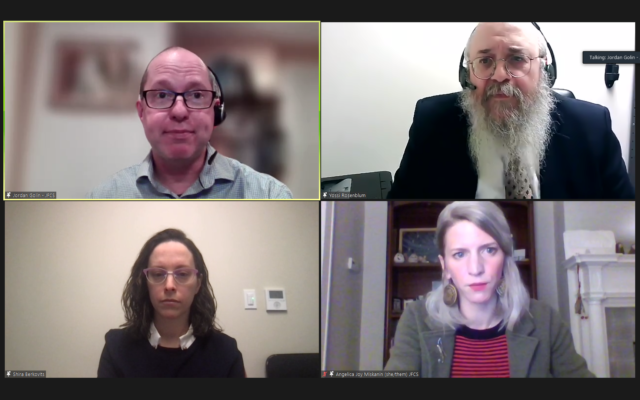 Panelists speak during the webinar. Screenshot by Adam Reinherz

Education, intervention and communication are essential in the effort to safeguard children from abuse, according to area professionals who shared their expertise during a March 27 webinar for Pittsburgh clinicians, educators and parents hosted by JFCS.

Panelists leading the hour-long discussion included Jordan Golin, president and CEO of JFCS; Shira Berkovits, president and CEO of Sacred Spaces, a Pittsburgh-based nonprofit that partners with Jewish institutions to prevent and respond to sexual abuse and other abuses of power; Rabbi Yossi Rosenblum, head of schools at Yeshiva Schools of Pittsburgh; and Angelica Joy Miskanin, a JFCS psychotherapist.

“We all have a role to play in preventing and responding to abuse,” Golin said.

For community members, that means taking three steps, according to Berkovits The first step is “to educate yourself,” she said. “Learn to recognize early indicators of abuse because you might be the only one who notices.”

The second step, she said, “is to understand and practice speaking up and intervening.”

Finally, the third step is “to support our youth-serving organizations in the community by putting in place really robust systems to prevent and respond well to abuse if it occurs.”

As important as it is to establish communal safeguards, prevention and response also must include speaking with children, Golin said.

When communicating with youth, it’s vital to steer the conversation away from “good touch and bad touch,” Berkovits said. Instead, provide clear rules, such as “the private parts of your body that are covered by a bathing suit should not be touched or shown to others, except for health reasons or if you need help getting clean.”

Additionally, when speaking with children, use “anatomically correct terms in referring to body parts,” Berkovits said. It’s also critical to let children know that they are “in charge of the physical affection that they receive.”

Teaching affirmative consent from an early age will help children understand that they have autonomy over their bodies throughout their lives, she added.

Something else to keep in mind, Berkovits said, is that secrets between adults and children should never be allowed.

“This should be a really important message at school, at camps, in shuls as well — nobody should be saying to the child, ‘I have a secret to tell you,’” Berkovits noted.

There is a difference between secrecy and privacy, and that’s something to be addressed when a child ages, but nobody should be trying to isolate a child from their family, she said.

If a child discloses that abuse has occurred, parents should remember to “first and foremost” remain calm, Miskanin said.

“It's very common and valid for parents to experience a range of emotions that can include feeling shocked, angry, betrayed … even doubtfulness,” she said. “But please, I would really urge parents to try to remember it's important to stay calm and to listen to what the child is telling you. Believe the child, reassure the child that they will not be in trouble for telling.”

Adults should make sure the child knows that the abuse is not their fault, and reassure the child that everything will be done to “protect them from further harm,” Miskanin said.

She encouraged parents to report any abuse to ChildLine, a 24-7 resource from the Pennsylvania Department of Human Services. When a call is made or an online report is entered into ChildLine, the system tries to differentiate between abuse and neglect, said Rebecca Remson, director of development and communications for JFCS, following the program.

“What we may think is abuse may actually be categorized as neglect,” she said. “Both are followed up with, but who handles the complaint and the timeline of response depends on the category.”

Ultimately, if someone learns of or suspects abuse, “contact Childline immediately at 1-800-932-0313. An investigation will open within 24 hours,” Remson stressed.

Rosenblum praised JFCS for organizing the March 27 webinar and described child safety within the framework of Jewish law.

There is a “mitzvah” to protect and safeguard children from abuse, but unfortunately, some people mistakenly think that reporting abuse may violate the prohibition against lashon hara (making derogatory statements), he said.

“Lashon hara is when you're just speaking negatively about someone for no purpose,” Rosenblum said. “When the purpose is to save and to help a vulnerable child from, God forbid, being abused, then all that goes out the window. The mitzvah becomes to publicize it as much as possible and to ensure the safety of the community and the child.”

Rosenblum told panelists and the 70 households participating in the webinar that he remembers attending a lecture almost 40 years ago by the late Rabbi Dr. Abraham Twerski, a University of Pittsburgh-trained psychiatrist, author and founder of Gateway Rehab.

At the time, Twerski was “a lone voice” on topics of abuse, Rosenblum said. “Fast forward 35-40 years later, we know so much more.”

Despite the progress made in recent decades, “one of the conclusions of tonight is that we just need to keep at it,” Rosenblum said. “We haven't solved all the problems just yet.”