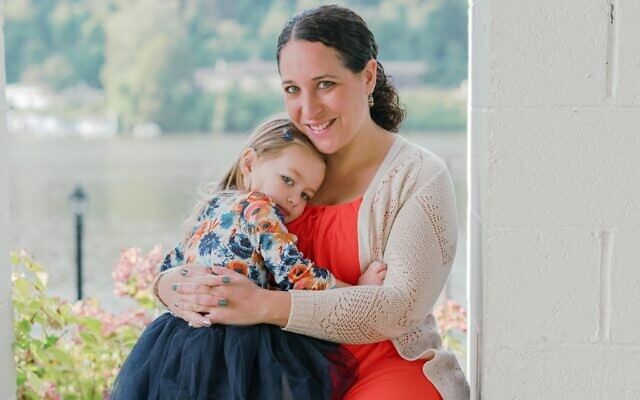 Erika Schmitt was seeking to grow a family of her own.

“I always wanted to be a mom. Life circumstances happened to be that as I got older, my path didn’t go that way,” said Schmitt, who grew up in Monroeville attending services at Temple David. “As I hit my late 30s, I said, ‘I really want to be a mom, even though I’m not in a relationship.’ I realized this is a path I wanted to take.”

Schmitt’s path arrived at inner uterine insemination, or IUI, at an Allegheny Health Network fertility clinic. It took a few tries, and about six months, before she became pregnant. On Oct. 7, 2018, her daughter, Hadley, was born at West Penn Hospital in Bloomfield.

Today, Schmitt is helping Jewish women like herself with fertility issues, through an organization she found on a Facebook parenting group.

The Jewish Fertility Foundation (JFF), a nonprofit started in 2016 in Atlanta, announced it will open a Pittsburgh chapter, thanks to a multiyear grant from the Jewish Federation of Greater Pittsburgh. Pittsburgh will be JFF’s fifth location in the U.S., following an expansion trend kicked off by a 2019 pilot program in Cincinnati. Schmitt serves on the foundation’s Pittsburgh advisory board.

The JFF’s mission is to provide financial assistance, emotional support and educational programming to Jewish individuals with medical infertility. To date, it has distributed 125 fertility grants, and 91 babies were born under its purview; total grants, loans and clinic discounts have exceeded $1 million, officials said.

Pittsburgh’s Federation granted $30,000 to JFF for 2022-2023 and committed to funding the group for three years at this level, as long as it meets reporting goals and adheres to the grant agreement.

“One of the benefits of Jewish Federation’s strong Community Foundation is the innovation our endowments enable,” Federation CEO Jeff Finkelstein said. “The Jewish Fertility Foundation is an excellent example of fostering this innovation, providing equitable access to fertility treatment, something that can be out of reach for too many in our community.”

Elana Frank is JFF’s founder and CEO. She, too, has a fertility story.

Frank made aliyah to Israel about 13 years ago and, while there, socialized medicine picked up the tab for her IVF treatments, which, in some places, top $20,000. She had two boys there, now ages 11 and 9.

In 2015, after leaving Israel for Atlanta and having a third child, Frank had a conversation with two female friends in a Jewish Community Center pool about the cost of having their babies.

“I was shocked,” she said. “My friends didn’t have the Jewish community behind them when they were going through this.”

Shortly afterward, Frank launched JFF as “a community-focused organization” for Jews struggling with infertility issues. In cities where they are rooted, they build relationships with local Jewish federations and organizations that help with financial shortfalls like Hebrew Free Loan associations.

In Pittsburgh, JFF will not have a physical location; instead, a staff person and team of volunteers — they are in the process of evaluating applications and seeking volunteers — will work within the Jewish community. In some cities, a JFF staffer is based, physically, at the local Federation offices.

Schmitt, a single parent by choice, is familiar with fertility issues. By day, she serves as the director of adoption and permanency at The Children’s Home of Pittsburgh, a Lemieux Family Center in Garfield. Her daughter Hadley is now 3½ years old.

“The reason I’m willing to share my story and put it out there is I think it’s important fertility is talked about,” Schmitt said. “I think talking about it is important, as is the Jewish connection, to raise a Jewish child to be part of the Jewish community.”

“I feel really strongly about the support [JFF] offers,” she added. “Infertility is a hard process; it’s very emotionally taxing. For me, that really drove me into wanting to have the organization here, wanting some of these women not to be alone.”