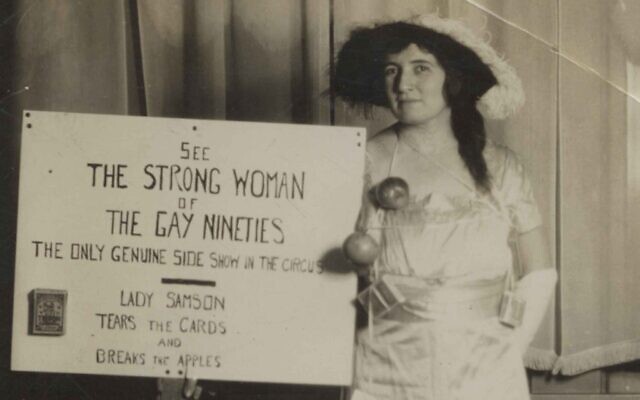 Gertrude Kingsbacher Sunstein was an athlete, an educator and a suffragette. (Photo courtesy of Rauh Jewish Archives)

A selection of documents from the life of Gertrude Kingsbacher Sunstein, on a theme:

“Songs of Revelry” was a booklet of lyrics compiled by family and friends in 1910, on the occasion of Gertrude Kingsbacher’s marriage to Elias Sunstein. Throughout the 20th century, it was common practice at social events, especially Jewish social events, to write inside-joke lyrics to popular melodies. The first song in the booklet is “The Pair,” to the tune of “E-Yip-I Addy-I Ay.” It recounts the couple’s romance. The first lines are, “Our Gertrude to Bryn Mawr/ Did go and was by far/ The strongest girl there of the crowd.”

Almost 70 years before Title IX, Sunstein was a student athlete. She led the women’s basketball team at Rodef Shalom. At Bryn Mawr, she was captain of the basketball team and a member of its field hockey and track teams. She must have also played tennis there, because we have a photograph showing her standing midcourt, pretending to serve.

A few years later, in 1914, before the wedding of her sister Florence Kingsbacher and local boy William Frank, friends and family created a fake program for an imaginary play called “Joys in Babeland,” about the soon-to-be-married couple. The program is filled with make-believe advertisements, public service announcements and upcoming attractions, each crammed with inside jokes about the couple and their social circle.

Among those gags is a list of books published by the imaginary Straus Publication Society. Each title is a dig on someone in the group, including “The Iron Woman,” attributed to Sunstein. There was an actual novel by that name, published in installments in Harper’s Weekly in 1910 and 1911 and later as a bestselling hardcover. It tells the story of a widow who owns and operates an iron mill in a fictionalized Pittsburgh.

Sunstein was not an industrialist, but she was enthusiastic about equality. Elsewhere in the program is an advertisement purportedly placed by her, although more likely it was playfully placed at her expense by whoever made the book. “Votes for Women!” it demands, and then it goes on to explain: “Men who support our cause are not necessarily henpecked. Not even if they march in the suffrage parades. FOR EXAMPLE—MY HUSBAND.” It is signed “Gertrude Sunstein, Publicity Manager, Equal Franchise League,” a local branch of the national campaign to get the vote for American women.

Seven years after helping women get that vote, Sunstein attended the “Harvey Circus,” the theme of Harvey Strassburger’s 50th birthday party at the Concordia Club. As the Jewish Criterion described it, a few days later, “The interior of the club was arranged to represent a mammoth circus. Large posters in the main hall, depicting the many thrills and attractions in the ball room above, which had been converted into a regular circus ground, with sawdust, huge canvas tent, rows of circus seats, side show, band wagon, ballyhoo, vendors of peanuts, pink lemonade, etc., in fact everything of the flare and glamor of a real circus. The ceiling and chandeliers of the ball room were festooned with myriads of colored balloons, which presented a very delightful and colorful effect.”

It sounds to me like a cross-generational dig, similar to “OK Boomer” today. The “gay nineties” were an invention of the 1920s. In their nostalgic yearning for the 1890s, people were shaving the rough edges off the recent past and condemning the confusing present.

The only other surviving photograph from the Harvey Circus shows Harvey’s mother, Julia Strassburger, born 1854. In the gay nineties, she would have been about the age Sunstein was that evening in 1927. She is standing in the same spot as Sunstein, but she wears no costume and carries no sign, preferring dark clothing and a dour expression. PJC