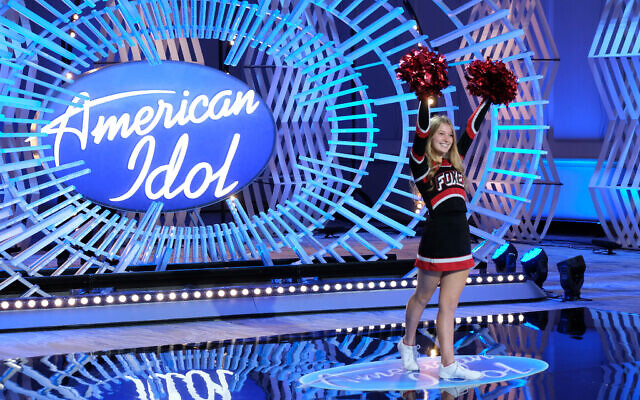 Ascending Pittsburgh singer-songwriter Sloane Simon had other things on her mind when she joined a Zoom call in September to perform for “American Idol” producers.

“I had just joined my school’s cheer squad and I almost didn’t do ‘American Idol,’” admitted Simon, 16. “My audition for the producers was minutes before the first home game of the season, and I had to rush out of the house straight to the game. I was afraid I wouldn’t make it.”

Spoiler alert: She not only made the game, but she aced her audition.

Soon after the Zoom call, Simon, a Jewish Fox Chapel Area High School sophomore, flew to San Diego, California, to perform in front of the show’s familiar celebrity judges; the verdict on whether she gets a “golden ticket” and a pass to Hollywood Week will air on Sunday, March 14, on ABC.

And, yes, she does appear in her Fox Chapel cheer gear in promotional photos for Sunday’s show.

“[Auditioning] was exhilarating and terrifying at the same time,” said Simon, who performed an original composition called “Laurel Canyon” along with singer-songwriter Melanie’s staple “Brand New Key.” “I was hyped up … but I have never been more nervous.”

Simon picked up the guitar around age 9 and, by 13, was performing solo sets at Hollywood’s Viper Room and, closer to home, at the Dollar Bank Three Rivers Arts Festival. Sarah Aziz, the Pittsburgh festival’s director, was captivated back then by Simon’s “mature voice” and her professionalism.

“When I heard Sloane, I didn’t know her age,” Aziz told the Chronicle in 2018. “I just heard her and said, ‘Let’s put her on the acoustic stage.’ Then she filled out her bio, and my marketing director called me and said, ‘Did you know you programmed a 13-year-old?’”

The first original song Simon penned was “365,” a tribute to her mother, Robin, who was battling cancer. Simon’s mother not only beat the cancer, she flew to San Diego to support the younger Simon for the “American Idol” auditions.

Simon’s publicist said Simon had no idea how many people were auditioning for the “golden ticket” this season — COVID-19 kept everyone socially distanced and in separate rooms.

“The scariest part was the flight,” she added, laughing.

Simon is sly about details for her upcoming debut EP, saying only, “I have a few songs but I’m not spilling anything.”

She’s excited to talk, though, about the experience of auditioning on an international hit music show.

“It was just an amazing experience to be included,” she told the Chronicle. “It was a fantastic college essay.” PJC