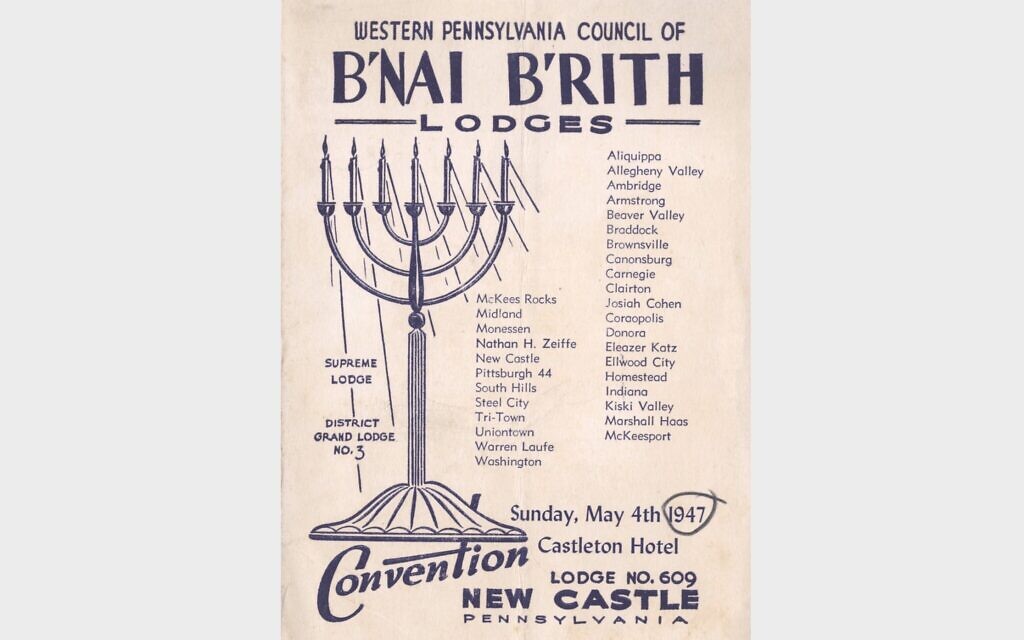 B’nai B’rith began in 1843. By the end of the decade, it had enough lodges in enough places to justify a hierarchy. It created two “District Grand Lodges.” No. 1 in New York covered eastern lodges, and No. 2 in Cincinnati covered western ones.

Pittsburgh sat between them. Its nascent, fractured Jewish community had about 35 people, not counting peddlers and small-town merchants. Its one tiny congregation was splitting in half, and its cemetery stayed stubbornly independent of the congregation.

District Grand Lodge No. 3 was established in Philadelphia in 1856. It came to encompass four states with not much in common aside from occupying the miles between New York and Cincinnati: Delaware, New Jersey, Pennsylvania and West Virginia.

Western Pennsylvania and West Virginia added little until 1862, when Jericho Lodge No. 44 was established in Pittsburgh. The locations of the 43 previous lodges show just how slow Pittsburgh was to develop communal institutions: Cleveland, Detroit, Evansville, Louisville, Milwaukee, Memphis, St. Louis, and even three in California.

Over the next century, almost every Jewish community in our region would start a lodge. Curious to understand the full scope, I made a list. I found at least 92 lodges across Western Pennsylvania and West Virginia, not including women’s and BBYO chapters.

Going down the list, seeing where and when each lodge pops into existence, you can watch B’nai B’rith spread in six waves. It’s a communal history, told in miniature.

Before the wars
The first wave came between 1866 and 1871. Seven new lodges were formed — two in Pittsburgh, and the rest throughout northwestern Pennsylvania. The discovery of oil in Titusville in 1859 was drawing thousands to that area. Jews came, too. Titusville (Simeon Lodge No. 81) briefly had the third largest Jewish population in Pennsylvania.

Then, oil went bust. The towns shrank, and the lodges closed.

The second wave: 22 lodges between 1901 and 1910. These can be credited to Dr. J. Leonard Levy of Rodef Shalom Congregation and Louis Sulzbacher of Braddock.

Dr. Levy was the voice. There was great concern in those years about the fate of the “Country Jew,” those small-town Jewish merchants living in the heart of Christendom without any communal resources. Levy called B’nai B’rith “applied Judaism,” and saw it as a way to encourage liberal Judaism in small towns without Reform congregations.

Sulzbacher was the feet. He went into the towns to organize people. Working with Levy, he helped form new lodges in Braddock, McKeesport, Washington, Johnstown, Homestead, New Castle, Erie, Sharon, Donora, New Kensington and other places.

The third wave came at the end of Dr. Levy’s tenure—13 lodges in 1915 and 1916. Richard Rauh and Edward Hemple revisited towns with lapsed lodges and started new lodges, especially throughout West Virginia. They also came up with the idea of the regional lodge. Monongahela Lodge No. 776 united Monessen, Donora and Charleroi. Beaver Valley Lodge No 777 did the same in Beaver Falls, New Brighton and Rochester.

They presented B’nai B’rith as a solution to the ideological divide within many small Jewish communities. It was difficult to create a synagogue structure acceptable to both traditional and liberal elements within any given town, and yet few communities could support two congregations. B’nai B’rith was a less fraught way of coming together.

Several were second attempts (Meadville Lodge No. 1193), and one was a third attempt (Allegheny Valley Lodge No. 1233 in New Kensington). Others emerged from growing Jewish communities that were starting to become distinct from the slightly larger communities nearby: Coraopolis (No. 1322) from Aliquippa and Ambridge, Canonsburg (No. 1323) from Washington. The rest were formed in some of the smallest Jewish communities in the region: Kane (likely No. 1321), Midland (No. 1367), the “Tri-Town” lodge covering Scottdale, Connellsville and Mount Pleasant (No. 1362), and the Kiski Valley Lodge with members from Vandergrift, Leechburg and Apollo (No. 1343).

And after
The fifth wave followed World War II. Propelled by rebuilding efforts in Europe and new building efforts in Israel, Judge Weiss, Max Applebaum and Herman Fineberg launched a campaign to add 2,500 new B’nai B’rith members throughout the region.

In pursuit, they created 12 lodges between 1947 and 1949. For many, I couldn’t find a lodge number, suggesting they may have been informal groups that never actually chartered. Some were notably short-lived. The Brownsville Lodge lasted about a year.

B’nai B’rith experimented with new ways to organize people. A “Lawyers Lodge” was created in the late 1940s, but it appears to have drifted inexorably into obscurity.

Consolidation drove the final wave. Of the eight lodges created between 1954 and 1964, six were in the city and suburbs. Altoona and Johnstown had the other two.

Lodges were named for Weiss, Applebaum and Fineberg. Unlike the post-war naming wave, these lodges honored living leaders within the growing Pittsburgh Council.

Henry Goldstein was a key figure in this era. He started a lodge in 1975 for his late brother Eli. It appears to have been the last new B’nai B’rith lodge in the region.

Several towns kept lodges active for decades, merging with nearby lodges when necessary. Consolidation hit the city in the 1980s and consumed District 3 in the 1990s. PJC