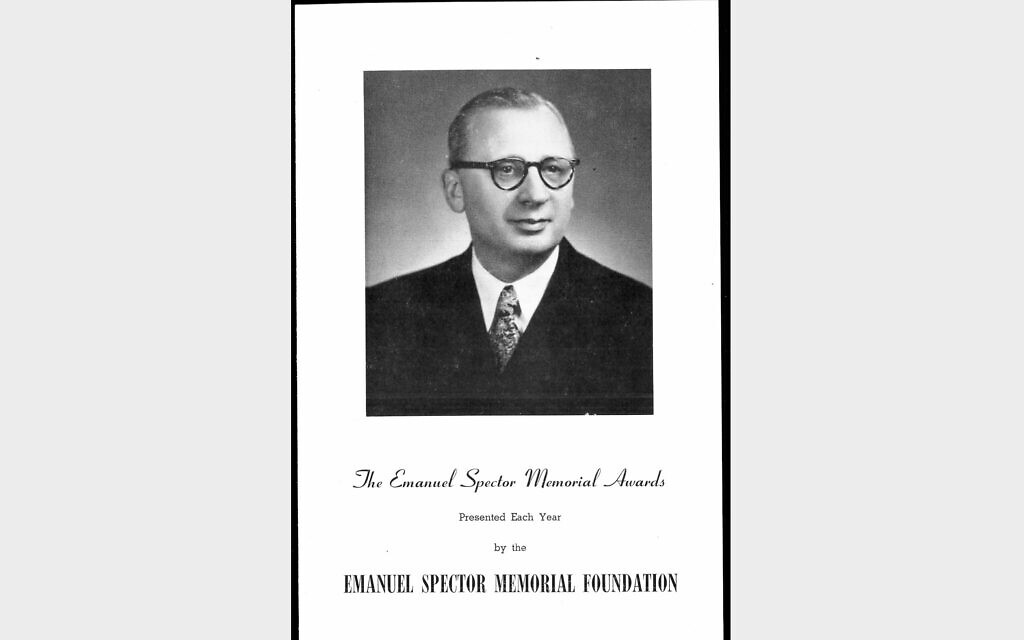 After a year of deliberations, the local Jewish community created the Emanuel Spector Memorial Award in 1953 to honor a beloved communal worker. (Courtesy of the Rauh Jewish Archives)

Nothing is remembered solely on its merits. Even the most important people and the most monumental experiences require active and ongoing promotion. Think how many mementos have been inserted into Jewish life to ensure that the Jewish people remember the Exodus, an event that would seem to need no help in being remembered.

One way to outsmart forgetfulness is by naming things, but even this method is fallible. Thousands zip past Reizenstein Way each day without knowing that the street was named for a school, which itself was named for a Civil Rights activist. But at least the name serves as a clue, giving the curious an opportunity to investigate further.

Here’s another clue. The most prestigious honor in the local Jewish community is the Emanuel Spector Memorial Award. The Jewish Federation of Greater Pittsburgh bestows it each year as something of a lifetime achievement award for volunteer service.

The true measure of any memorial is whether it outlasts everyone who knew the original thing first hand. Emanuel Spector died 70 years ago this month. There are still a few people in the community who knew him. When they go, will he become just a name?

The man
Spector was born in Russia around 1897 and came to Pittsburgh in 1913 with plans to study medicine. He went into business instead. He peddled for a time and saved enough to start E. Spector & Company, a wholesaling house on lower Fifth Avenue.

The turning point of his life came in 1935, when his wife Mary Dorothy Spector died unexpectedly. He devoted his remaining years to raising their daughter, Marjorie, and to communal work. He joined the emerging United Jewish Fund in 1936 and grew in responsibility to become its president in 1948, 1949 and 1950, crucial years when global Jewry needed incredible sums to underwrite a massive resettlement effort following World War II and the Holocaust. He raised more than $7 million in those years alone.

Fundraising might impress, but it rarely inspires devotion. Spector was a magnetic, beloved personality. He was known as “the conscious of the community.” His skill was not raising money but bringing new people onto a cause. Instead of getting a lot out of a few, he got a little out of many — and ultimately he achieved more doing it. One of his sayings was, “It’s not my headache alone, but also yours and yours and yours.”

The fund
The communal grief following Spector’s death was intense. The local Jewish press carried memorial resolutions for months. Those were fairly common after the death of prominent people, but these carried an unusual sense of urgency: “Manny’s passing can become a catastrophe for this community unless each of us resolves in reverence and humility to assume a fair share of his sacrificial labors,” the Y Weekly wrote.

There was a feeling that the community had failed to properly memorialize earlier beloved figures. Strong sentiments had spawned big ambitions that went nowhere. 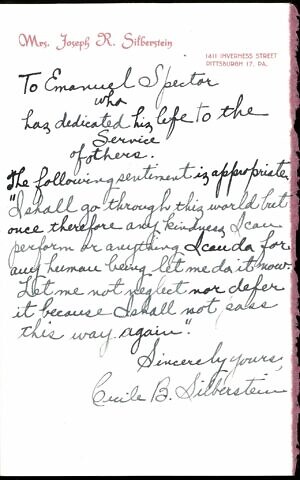 A letter written to Emanuel Spector shortly after his death. (Courtesy of the Rauh Jewish Archives)
And so, just a few hours after Spector’s funeral, his inner circle met at the home of Leon Falk Jr. and decided, somewhat spontaneously, to create “a living memorial that will represent everything fine in our way of life that Mr. Spector stood for.” On the spot, they formed a 45-person committee representing all segments of the Jewish community.

A few weeks later, the committee launched a $250,000 campaign for an Emanuel Spector Memorial Fund and appointed a 14-person subcommittee to work out the details.

The committee went quiet for two months and then scheduled two meetings. The first was an invitation-only affair at the Schenley Hotel in late May. The second was a communitywide memorial service at Congregation Beth Shalom in mid-June. The goal of the May meeting was to raise most of the campaign goal before the June service. The committee had collected just $22,000 despite having grown to a dizzying 108 members.

The strategy failed. By the end of June, the campaign had only raised $35,000 of its $250,000 goal. The committee went quiet again for the rest of the year. It reorganized that December with a new chair, a new name, a new charter, and hopefully new energy.

But as Spector’s first yahrzeit approached in February 1953, the project was still frozen with paralysis. “As the months have passed, the sentiment has been replaced by a conscious loss, a continual question by our leaders — ‘what would Manny do or say?’ This was the sort of persuasive, cohesive leadership which leaves behind a vast vacuum in the ranks of his followers,” the American Jewish Outlook wrote. The person best suited to undertake such an ambitious communitywide campaign was Manny Spector himself.

The award
As Spector’s unveiling approached that spring, the committee finally settled on an idea. It would create three awards in Spector’s memory, honoring causes he admired.

The National Award disappeared by fall, and the Israel Award by winter. Then the scope of the Pittsburgh Award considerably narrowed. It no longer recognized contributions by anyone in Pittsburgh but instead focused on accomplishments by members of the local Jewish community. In practice, it narrowed even further: The first seven awardees were all members of the Emanuel Spector Memorial Committee. One year early on, the Federation gave the award to itself, in honor of its 50th anniversary.

These diminished ambitions might actually explain the persistence of the Emanuel Spector Memorial Award these past 70 years. Awards — especially those without prizes — become prestigious through the stature of previous awardees. Almost half the people who have won the award are directly related to someone else who has won it — parents, children, siblings and spouses. Freda G. Shapira was one of at least six Shapiras to have won the award. In her acceptance speech, she noted that Manny Spector was her cousin.

How perfectly Pittsburgh that the highest honor in the Jewish community values deep roots, personal affection and family traditions over, say, global renown. Manny was known to call his friends twice each day, just to say hello. That’s the spirit of the award. PJC