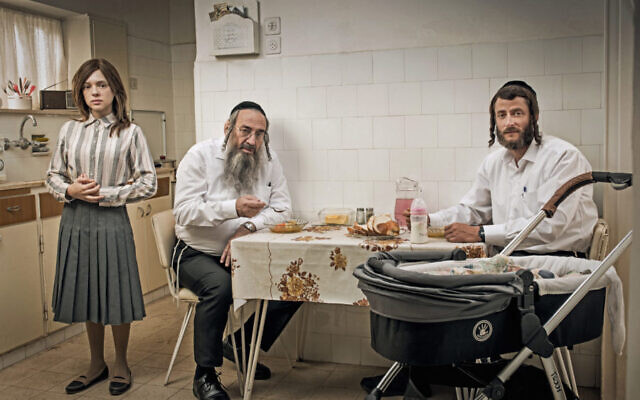 Two Jews, three problems. That’s the mathematics behind “Shtisel,” the runaway hit Israeli dramedy about a family of haredi Orthodox Jews. In 2020, the show’s creators and cast faced down a worldwide pandemic to shoot a third season, coming to Netflix in the spring.

And oy, the problems! The tsuris this Jerusalem family faces was manifest in the Season 3 opener, which a paying audience previewed online during Chanukah. The Temple Emanu-El Streicker Center in New York City, which staged a pre-COVID in-person talk with the stars of “Shtisel” in 2019, sponsored the Dec. 17 preview, which included a virtual panel discussion with the show’s actors.

It’s been five and a half years since production of the second season wrapped. Are the characters older and wiser now? Having watched episode 1, I can say that the answers are “yes” (four years of “Shtisel” time have passed) and “I don’t think so.” Everybody loves “Shtisel” not because the family spends each episode learning Gemara or reading Psalms. It’s because they’re busy exercising their human foibles.

Yes, people plan and God laughs. “God, what do you want from your Jews?” Rabbi Shulem Shtisel, the patriarch, cries out during the episode. But sometimes people just run off the rails all by themselves.

Shulem (Doval’e Glickman) provides a proof text. The day starts off badly at the Talmud Torah where Shulem is principal. One of the boys has stolen from a teacher and Shulem goes to the classroom to chastise the boy. Instead of being humbled, the little stinker defies Shulem, who gives the kid a smack in the face.

Akiva (Michael Aloni), the son, the artist, is still painting. The show’s own McDreamy is now a father himself, now married to Libbi (Hadas Yaron).

But there are money problems. And being three days away from eviction for not paying the rent isn’t Akiva’s worst problem.

And Yossele, Lipa and Giti’s son, who will turn 19 on Purim, would rather learn Torah than have a coffee with the girl the matchmaker has set him up with.

But iron-willed Giti (Neta Riskin) perseveres and Yossele (Gal Fishel) agrees to the meeting, if for nothing else than to keep the family peace. Driving his son to the appointment, Lipa (Zohar Strauss) has some fatherly advice in favor of rushing into marriage: “The less girls you meet, the less you’ll have to compare them to and the happier you’ll be in life.”

Or as Shulem notes elsewhere: “When life hands you lemonade, take it.”

Yossele meets the girl, whose name is Shira, and a shy chemistry ignites between them. There, at a table in the hotel lobby, he sings to her. She confesses that she goes to the Ramot Forest “when I’m scared.”

“Describing yourself as being scared takes courage,” Yossele tells her.

He’s smitten. “We had an amazing connection,” he tells his parents the next day. “I love her.”
Very. Big. Problem.

On “Shtisel,” the problems expand exponentially. There are so many of them in that first episode that there wasn’t any room for Ruchami’s problems. Played by Shira Haas, Ruchami sits behind a desk in the Talmud Torah’s office in her brief scenes with Shulem, her grandfather.

Since becoming an international phenomenon, there has been clamor for more from TV’s favorite halachically observant family.

So what took Season 3 so long?

“It could have been much longer.”

That’s “Shtisel” co-creator and writer Ori Elon speaking during the virtual panel discussion. For Elon, the characters weren’t packed away in mothballs during the hiatus.

“I always feel the Shtisel family is living their own lives without me. I imagine them sitting around the table without me,” he said.

For the actors, playing a character is like riding a bicycle.

“It was great to come back to him,” Glickman said, of Shulem. “I know him.”

“The majority of the work of getting to know the character we did eight years ago,” Riskin said. “Even if you haven’t met them for five years, it doesn’t matter.”

Eventually, the questioning from SiriusXM’s Jessica Shaw reached answers that the cast wouldn’t give. The audience was treated to polite responses to variations of “So what’s going to happen this season?” They boiled down to, “I can’t tell you. You’ll have to watch the show.”

Riskin delivered the most succinct reply. She pursed her lips and shook her head no.

It was dinnertime on the East Coast, nearly midnight in Israel. Despite the late hour, the Israeli actors each lit a menorah.

The yoke of Torah requires one set of obligations. The necessity of promoting a TV show another. The cast of “Shtisel” is familiar with both. PJC

David Holzel is editor of the Washington Jewish Week, a Chronicle-affiliated publication where this article first appeared.