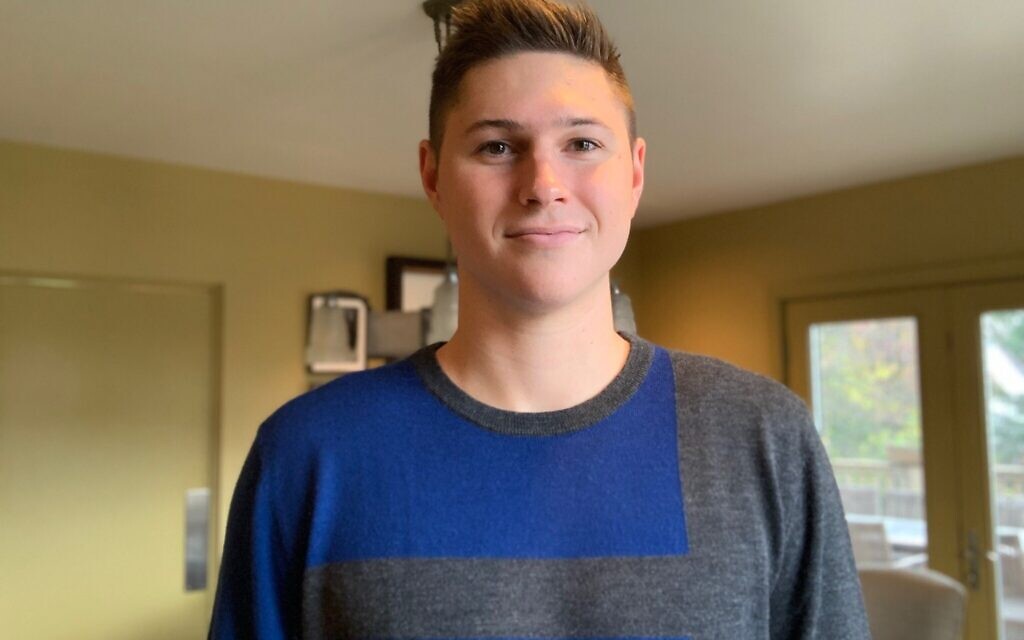 After just over a year-and-a-half of working at Jewish Federation of Greater Pittsburgh, Dylan Groff is headed back to school to complete a dual degree program at CMU and Pitt.

Groff, 25, worked at the Federation’s Community Relations Council as a council associate alongside Director Laura Cherner. Before working at the CRC, Groff graduated from Amherst College in 2019, then relocated to Washington, D.C. Once resettled, he worked at the American Israel Public Affairs Committee and interned for Sen. Bob Casey.

Before this new phase in his life, Groff talked to the Chronicle about his stint at the CRC and his future.

Can you talk about your responsibilities while working at the CRC?
So, it was a pretty broad spectrum. I dealt with everything from interpersonal relationships between me and other community leaders to other people in similar roles at different organizations. There was a big emphasis on outreach and relationship building within college campuses, especially at Pitt, CMU and Duquesne. Then there was the other side of things, which was like government relations, lobbying and writing letters to legislators. And, of course, day-to-day maintenance and programming things like the Juneteenth program that we put together last year [and] the Pride programming that we did this last month in June.

Are there certain parts of your work that are your favorite?
This might sound a little silly, but my favorite parts were the relationship building. Getting coffees with people from different organizations, brainstorming and just developing a rapport so that maybe there’s places where [there’s] projects or programs that we can work on together. But really, that just comes down to getting to know each other, being there for each other and putting the work in to maintain those relationships. I really like people, and this was an excuse for me to get paid to meet people. That was one of my favorite parts.

Is there something you’re most proud of at the CRC?
I take a lot of pride in a lot of the programming that we did through the CRC. The things I point to are the Coffee and Conversations series we ran both for the mayoral election and most recently for the primary elections. Particularly the one for the House seat to replace Mike Doyle. Things like that. I’m very proud of getting information right in front of our community and our constituents. Other things like the Juneteenth and the Pride programming, it’s a way to show solidarity with other communities and to build those relationships in a work setting. Those things stick, putting that effort in sticks. It goes a long way with these other community leaders and other communities in general. That’s something I think we did a particularly good job with. I think [CRC Director] Laura [Cherner], in particular, is phenomenal at that kind of work. Learning under her and watching how she approaches these kinds of things, I’m proud to have had that opportunity.

You grew up in Squirrel Hill and have a long history in the community. What was it like working in a leadership role in the community?
It was very different coming to the Federation, in large part because, until I took this position, I knew the Federation existed but I did not necessarily engage [with it], especially considering I had no income. It’s obviously a donor-based organization and a lot of what they do is fundraising. I was not really on their radar until after college. Being in a leadership position, I’m not sure it was much different in terms of how I interacted with the community. It felt very natural to step into this role. Perhaps the only difference was people speaking a little bit more freely and looking towards me, towards Laura, towards the Federation to address certain issues that they were particularly passionate about. Feeling empowered to do something about that –– that was new. It’s always nice to talk about the issues and to go back and forth with somebody you’re having a coffee or a meal with. But to actually have the tools at my disposal to do something about it, that was a great thing.

Now that you’re no longer at the CRC, what does the future look like for you?
I’m starting a dual degree program at Pitt and CMU to get a JD, a law degree from Pitt, and a master’s in public policy from CMU. So I’ll be starting at CMU in the fall and then proceeding to law school after that, and wrapping up both of those programs in the next four years.
I’m looking forward to it. It’s the stuff I’m interested in. And, of course, they’re both phenomenal schools.

You have a background with Israel-advocacy and working with Sen. Casey. Do you think you’d find yourself in either of those arenas again?
Not necessarily in a Federation capacity, but since I’ve come back from Pittsburgh, I’ve been involved in some local organizing and some local political efforts within the city. I really do really enjoy organizing in general. One of the things that drew me to this position was that I got to organize programs and things for the community. Especially in the political climate that we’re in right now, there’s a lot of work to be done, and I don’t see myself stepping away or shying away from that kind of work. Exactly where I’m going to be when I graduate, I’m not entirely sure. But I am doing this program because it’s going to give me more tools to be able to serve in Pittsburgh and the communities I find myself in. That’s why I’m doing it.

Do you have anything that you’d want to see happening differently in the Pittsburgh Jewish community in the future?
I know a big emphasis of our work has revolved a lot about identity and how we see ourselves within the Jewish community. There’s been a lot of talk about younger Jewish people feeling disconnected. From an end goals point of view, I would love to see more engagement from people my age, especially about issues both domestic and international related to Israel. I think one thing that needs to happen before that can be achieved is listening a little bit more from establishment leaders. The younger generation has a different experience. They have a different way of looking at things, and I think they’re not right all the time –– I know I’ve been wrong personally on countless occasions –– they bring something to the table, and it’s worth listening to and taking seriously. I think a lot of those opinions and methods of going about things are grounded very much in Jewish values and how we see our own Jewish values. I think that needs to be taken a little bit more seriously.

What else would you like to say?
I really want to say thank you to Laura, first and foremost, but also to Jeff and Brian and everybody at the Federation –– all the different people I’ve met and I had the opportunity to work with. It was a short stint. I wasn’t exactly sure how long I was going to be with the Federation in this position. But being able to work within my community and do something for the city and the community that has done so much for me, I’m very grateful for that. I’m just glad that they gave me the opportunity to learn under some brilliant people over at the Federation and within the various different Pittsburgh communities, Jewish and otherwise. PJC