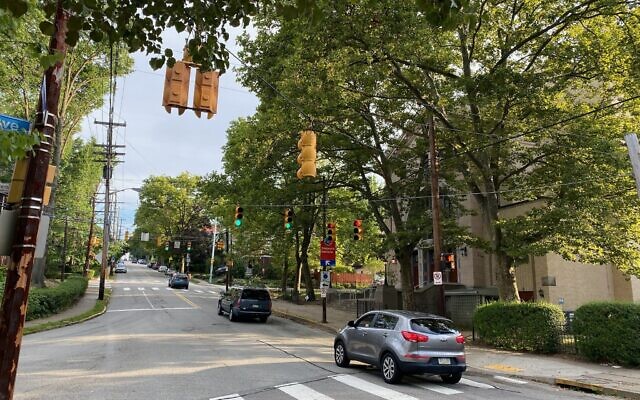 The intersection at Shady, Phillips and Tilbury avenues in Squirrel Hill (Photo by Jim Busis)

Squirrel Hill residents are raising concerns about the safety of a neighborhood intersection but city officials say they might not have the money – just yet – to fix it.

Rick Wice, who has attended services at Congregation Poale Zedeck at the intersections of Shady, Phillips and Tilbury avenues for more than 10 years, said the arrangement and timing of lights at the site is an accident waiting to happen.

“It’s a bad intersection – the city knows it, the people know it,” said Wice, a Squirrel Hill geologist who teaches part-time at Carnegie Mellon University. “We’re lucky no one’s been hurt there.”

The intersection is a strange one, with three lights at three different nearby junctures. The Southwestern Pennsylvania Commission completed a road safety audit, which included the intersection, in 2019.

Despite these warnings, Pittsburgh officials say they do not know when they will manage to upgrade the intersection.

“The Department of Mobility and Infrastructure plans to replace the traffic signals at this intersection once the funding becomes available,” said Tim McNulty, a spokesperson for Pittsburgh Mayor Bill Peduto. “Obviously, budgets are rather tight right now due to the pandemic so we do not have a timeline on when the upgrades can be made.”

Wice said “we do not have a timeline” isn’t good enough. He remembers, a few years ago, when a car speeding through the intersection hopped over the sidewalk near Poale Zedeck synagogue.

“He almost drove up all the steps of Poale Zedeck,” Wice said. “Imagine that happening on a Saturday.”

Several recent posts on the Facebook page “Jewish Pittsburgh” cited numerous examples over the years of accidents occurring at the intersection caused by cars running red lights there, with members of the group encouraging one another to make 311 calls to complain.

Pittsburgh Police in Zone 4, which is headquartered in Squirrel Hill, say they are aware of the problem but it has not become a severe one, said Maurice Matthews, a public information officer for the city’s department of public safety.

“We have had a few minor collisions but nothing too serious,” Matthews told the Chronicle. Matthews confirmed recent accidents at the intersection but said Zone 4 had no record of pedestrians ever being struck there.

Uniformed Zone 4 police sometimes station themselves at the intersection to deter speeding.

“Obviously, our officers can’t sit there all day,” O’Connor said.

Despite the COVID-19-related financial crunches that could delay repair or upgrade of the intersection, O’Connor said he would like city officials to look into alternative methods of controlling traffic there, such as installing speed bumps or working on the timing of the lights.

“We need out-of-the-box thinking to slow people down,” he said. PJC