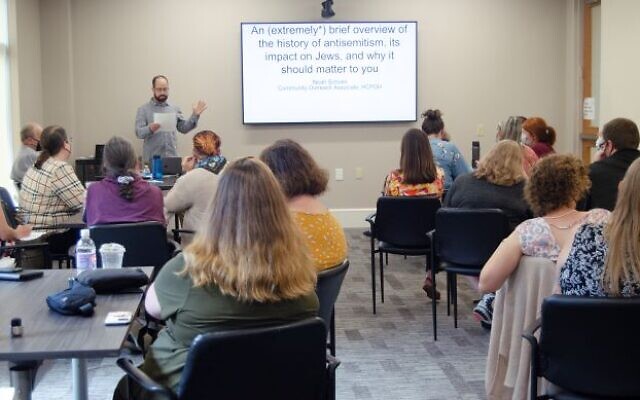 Despite only viewing the Tree of Life building from a bus window while on a tour of Squirrel Hill, Shelby Denhof couldn’t help but feel moved.

“I’ll be honest,” she said. “I had a pretty emotional reaction to the Tree of Life synagogue, physically being there.”

Denhof traveled to Squirrel Hill with 20 other middle and high school educators from across the United States as part of Seton Hill University’s National Endowment for Humanities Summer Institute. The two-week program, “Grappling with Genocide: Fostering Empathy and Engagement through Text and Image,” is the result of a grant the university received from the NEH last fall. It aims to “connect best practices in genocide education with contemporary global conflicts through the power of narrative,” according to promotional materials.

A Judaic studies teacher at the United Jewish School in Grand Rapids, Michigan, Denhof previously taught English in the Rockford Public Schools District and is the engagement director of her synagogue, Temple Emanuel. She has attended various NEH fellowships since 2018.

Denhof came to Pittsburgh before the Institute began so she could spend time in Squirrel Hill. Grand Rapids, she explained, isn’t a Jewishly dense part of the country. She was excited to see what Pittsburgh’s Jewish neighborhood had to offer.

“It was a treat for me to go to Squirrel Hill and see the density of synagogues and the kosher grocery store and bagel shop,” she said. “This is something I don’t have. It was important for me to come and seek out more of a Jewish experience in addition to the fellowship.”

While the Summer Institute doesn’t focus exclusively on the Holocaust or the Pittsburgh synagogue shooting, the program did offer some unique learning opportunities. In addition to the bus tour, led by Eric Lidji, director of the Rauh Jewish History Program and Archives at the Senator John Heinz History Center, participants spent time hearing from the 10.27 Healing Partnership’s Ranisa Davidson. Noah Schoen and Holocaust Center of Pittsburgh Director Lauren Bairnsfather also discussed the oral history project “The Meaning of Oct. 27.”

“We watched some clips of the rabbi at the Tree of Life synagogue after the tragedy,” Denhof said. “I was listening to him speak about his community so freshly after the tragedy. It was something that brought me to tears and I had to step away.” 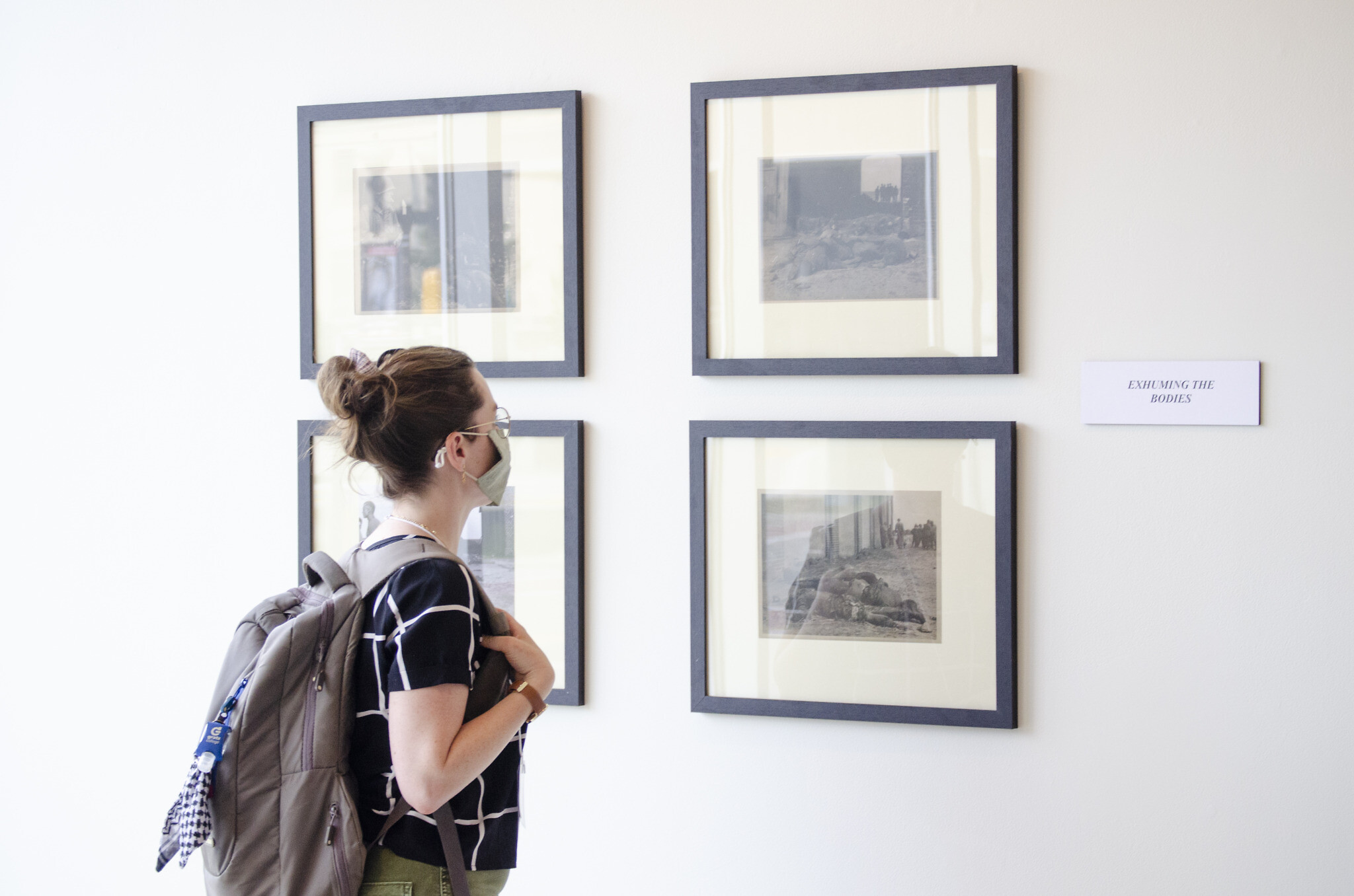 Shelby Denhof, a teacher at United Jewish School in Grand Rapids, Michigan, views one section of an exhibit of photographs from the Harry B. Knights Collection taken at Gardelegen, a German town that was the site of a terrible atrocity at the end of World War II, at the Seton Hill Arts Center as part of the National Endowment for the Humanities Summer Institute July 11, 2022. Photo provided by Seton Hill University.

The teachers taking part in Summer Institute represent a cross-section of public and private schools, according to Christine Cusick, who co-directs the program along with John Spurlock, former coordinator of the Genocide and Holocaust Studies certificate program at Seton Hill.

Squirrel Hill, Cusick said, is an example of a community working within a larger neighborhood to ensure it is not solely defined by the shooting at the Tree of Life building.

“The community is more than just the tragedy,” she said. “You have to look at the richness and history and the present ways they contribute to the larger community.”

James Paharik, director of the university’s National Catholic Center for Holocaust Education, helped Cusick organize the day. He said he hoped the program would help teachers make the Holocaust and other genocides more relatable.

“I did a session about telling the stories of the people who were involved either as rescuers or resistors during the Holocaust,” he said. “When students hear the stories of individual people involved, it brings it to life for them.”

He also hoped the trip to Squirrel Hill would place the Pittsburgh synagogue shooting within the context of a growing pattern of antisemitism and extremism in the United States and show what happens to a community that experiences a massacre stemming from hate.

“We hear about these racially charged murders all the time happening around the country, like in Buffalo, New York,” Paharik said. “You hear about the perpetrator, and you hear about the victims, but you don’t often understand the long-term effects it has on the community. That’s why we took them to Squirrel Hill. We wanted them to understand that Squirrel Hill is a vibrant, functioning community, a really unique part of Pittsburgh and, in many ways, what a functioning neighborhood should be.”

Rabbi Ron Symons, director of the JCC’s Center for Loving Kindness, spoke to the educators who came to Squirrel Hill, explaining that the mission of the center, which opened 14 months before the Oct. 27 shooting, is dedicated to three main values: Love your neighbors as yourself; do not stand idle while your neighbor bleeds; and, redefining neighbor as a moral concept.

“Being with teachers from across the country, trying to use Holocaust education to help improve the moral quality of society by teaching our youngest generations how it is that they should learn these lessons was a real privilege,” Symons said.

Understanding the Holocaust, as well as understanding anti-Black racism and anti-immigrant racism, he continued, is foundational to embracing loving kindness in our society to help us live together in communities.

For Denhof, who is working with her school to revamp its older-teen curriculum, the trip to Squirrel Hill inspired her to think about reshaping an exploration of Jewish experience.

“Not placing so much emphasis on tragedy as being the defining part of the Jewish people but rather embedding more of that history organically and making that relevant to my students’ lives today,” she said.

The Summer Institute continues through July 22, examining modern genocides, including both the Rohingya and Yazidi genocides. PJC