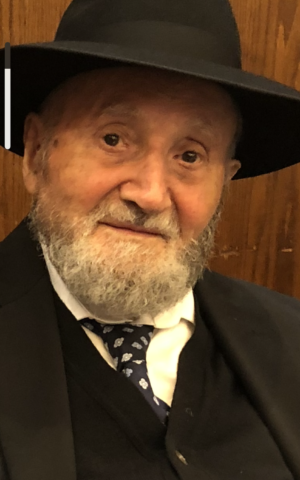 GLATSTEIN: A towering figure in the annals of Pittsburgh Jewish history for over 70 years, Rabbi Mordecai Leib Glatstein died on the first day of Pesach in Brooklyn, New York, where he had been living in the home of his son Yossi and Ettie Glatstein since the passing of his beloved wife Cyna in 2018. A survivor of the Warsaw Ghetto, slave labor camps and multiple concentration camps, and a first-hand witness to the destruction of Polish Jewry, he was finally liberated from the infamous camp at Dachau in April 1945. Rabbi Glatstein spent the immediate post-war years as deputy director for the Joint Distribution Committee as a provider of religious and educational services for fellow survivors, helping to reunite families that had become separated, searching for Jewish orphans, and rebuilding Jewish institutions in the Displaced Persons Camps established after the war. He often spoke of an especially memorable encounter with General Dwight Eisenhower, whom he accompanied for a time as translator. In Munich, he served as a chaplain for the U.S. Army, and was appointed to catalogue Jewish artifacts that had been looted by the Nazis and gathered in Prague for what was to have become the Museum of the Extinct Jewish People.
Arriving in Pittsburgh in 1949, Rabbi Glatstein served as a teacher, congregational rabbi, and for more than five decades, spiritual leader of the Charles Morris Center of the Jewish Association on Aging (formerly the Jewish Home and Hospital for the Aged). He published extensively in Hebrew, Yiddish, English, German and Polish. A member of the faculty of the College of Jewish Studies and Hebrew Institute of Pittsburgh, he was also rabbi of the Toras Chaim Congregation in the East End from 1951 to 1958, president and head of Jewish Chaplains of Pennsylvania, as well as a founder of the Va’ad Harabanim of Pittsburgh from its inception.
Having watched so many of his fellow Jews die under the most heinous circumstances, he embraced the mitzva of “chesed shel emes“ – officiating at funerals for those without families or means to imbue their deaths with dignity and ensure a proper Jewish burial. He also recited the Kaddish prayer daily in memory of those who perished at the hands of the Nazis and their collaborators who did not have surviving family to say Kaddish for them.
Born in Lipno, Poland, in 1916 into a rabbinic family, he lost his father to the Spanish flu as a young child and spent several years living with his grandparents in Linshitz, where he attended cheder. He was the eldest of three brothers. Rabbi Glatstein was recognized early as a Talmudic prodigy and known as the “Illuy (Genius) of Plotzk” where he attended Yeshiva. He received smicha (ordination) from the Mesivtah Rabbinical School in Warsaw; a master’s degree from the University of Pittsburgh; and a doctorate from Dropsie College in Philadelphia.
Both he and his wife recorded oral histories for Steven Spielberg’s Shoah Foundation. March 28, 1993, was officially declared Rabbi Mordecai and Cyna Glatstein Day by the Mayor of Pittsburgh Sophie Masloff in recognition of their major contributions to enhancing the lives of their fellow citizens and the Jewish community. Both Rabbi Glatstein and Cyna were beloved by all those who knew them and the countless people whose lives they touched.
Rabbi Glatstein was buried beside his wife Cyna on the Mount of Olives in Jerusalem on the 4th day of Passover, surrounded by family and dozens of mourners. He is survived by his children Hannah, Yossi and Yitzchak and their spouses, and loving grandchildren and great-grandchildren, nephews and nieces who cherish his legacy — his kindness, scholarship, altruism and love for Judaism that will forever stand as an example to follow. PJC