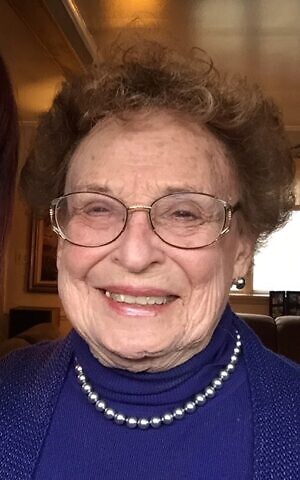 LIEBERMAN: Marcia S. Lieberman, 96, of Beaver Falls, died Wednesday, Dec. 30, in her home of more than 65 years. Born on April 9,1924 in Beaver Falls, she was the daughter of the late Leonard and Ruth (Gordon) Silverblatt.
A graduate of the University of Pittsburgh with a degree in sociology and psychology, she spent much of her professional career as a counselor at Beaver County Community College. Following years of service to Gateway Rehab, counseling drug rehab and addiction recovery adults who were in need of their GED certification, she was named 1998 “Volunteer of the Year,” an honor matched by her husband several years later. And, as a direct result of caring for her husband — who had been diagnosed with Alzheimer’s for more than a dozen years at home, she was an active participant in the Alzheimer’s Association Caregiver Support Group. She was also a focus of a 2014 Beaver County Times lifestyle series on aging and caregiving.
But the most impactful part of her life may well have been the relationships developed with anyone who met her. Her circle of friends was vast and longstanding, and her positivity, resourcefulness, understanding and caring had a profound effect on the lives of dozens of close friends and hundreds of others throughout her rich life.
In addition to her parents, she was preceded in death by her husband of 68 years, Dr. William B. Lieberman, who died in early 2015. She is survived by her daughter, Kathy Lieberman, Philadelphia; her son and daughter-in-law Jay and Colleen Lieberman, of Rolesville, North Carolina; and two grandsons, Benjamin and Joshua Lieberman. In addition, she is survived by her brother, Ronald Silverblatt, of Monroeville, and a number of “surrogate adult children,” people that she and her husband mentored throughout their lives.
Private graveside services for the immediate family were held Jan. 1 at Agudath Achim Cemetery in Beaver Falls, with Cantor Rena Shapiro (Beth Samuel Jewish Center, Ambridge) officiating.
Over the years, she provided her time, energy, creativity and philanthropic support to a great number of local and national organizations. To respect her many interests, donations may be made in her honor to any charity of your choosing.
Arrangements by Hill & Kunselman Funeral Home, www.hillandkunselman.com, 3801-4th Avenue, Beaver Falls, PA 15010. PJC