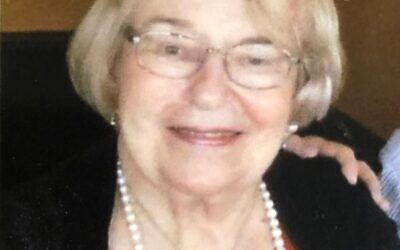 She was born May 29, 1922 in Pittsburgh to the late Irving E. and Mary Levinson Cohen, and was married to Milton S. Gordon, MD for 53 years, from 1954 until his death in 2007. Dr. Gordon served in World War II and as a M*A*S*H* doctor during the Korean War. They resided in New Kensington, where Dr. Gordon practiced family medicine his entire career, until 1994, when they relocated to Fox Chapel.

Lucille and Milton were the proud parents of Robert L. Gordon of San Diego and Harold J. Gordon of Philadelphia, and the proud grandparents of Emma and Sarah Gordon, twin daughters of Harold. Lucille graduated from Taylor Allderdice High School in 1940 at the age of 17 and was a member of the National Honor Society.

Lucille was a legal secretary for many years and took courses at the University of Pittsburgh in the evenings. She then worked for the Office of Price Administration and was in charge of permitting people to use, or not to use, gasoline when it was restricted during World War II. Her last position prior to her marriage was as a private secretary to the highly respected Dr. Solomon B. Freehof, head Rabbi of Rodef Shalom Temple in Pittsburgh.

Lucille was a longtime member of the former Beth Jacob Synagogue of New Kensington and more recently, Adat Shalom B’Nai Israel Beth Jacob Congregation in Fox Chapel and she was active with many civic organizations, including Citizen’s General Hospital Auxiliary, B’Nai Brith and Hadassah. She was quite charitable, giving, in small amounts, almost daily.

She was grateful for her brother-in-law Norman Gordon’s help in many ways, as they resided in the same condominium building. Also for her good friend of many years, Ruth Silverman of Sarasota, FL. She was thankful for her caregivers Lynne Porter, Sherael Habay, Tina Bruns, Pat Santarcangelo, Jan Rochez and Sarah Adams, and her physical therapist, Tina Wettengel. Also long-time friend Joan Horcicak, and, in memoriam, Louise Cravener.

Mrs. Gordon is survived by her sons and granddaughters, her brother-in-law, her niece Nancy Denmark Klasterka, and nephews Paul and Ron Denmark, as well as great nieces and nephews. Besides her husband she was preceded in death by her sisters, Dorothy Cohen Wolovitz, and Corrine Cohen Denmark. Lucille was very involved with her children and grandchildren. They were the light of her life.

Visitation will be from 10 AM until service at 11 AM on Thursday, June 18, in ROSS G. WALKER FUNERAL HOME LTD., 217 Freeport Road, New Kensington. Rabbi Yaier Lehrer, will officiate at the service and burial will follow in Chebra Kadisha Cemetery, New Kensington. In lieu of flowers, contributions may be made to Adat Shalom Synagogue, 368 Guys Run Road, Cheswick, PA 15024, or the charity of your choice.

August 11, 2020
Right Now
COVID-19
Local congregations ready for a once-in-a-century High Holiday season
By David Rullo | Staff Writer
Most congregations are planning for online services, while some others are opening their doors with restrictions on the number of worshipers.

August 12 , 11:00 am - 12:00 pm
Submit an Event
Pittsburgh Jewish Chroncle
Weekly Edition
Free to Your Inbox
The email is either missing or invalid.
By signing up, you agree to our terms You hereby accept The Times of Israel Terms of Use and Privacy Policy, and you agree to receive the latest news & offers from The Times of Israel and its partners or ad sponsors.
PJC DIGITAL EDITION
View previous issues
Local
Features
Opinion
National
World
Scroll to view more