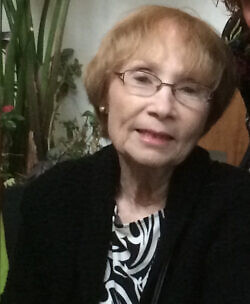 LEWIS: Eileen Ruth Lewis, May 17, 1934 – Oct. 24, 2020, of Brookline, Massachusetts, formerly of Pittsburgh. Eileen was born and raised in Pittsburgh and lived in the neighborhoods of the Hill District, Greenfield and Squirrel Hill until 2017, when she moved to Brookline, Massachusetts to be closer to her sons. Eileen was born in 1934 to Samuel Cohen (“Zadie”) and Ethel (Rubenstein) Cohen (“Bobo”), both of Pittsburgh. She remained an only child. After attending Fifth Avenue High School, Eileen worked as a bookkeeper until she met her husband, Norman Lewis, at a dance at the YMWHA in Oakland. They were married in September 1953. Four years later, their son Mark was born. Allan was born eleven months later. Eileen was a devoted wife and mother. While her children were growing up, she was active in various organizations and enjoyed playing mahjong with friends. Eileen did not learn to drive a car until around age 40. After her two boys went to college, she began working again. She had a long career at Jewish Family and Community Services, which was like a second family to her. She kept working there into her early 60s. Eileen also liked sports. In the 1960s and ’70s, she regularly watched Studio Wrestling and was a big fan of the professional teams, particularly the Steelers. She rooted for the Boston teams after moving there, especially the Patriots, Red Sox and Celtics. Her loyalties were torn when the Steelers played the Patriots. Eileen watched golf on TV, despite having never played it. While living in Squirrel Hill, she walked many places and exercised at the JCC. Music was a big part of Eileen’s life. She played the violin some as a youngster. She loved classic Broadway musicals. She used to go on bus trips to New York City to see Broadway shows. After retiring, Eileen sang in a chorus that performed at senior residences. In her three-plus years in the Boston area, Eileen made friends with many at her wonderful apartment building run by Center Communities of Brookline. Eileen was predeceased by her husband Norman Lewis, Norman’s many siblings and their spouses, her parents, her uncle and aunt, Joseph and Mildred Rubenstein, and many of her friends. She is survived by her sons Mark Lewis of Boston (and Stella Bondar) and Allan Lewis of Newton, Massachusetts (and Susan Weiner), her grandson Brian Lewis of Providence, Rhode Island (and Anne Lewis) and many cousins in Pittsburgh. Graveside services and interment were held at Tree of Life Memorial Park. Donations in Eileen’s memory should be made to the Alzheimer’s Association of America, Hebrew SeniorLife of Boston or the charity of your choice. Arrangements entrusted to Ralph Schugar Chapel, Inc., family-owned and -operated. schugar.com