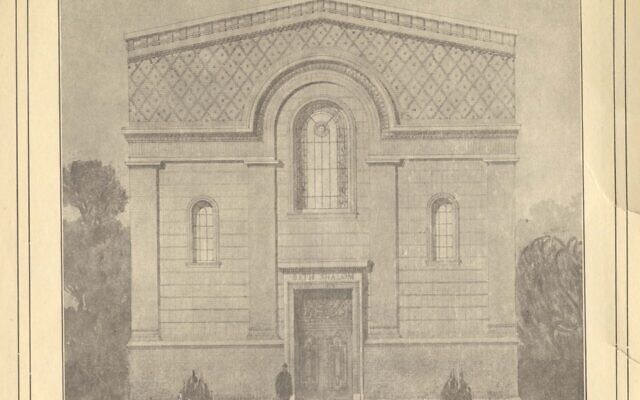 The frontispiece of the 1924-1925 Beth Shalom yearbook included an illustration and a description of its new Community House. (Image courtesy of Rauh Jewish Archives)

Congregation Beth Shalom is often credited with building the first synagogue in Squirrel Hill. That claim is true, but it misses the essence of the Beacon Street building.

The Archive recently received a copy of the first Beth Shalom yearbook, published before the High Holidays in 1924. The congregation had been around for seven years and had dedicated the first section of its building a year prior, in September 1923.

Today, that original structure is hidden amid a century of renovations. It sits in the middle of the complex, between the tall main sanctuary and the long educational wing.

Early on, Beth Shalom explicitly did not call this building a “synagogue.” It was the “Community House.” It was purposefully set down the block a little because the congregation was saving the prominent corner lot for its synagogue, dedicated in 1931.

The yearbook contains a description of the four-story Community House. The basement had a gymnasium, a kitchen and a boiler room. The main floor had an office and a reception area in front and a locker room in back with 100 lockers and eight showers. The second floor had six classrooms and an auditorium that initially served as the Beth Hamedrash. The third floor had a balcony overlooking the auditorium (presumably for women in the days before the congregation allowed mixed seating).

The 1931, 1970 and 1996 renovations of the building essentially turned the Community House into a corridor connecting the newer wings on either side. Walking through the building today, it is hard to picture the layout of that original section.

The Community House was visionary because it recognized two facts. First, the Jewish population of the 14th Ward was growing much faster than any other part of the city. The thousands of Jews who might someday support future construction would eventually arrive in Squirrel Hill, but they needed to see something worth supporting.

Second, the Jews coming to Squirrel Hill were diverse. They claimed no single place of origin in Europe, nor any one denominational affiliation. A fair number had no interest in the religious side of Judaism. The yearbook has greetings from local Orthodox, Conservative and Reform rabbis, and local Jewish educators, all endorsing Beth Shalom.

We often talk about a wholesale Jewish migration from the Hill District to Squirrel Hill. But the Jewish population of Pittsburgh and its immediate vicinity in the 1920s was actually spread across about 20 city neighborhoods and small towns. Consider the leaders of Beth Shalom at the time of the dedication. Where were they living a decade earlier? At least a third came from outside the Hill District — two from Lawrenceville, two from the North Side, two from Oakland, one from East Liberty, and another from Homestead. The Community House encouraged the consolidation we have today.

The Community House had no strong ties to any other place in the city, nor any other region of the world, nor any specific approach to Judaism. It was meant for everyone. Not until the arrival of the Hebrew Institute, the Squirrel Hill Boys Club and the Irene Kaufmann Center in the 1940s did Squirrel Hill have Jewish gyms, auditoriums or classrooms to rival Beth Shalom. Until then, the Community House held the center.

In his remarks in the yearbook, Beth Shalom’s Rabbi Goodman A. Rose, on the job just three months, wrote, “We in this section are laying the foundations for a new Jewish community, distinctive, and in certain respects different from those from which we had come. We must organize our Judaism and mould our spiritual structures. What plans have we to follow? No set rules, no standard patterns, no fixed precedents are available for our guidance. We must think out our way step by step and act by act — this only being our unswerving principle, that not an iota of our Judaism is to be sacrificed.”

By the time Beth Shalom dedicated its sanctuary in 1931, Squirrel Hill had two more congregations — Chofetz Chaim and Poale Zedeck. These Orthodox newcomers allowed Beth Shalom to move act-by-act toward Conservative Judaism and brought Squirrel Hill step-by-step closer to the full-spectrum of Judaism it came to represent. PJC