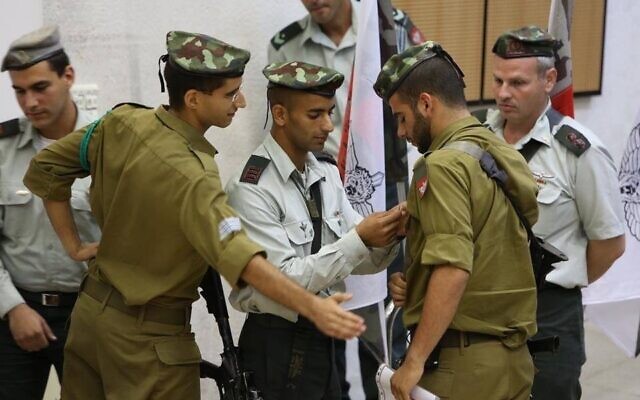 Isaac Nadoff – part of the latest generation of a notable local Jewish family – grew up in Squirrel Hill, but his story as a Pittsburgh paramedic actually starts some 6,000 miles away.

At 18, Nadoff (“Yitzy” in the Orthodox community to which he belongs) moved in with a transplanted Pittsburgh family, the Aharons, in Hashmona’im, Israel and joined the Israel Defense Forces, just months after graduating Yeshiva Ateres Shmuel in Waterbury, Connecticut. Once rigorous training had ended, conflict broke out between Israel and the Palestinians, and Nadoff rushed to serve on the front lines as a combat medic.

“I found out that we were moving up to the Syrian border. The soldiers that were there were getting sent south. They would be on the first ground force to go [into Gaza]. We would be taking their place on the Syrian border and would be the second wave to go into Gaza, should it come to that,” said Nadoff, now 26, of Squirrel Hill.

“I was able to see Syria without any binoculars; I was less than a kilometer away,” he remembered. “Later that night, we had a briefing on the rules and regulations for operating on the border. During the briefing, we heard a whistle overhead. A mortar was inbound from Syria. Our captain stopped speaking, looked at us and gave a small smile, which said, ‘This is it, we’re in it now.’ The mortar landed on a hilltop nearby, we all breathed a sigh of relief and the briefing continued. We spent many nights in the bomb shelter.”

David Nadoff, father to Yitzy and his nine siblings, said his son’s conscientiousness and caution gave him comfort while Yitzy was serving with the IDF.

“It never occurred to me to worry about him on the front lines,” he said. “He’s good at his job … and he’s a driven kid.”

For all the anxiety that one might expect a Pittsburgh teenager to experience in a war zone, the younger Nadoff stressed the service was what he expected it to be.

“I understood what living for others meant, drawing on what I saw growing up and seeing how my parents lived to help others,” he said. “Over time, my motto became ‘We work so that we may help others that can no longer help themselves.’”

Yitzy, who became an EMT in 2016 and was sworn into the ranks as a Pittsburgh paramedic earlier this year, is far from the first Nadoff to live by such directives. The family’s roots in Pittsburgh stretch back more than 100 years. Nadoff’s grandmother was an assistant principal of the Yeshiva Girls School and his grandfather was a respected community leader and mohel who performed more than 4,000 brit milah.

In Pittsburgh’s Jewish community, which is close-knit and connected, the Nadoff name is familiar.

“I have treated two Jewish women who, after seeing my name tag, asked me if I was related to the mohel, Rabbi Nadoff,” Nadoff said. “One of them lived next door to him on Shady Avenue many years ago and my grandfather had done all of their children’s and grandchildren’s circumcisions.”

For Nadoff, the sense of duty imbued by his Jewish values and upbringing are inextricable from his dedication to saving and preserving the lives of Pittsburghers as a paramedic. And his family’s role in the Jewish community is important to him.

“Yitzy’s not a foolhardy kid – he puts on his seat belt, he dots his i’s and crosses his t’s,” said Nadoff’s father. “Yitzy is very aware, and we all are, that we have roots in the Pittsburgh Jewish community.”

About a year ago, Chief Ronald Romano of the city’s Bureau of Emergency Medical Services asked Nadoff where he saw himself in five years’ time.

“Still living in Pittsburgh, possibly raising a family, still working with the city, and continuing the legacy that my family has been creating here since 1916,” he responded, almost automatically.

“[This job] takes a toll on you after a while,” Romano told the Chronicle. “So, it’s good to have that enthusiasm.”

“[Nadoff] must be doing his job because I’m not hearing otherwise,” Romano laughed, stressing the comment was high praise for somebody new with the crew. “He’s been a good employee – I hope he’ll continue.”

Any discussion of emergency services and Judaism in Pittsburgh also, tragically, is incomplete without mentioning the Oct. 27, 2018 massacre at the Tree of Life*Or L’Simcha building on Wilkins Avenue in Squirrel Hill. The attack, which occurred as Nadoff attended a bar mitzvah service just one mile away at Shaare Torah Congregation, moved him deeply, and right from the start. He even volunteered with the Chevra Kadisha to deep clean the synagogue after the shooting, something he recorded in harrowing tones in a blog entry last year.

“Our FBI escort with us, we began to clean,” Nadoff wrote. “On our hands and knees. Spraying and scraping and wiping. The floor, the drain, the walls, the cabinets, the fridge door. The smell of blood was thick in the air. For hours we worked, getting all of the major areas. Then we went over the floor again, tile by tile, inch by square inch, making sure we missed nothing, all the while answering questions from the FBI team who had never seen anything like this, anything like the work that we did. They asked questions in the most respectful manner; they really wanted to understand – it was easy to tell that they cared and were so affected by this atrocity. We explained that according to Jewish law, blood is holy. The verse in Deuteronomy states that the blood ‘is the soul,’ so we go out of our way to collect all that we can in order to bury it.”

Not all Nadoff’s days in emergency services since joining the city force have been as rattling. COVID-19, in fact, has been a bit of a dry period.

“Ironically, our call volume has dropped during the pandemic,” Nadoff said. “Pittsburgh was lucky that we shut down when we did, mainly because we have less cases than other cities in the country. But, since more people were staying home, there were less people interacting with each other, leading to less car accidents or even less calls because people are weighing going to the hospital against the minor issue that they have. Specifically, I have noticed less people calling for toothaches or other issues like that.”

Despite the decline in the volume of calls due to COVID-19, Nadoff remained vigilant, as did his peers.

“Even though the call volume was lower, the potential risk was higher,” he said. “Any patient can potentially have COVID-19, and the last thing that we want is to bring it home to our families or bring it to work, infecting our personnel, and then causing manpower issues, inhibiting our ability to service the city.”

Nadoff’s time in Israel remains formative to him. He remembers two incidents, back to back, that resonated – and gave him a sense of direction.

“I was walking out of the Old City, I was wearing my uniform and had my kippah on my head, Nadoff said. “As I was walking up the stairs to the street, I was approached by a middle-aged Chassidic gentleman who evidently did not approve of religious Jews being in the army. As he passed me he turned and gave me a look and then spat at me, mentioned something about how the army is a terrible place, and walked away. I just watched him walking away and thought to myself, ‘Him, too, I am willing to die for. It doesn’t matter that he hates me. He is a Jew – and that’s enough for me.’”

The very next day in a different neighborhood, Nadoff passed another Chassidic man, this one with his son.

“I heard the child excitedly say to his father, ‘Look Abba! There’s a police officer!’” Nadoff said. “His father looked at me and then said to his son, ‘No, that’s a solider, and he watches over us.’ As I walked away, I couldn’t stop thinking about the encounter I had the day before and this one. The juxtaposition of the two helped me see my role in a new light: even though some people are against me, there are also those who belong to the same faction that appreciate me. I found it interesting that I didn’t go to the army for reasons of Zionism, or anything like that – I’m not sure why I went. But interactions like these furthered my resolve and gave me the reasons for going.”

And for coming home. PJC