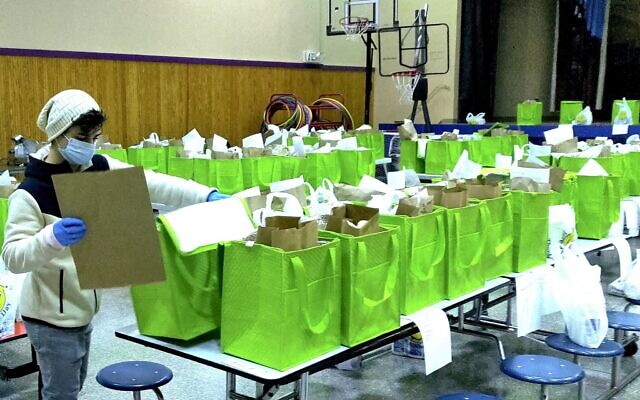 Yeshiva Schools of Pittsburgh is providing hundreds of free kosher meals during the pandemic. (Photo provided by Chezky Rosenfeld)

Along Forbes Avenue these days, some gestures of community goodwill come packaged as boxes of nutritious cereal and containers of macaroni and cheese.

Earlier this month, Yeshiva Schools of Pittsburgh started offering free, 100% kosher breakfasts and lunches to students’ families – and many more – through the National School Lunch Program. It has been an incredible success, organizers said.

Yeshiva Schools staff, who were working virtually, chipped in with scores of volunteers to launch the program, according to Chezky Rosenfeld, the schools’ chief operating officer. Parents gather daily at the girls’ school on the corner of Forbes and Denniston to collect their meals, which often contain kitchen staples like milk, juice and sandwiches. The school estimates it served 600 children last week alone.

What is most exciting for Rosenfeld, though, is that families do not need to meet any financial goals to qualify for the meals. And, in times where food insecurity is heightened, nobody is quizzed about their affiliation to Yeshiva Schools when they pick up their food.

“It’s open to anyone – anyone can come,” Rosenfeld said. “And there are no income requirements. We’re hoping anyone who can benefit comes to use this service.”

The national lunch program, signed into law by President Harry Truman in 1946, subsidizes nutritionally balanced meals in public and nonprofit private schools and residential child care facilities. Rosenfeld said an application for subsidies might take months but he was inspired by other local schools who were providing meals to their students, as well as families in need.

“If they can do it, we can pull it really quickly,” he said. “We were able to mobilize our staff to come together to make this work.”

The Jewish Federation of Greater Pittsburgh also threw support behind the initiative, awarding a $35,000 grant recently to Yeshiva Schools to help families who keep kosher and might be facing food insecurity. This funding enables implementation of the program rather than paying for the food itself, which is reimbursed, in part, from government funds.

The need in Pittsburgh’s communities – Jewish and otherwise – is readily apparent, according to Adam Hertzman, director of marketing for the Federation.

“Our planning experts are seeing skyrocketing demand from families facing food insecurity — a 33% increase at the food pantry and 47% increase among homebound households,” Hertzman said. “Programs like the kosher breakfast/lunch programs will enable children to focus on learning and reduce family stress at this difficult time, and they would not be possible without unrestricted funding from the community campaign, which enables our community to redirect resources in extraordinary circumstances such as those we face now.”

Rosenfeld said Yeshiva Schools surveyed Orthodox families throughout Pittsburgh before pursuing the subsidies, the grant or the program itself.

Shayna Creeger was one of the parents who helped get the wheels rolling on the free kosher food program. Creeger, who hails originally from Los Angeles but has been living in Squirrel Hill for about 17 years, has six children in Yeshiva Schools.

“It’s so nice to have prepared foods – I think it’s a good opportunity to provide this service,” she said.

Creeger, along with a team roughly 15-people strong, now helps handle administrative and support duties for the food program, taking in orders and dealing with kids’ allergies and preferences. She previously has volunteered at the school.

“I enjoy working on programs that rely on organized data for optimal success,” Creeger said. “It is a great opportunity to be involved in offering this needed service to the community during a very chaotic time.”

The program’s kosher food is prepared and packaged daily at the girls’ school, whose facilities are overseen by the Vaad Harabanim of Greater Pittsburgh, Rosenfeld said.

Just as many are hesitant to commit to timelines for stay-at-home recommendations or school re-openings, Rosenfeld said he could not say how long Yeshiva Schools would be offering the free breakfast and lunch program.

“We’re kind of playing it by ear,” he said. “We want to continue to do it as long as we able. We’re taking it week by week.” PJC