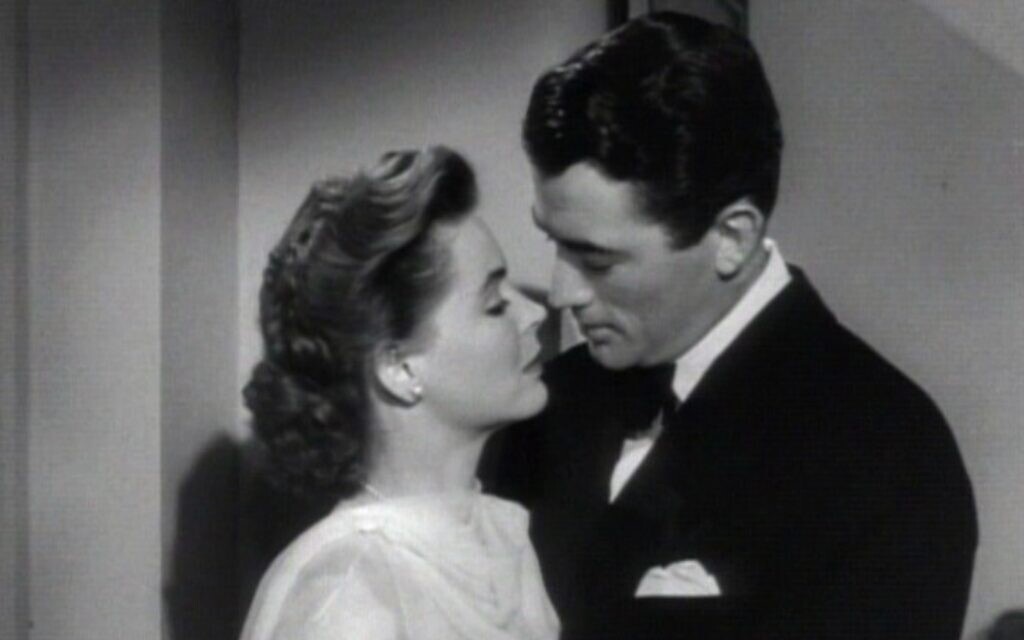 Screenshot of Dorothy McGuire and Gregory Peck from the trailer for the film ''Gentleman's Agreement''. (Public domain)

When it comes to antisemitism on the silver screen, there is no shortage of bombastic portrayals.

Films such as “The Believer” (2001) and “American History X” (1998) emphasize the horrors of deeply bigoted groups like the Ku Klux Klan and neo-Nazis, while plenty of other films focus on the historical atrocities that Jews have experienced through the centuries.

Those depictions can fail to capture the complexities of antisemitism, though, because much of the prejudice Jews experience comes in casual forms. As “Gentlemen’s Agreement” turns 75 this fall, Elia Kazan’s Best Picture winner illustrates the sharp nuances of antisemitism that may still be familiar to a modern audience. It’s full of small, hurtful remarks and offhanded actions from people who should know better, showing that the problem is often closer to home than most expect.

At first sight, the film’s elevator pitch might sound like a joke: A gentile journalist pretends to be a member of the tribe to write an exposé on negative attitudes toward Jews. But with Kazan’s direction and Gregory Peck’s calculated and captivating lead performance as Phillip Green, we’re delivered an enthralling look at the corrosive nature of bigotry.

“Gentleman’s Agreement” starts as Green moves to New York and starts a job at Smith’s Weekly, where the magazine editor suggests his first feature look at antisemitism. Green isn’t thrilled about the assignment, but decides he wants to do it when he struggles to explain to his son why people are bigoted.

After trying to approach the story through hard data, Green has difficulty coming up with a compelling angle. Eventually, he decides he needs to experience antisemitism for himself, so he poses as a Jewish man to really feel what it’s like to be the target of bigotry.

“I’ve been digging into facts and evidence. I’ve sort of ignored feelings,” Green says early on. “What must a Jew feel about this thing?”

Throughout the first act, “Gentleman’s Agreement” plays like a theatrical adaptation, but as the tension builds and the plot becomes knottier, it breaks free of those restrictions. The film doesn’t carry a light dramatic touch, but it manages to not be didactic when staying on point.

When Green starts telling people he’s Jewish, the effects are immediate: Rumors start flying around the Smith’s Weekly office, his new fiancée is taken aback by the suggestion that Green would pose as a Jew and, quickly enough, his son is getting asked if his family is Jewish.

As “Gentleman’s Agreement” progresses, Green’s relationship with his fiancé, Kathy (played by Dorothy McGuire), becomes the dramatic crux of the story. Kathy’s a well-meaning and sweet character, but tension arises from her unintentional ignorance.

The character of Kathy is how Kazan and co-writer Moss Hart hit on one of the film’s most significant themes: While many people can believe they’re not bigoted, they may still carry traces of it in their actions and words. The film is often at its best in those moments of discomfort, where Green has to acknowledge the hurtful actions of Kathy and decide how to respond.

“Gentleman’s Agreement” could have been better by taking an even closer look at that conflict, but it often succeeds on a personal level. Kazan as a director captures antisemitism’s worst aspects –– how ignorance hurts when it’s close to you, along with how bigotry feels when it’s casual –– with grace and elegance, even 75 years later. PJC