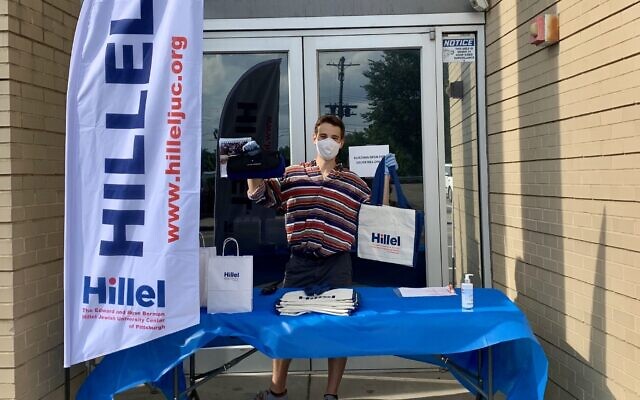 Shoshana Hoexter wouldn’t let the pandemic halt her tradition of baking challah each week for the graduate students at the University of Pittsburgh and Chatham University.

“I hoarded all the yeast in Pittsburgh,” joked Hoexter, who directs JGrads Pittsburgh with her husband, Shua. “It’s because I bought it in February. When I looked at the grocery stores in Italy, I went to Costco and bought all the yeast before anyone knew about COVID in Pittsburgh.”

The yeast went toward weeks’ worth of challahs for her family and the students.

In contrast, Pitt senior Eli Sigman, who is starting graduate classes this semester, has been yearning for a no-bake option.

“The number of times that I have wished that a microwavable mug challah was a thing has been very frequent these past couple weeks,” said the Pitt Hillel Student Board president.

Back-to-school has always been tough, but COVID-19 adds new stressors that have prompted changes in Jewish engagement on campus.

Sigman is especially worried about the freshmen. “It’s a little bit disheartening to not be able to create the same experiences that I had as a freshman,” he said.

“When everything is so new and changes constantly, I think it’s really important that people have people they can rely on,” she said. “And I think for freshmen, it’s going to be harder than usual to find those people. So I hope to help them find people who can help them figure it all out.”

Brower, who describes this semester as “sort of déjà vu but slightly different,” is working to create pandemic-friendly programs. 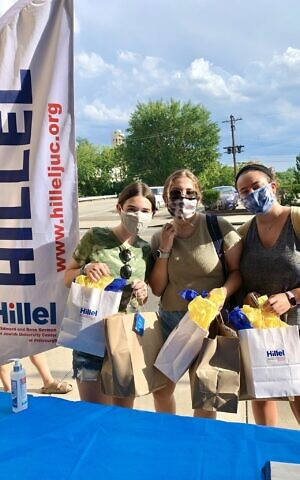 Students grab bags with a Shabbat ritual kit and a meal as part of Hillel JUC’s Shabbat 2 Go. Photo courtesy of Hillel JUC.

Take the annual havdalah and s’mores event. This year, Hillel JUC will send CMU students, even those who did not to return to campus, havdalah kits — complete with candles, spices, chocolate bars, graham crackers and marshmallow fluff — for a Zoom havdalah.

Pitt’s Challah for Hunger group is considering dropping off dough at students’ dorms so they can braid challah on their own.

And Hillel JUC’s weekly Shabbat 2 Go offers students to-go bags with grape juice, a prayer sheet and a meal as well as a virtual Shabbat event.

Of course, it’s not the same.

“There is an emotional toll on our Hillel — we miss our students being together with us in person,” said Dan Marcus, executive director and CEO of Hillel JUC. “However, we’re going to look at this as another positive opportunity to learn, reflect and be together virtually.”

Chabad at Pitt created a new Friday night tradition: Shabbat in the Park. The first week, it drew more than 150 students, so many that it ran out of homemade food.

At Schenley Plaza, three people were playing volleyball, and somebody was beatboxing in the corner, recalled Chabad at Pitt’s Rabbi Shmuli Rothstein. And in the middle of it all were more than 100 Jewish students, singing “Shalom Aleichem” and making kiddush over grape juice. 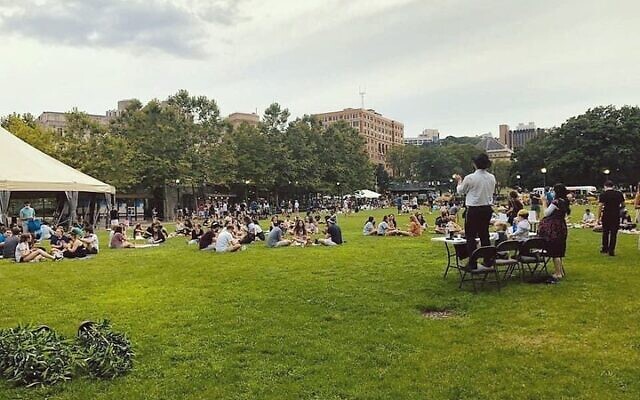 “It’s sort of a blessing in disguise,” said Rothstein. “It was so beautiful that even in future years — without COVID, God willing — we are still probably going to keep a Shabbat in the Park aspect.”

Pitt sophomore Sophie Sable, who helped package the food for the event, believes that a Shabbat meal is a great way to bring people together.

“I think that providing a basis for everyone to engage in Shabbat together, even if we’re separate, is kind of an interesting idea and a great way to make it feel more homey, more like a community,” she said.

Rothstein is considering other options for when it gets too cold to do Shabbat in the Park. One idea is short Shabbat dinners at his home. He’s figuring out the numbers: Maybe two or three rounds with 15 people upstairs and 15 in the basement, which would serve a total of 60-90 students.

For JGrads Pittsburgh, too, Shabbat dinners have become an exact science. The outside-only events are made possible with 6-foot tables, one person at each end, and washing and sanitizing stations.

Chabad House on Campus, which serves seven Pittsburgh-area schools, has big plans in the works. Rabbi Shmuel and Sara Weinstein are coordinating a virtual talk and concert with a Black Jewish rapper (whose name is being kept under wraps for now) on Oct. 22, a collaboration with the Pitt Program Council and Pitt’s Black Action Society. And they are talking with Chatham University to plan a virtual challah braiding demonstration.

The Chatham Jewish Student Association, which was launched last fall, is working with Hillel JUC to provide community and educational programming for Jewish and non-Jewish students alike.

“The education can’t stop just because we can’t see each other in person,” said junior Leah Berman-Kress, who founded Chatham JSA. “Hopefully, we’ll be able to put together something that students will support and be proud of and really want to be involved with.”

“I’m seeing more and more students that are suffering with depression, and it’s affecting many areas of their personal and academic life just because everything has changed,” he said.

“Whatever we can do — that personal interaction, the personal soup, the personal family — that is ultimately the key to keeping people sane, healthy and strong in these crazy times.” 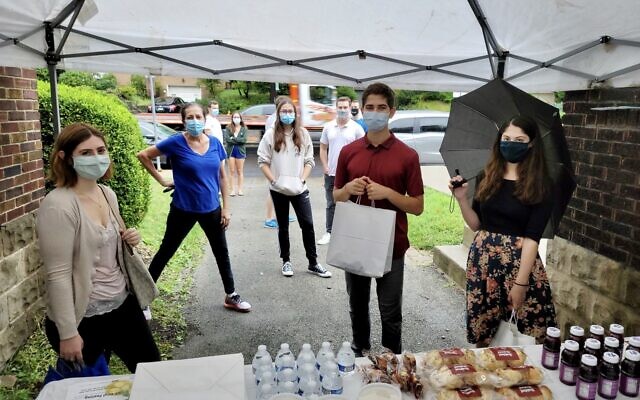 Chabad of CMU launched a Matzo Ball Soup Hotline and a Shabbat-to-go program to help.

For the High Holidays, Chabad of CMU and Chabad at Pitt will combine for services and a large Shofar in the Park brisket dinner on Sept. 20. Meanwhile, Hillel JUC will provide a mix of High Holiday offerings as well as an Elul workbook to prepare, filled with exercises, texts and inspiration.

Both Chabad of CMU and Chabad at Pitt will also hold classes this year through Chabad on Campus International’s Jewish U program.

Silverman considers it his mission to provide for students no matter what happens with the pandemic.

“[The] Chabad model is family, home and warmth,” he said. “Obviously, if students aren’t in person, it’s a lot harder to do that. At the same time, we’re here and we care, and that’s something that we can keep on doing no matter what’s going on.” PJC