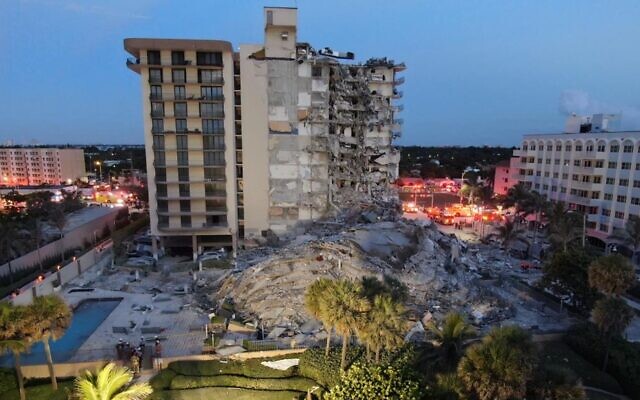 U.S. President Joe Biden declared an emergency in Florida following the collapse of an apartment building early Thursday morning in a town near Miami with a large Jewish population.

“I made it clear that I say to the people of Florida: Whatever help you want that the federal government can provide, we’re waiting,” Biden said earlier Thursday. “Just ask us; we’ll be there. We’ll be there.”

At least three people are dead and dozens more feared killed in the collapse of a 12-story condo building in Surfside, Florida, just outside Miami. At least 34 of the 99 people believed to be missing are Jewish, the Chabad of South Broward in Hallandale Beach told The South Florida Sun-Sentinel.

Israel’s Prime Minister Naftali Bennett said he was following the “difficult images” from Florida with concern.

“Our Foreign Ministry representatives in Miami and Israel are doing everything possible to assist and address the situation,” he said in a statement. “The entire nation of Israel prays for the safety of those injured and missing in the disaster.”

He added: “From here we send support to our brethren in the Jewish community in particular, and to all Florida residents in general, and express our sorrow following this tragic event.”

According to the Kan public broadcaster, no Israeli nationals are currently known to be unaccounted for. Earlier reports indicated many of those missing were Israeli citizens.

“The atmosphere here is very pessimistic,” Elbaz-Starinsky told Ynet. “This is a very tragic incident… We’re in contact with the families of the missing about the possibility of bringing a rescue team from Israel if necessary.”

Foreign Minister Yair Lapid said he had spoken to the local Israeli consul and the head of the local Jewish Federation to offer support.

“Foreign Ministry staff in Miami and Israel are doing everything they can to help those on the ground, the wounded and the families. It is a difficult and complex event and it will take time to deal with it. We are at their disposal for any assistance they may need,” Lapid said in a Foreign Ministry statement.

JUST IN: 7News has obtained surveillance video of the moment the Champlain Towers South Condo collapsed in Surfside early this morning.

According to a fire official, 35 people were pulled from the collapsed building. Search and rescue efforts ongoing. https://t.co/Ac7KgnJOSO pic.twitter.com/oeczbumRG9

A spokesperson for Israel’s consulate in Miami said that Jerusalem had offered search and rescue help or other aid to local authorities, but had yet to receive an answer. Israeli search and rescue teams are often dispatched abroad to aid in missions following earthquakes and other disasters.

Earlier, Elbaz-Starinsky tweeted the Foreign Ministry has “made all possible assistance available to us. We are in touch with the authorities and the rescue forces. We are providing the community and its leaders with every possible help.”

President Reuven Rivlin said Friday morning that “our prayers are with the families anxiously waiting for news of their loved ones in Miami. We hope for the recovery of the survivors and send heartfelt condolences to those who have lost family members.”

Dozens of people gathered at “The Shul” in Bal Harbour, a nearby synagogue, to pray for those missing and injured on Thursday, as names of those still unaccounted for circulated in WhatsApp messages around the globe. The synagogue was also coordinating donations and supplies arriving from around the world as news spread of the tragedy.

Shimon Wdowinski, an Israeli-born professor at Florida International University, said a 2020 study of the area surrounding the building found that the structure was slowly sinking in the 1990s.

“We cannot say what is the reason for that from the satellite images but we can say there was movement here,” Wdowinski said, according to the university. But he cautioned that such sinking is unlikely to have caused the building’s collapse without other factors at play.

According to The Associated Press, the building was popular among foreign nationals and visitors. Ron Ben Hayoun, a 22-year-old volunteer and north Miami resident, told AFP that he returned to his childhood neighborhood to help following the disaster.

In this city with a large Jewish community, “we try to help everyone, we are not exclusive,” he said. “It’s pretty shocking. people are very emotional,” said the young man who had recently returned from Israel where he did his military service.

“The building is literally pancaked,” Surfside Mayor Charles Burkett told AP. “That is heartbreaking because it doesn’t mean, to me, that we are going to be as successful as we wanted to be in finding people alive.” PJC