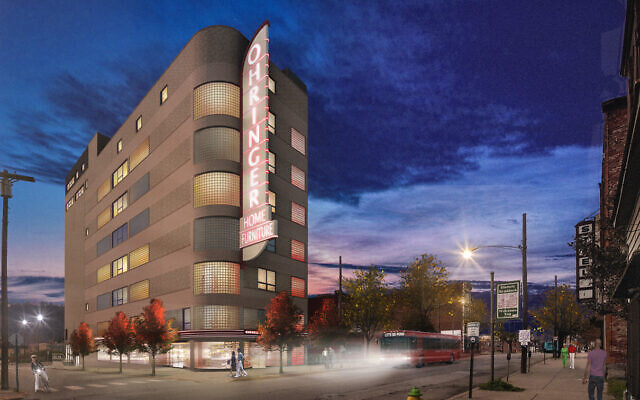 Braddock Avenue, bustling decades ago with businesses like the prominent Ohringer Furniture Store, will soon be illuminated again by a re-created Ohringer sign, more than five stories tall, now being installed. It comes as the Ohringer building transitions into its latest incarnation: an apartment complex with 37 affordable artist residences.

The historic Ohringer sign, scanned from the Senator John Heinz History Center. The photo was used by Sign Innovation to understand how to recreate the marquee sign using today’s materials — aluminum and LED. (Photo courtesy of Gregg Kander)

When Jewish philanthropist Abe Ohringer opened the building in 1941, it was the largest of several furniture stores in Braddock. If there was an Ohringer sale, said Jewish developer Gregg Kander, people would line up along the whole block waiting to get in. In the 1970s, the store closed.

But as part of a chain of projects to revitalize Braddock, the renovated eight-story Ohringer building will illuminate the town with the red glow of the LED sign and the vigor of the artists it will house. 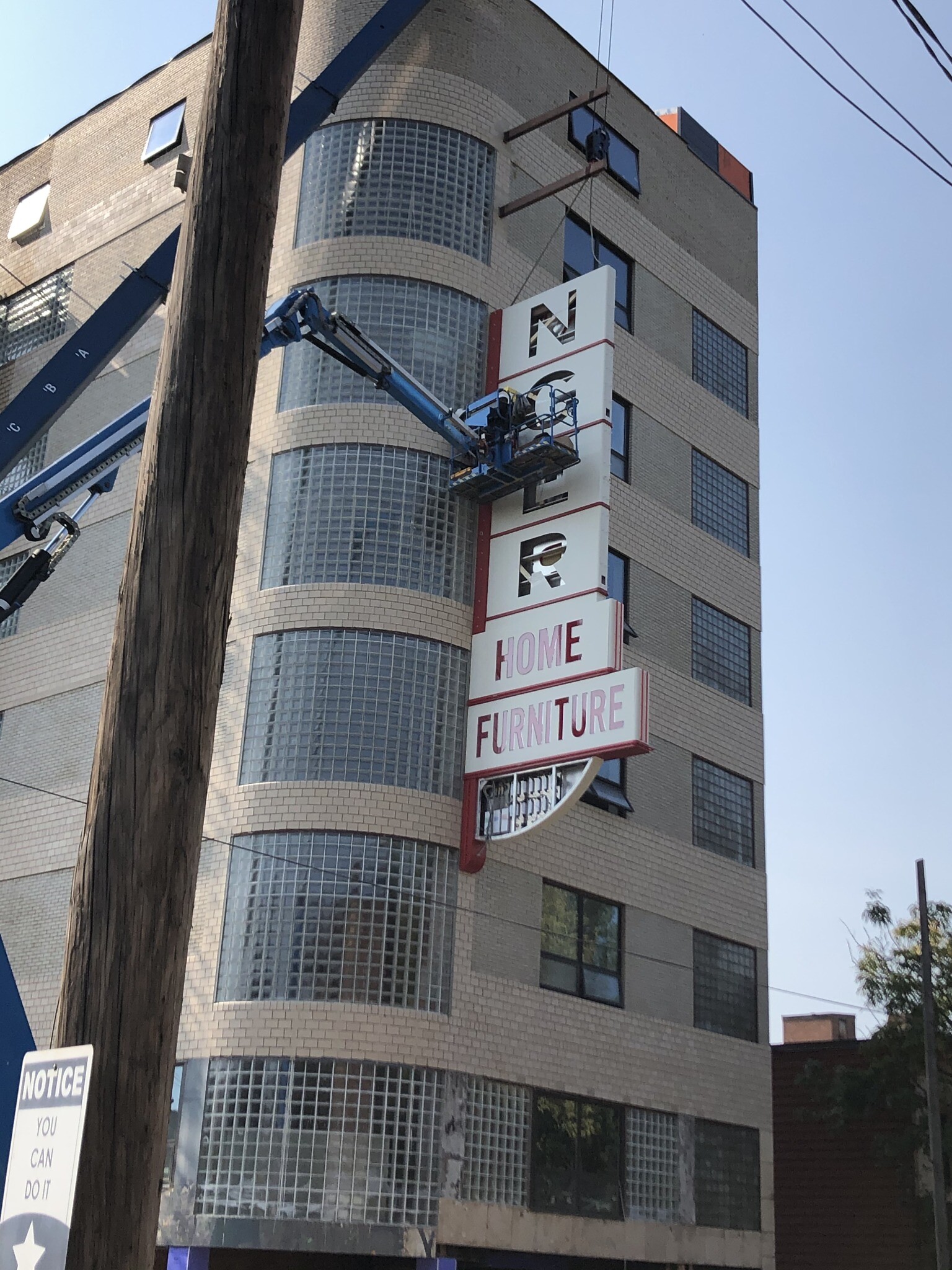 “It’s a first-class amenity for people who typically don’t get it,” said Kander, the project’s developer and owner. The building includes an art studio, a rehearsal studio and a private courtyard. The sign, 58 feet high and 12 feet wide, and designed to match the dimensions and style of the original, will stretch from the top of the second floor to the building’s new rooftop deck.

And the ground floor will feature an artwork display on a revolving showcase platform from the building’s furniture store days. The ground floor will be finished and fully operational around November or December, estimated architect Robert Tunon, an associate at Rothschild Doyno Collaborative.

“We have been honored to work with Braddock for more than a decade to welcome positive, community-driven change, most of which has focused on activating their main street with great places to live, work and play,” said Ken Doyno, president of Rothschild Doyno Collaborative.

Other businesses on Braddock Avenue, explained Kander, are now looking to revamp. “It would be so fantastic to have the avenue start lighting up again,” he said. “It’s that trickle down of one thing leads to another, and it helps create a village of us all working together to get to a restored avenue.”

Kander was inspired by two women — his late wife Ellen Weiss Kander and his fiancée Anna Hollis — to assist communities that lack the privileges he has. “You don’t know you’re in a bubble until you step out of it,” he said.

So when Kander had a chance to join community-driven efforts and invest in Braddock’s businesses, he said yes.

“These underserved communities typically do not get these infusions,” he said. “They stay neglected. And here, I’m basically taking my privilege and putting it towards a community that deserves it.” 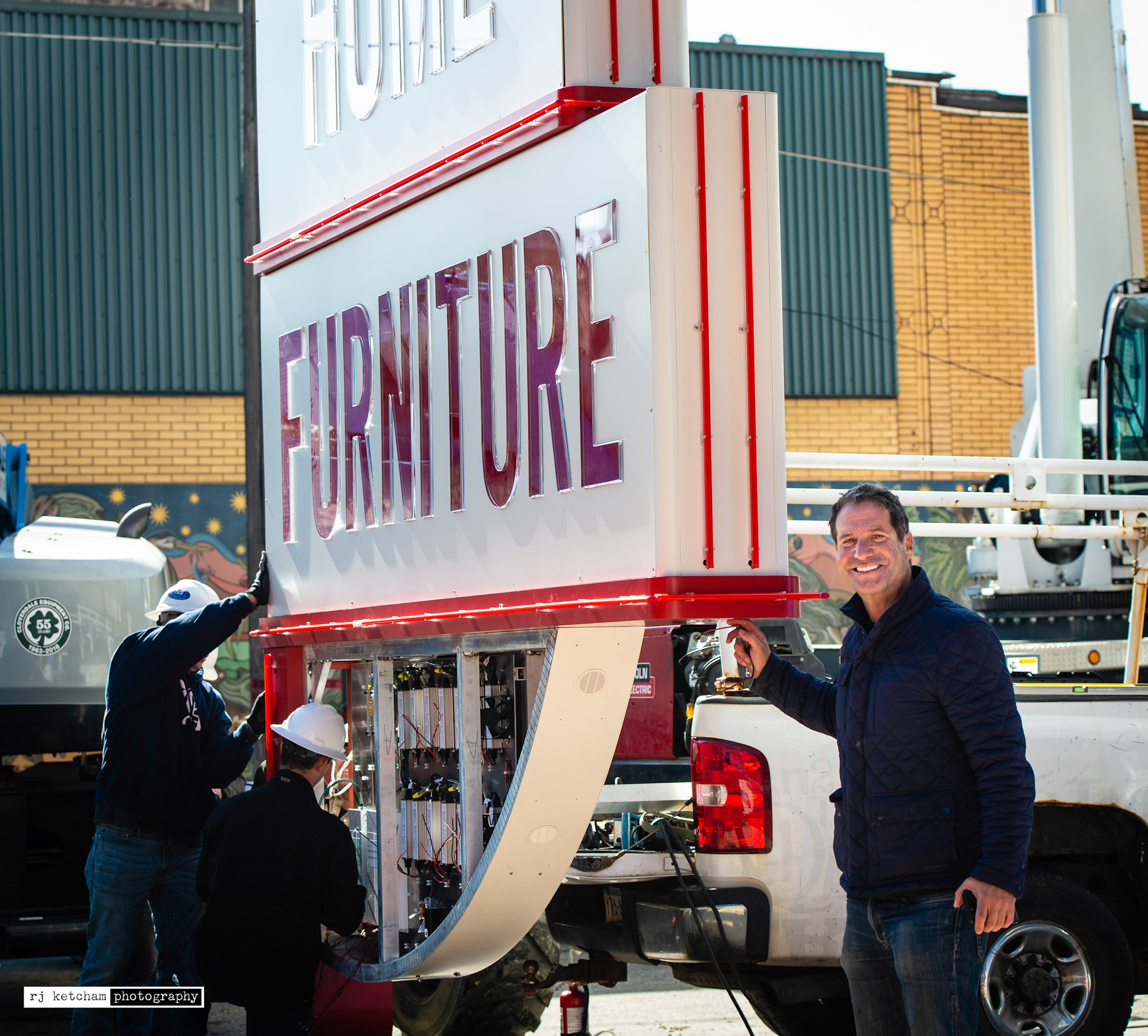 For Braddock residents, Kander explained, this is momentous. “It just means to them that ‘Oh my gosh, we’re going in the right direction now,’” he said. “‘We’re coming back instead of buildings just crumbling and decaying. This is a sign.’”

Kander believes the artists can invigorate the community.

“Artists just have a great, creative spirit that is infectious,” he said. “A good virus.”

They can apply for and lease the apartments via ohringerarts.com.

All of the letters on the sign are now installed, and finishing touches are anticipated to be complete by Oct. 12. The installation will be followed by a community celebration in November. PJC