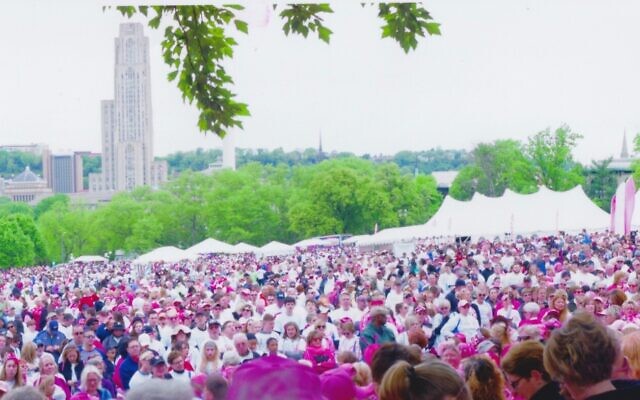 Pittsburgh's 2002 Race for the Cure had 38,000 participants. (Photo by Stanley Winikoff)

The nonprofit Susan G. Komen, which raises funds to fight breast cancer, will close all 64 of its regional offices, including its Pittsburgh affiliate, by the end of the calendar year and will handle all operations nationally.

“It’s a loss to the city,” said Laurie Moser, who co-founded the Pittsburgh Race for the Cure with two other Jewish women — Eileen Lane and Pat Siger — under the National Council of Jewish Women in 1992.

Moser has an emotional connection to Komen “because I know what the disease is,” she said. She was diagnosed with her second bout of breast cancer while involved with the Pittsburgh affiliate — as a volunteer chair for four years and the executive director for six years. Her breast cancer wasn’t life-threatening the second time, she said, because she was armed with information she had learned from Susan G. Komen.

Kathy Purcell, CEO of Susan G. Komen Greater Pennsylvania, is unsure whether the Pittsburgh and Scranton Race for the Cure events will continue. The event raised $400,000 this year and was held remotely mid-September in place of the usual Mother’s Day fanfare in Schenley Park.

“Through your support, Komen Greater PA raised $46 million for community education, screening and treatment initiatives, and $10 million for national breast cancer research,” Purcell wrote in a letter shared via email and social media.

“We invested your contributions in community initiatives, including patient navigators at local hospitals, educational programming and the life-saving Mammogram Voucher Program. We are very proud that much of the national research funding was re-invested in our region, supporting local research initiatives as well [as] two Komen scholars at the University of Pittsburgh.”

Remaining funds were given to five local nonprofits that will put the money toward the local breast cancer community.

JUST ANNOUNCED:Susan G, Komen closing its local office. I just spoke to the CEO. She says all fundraisers will now be handled nationally & she is unsure(although hopeful)events such as Race for the Cure will continue. Her message to breast cancer survivors tonight #WTAE pic.twitter.com/wgK8GbHawN

In April, Komen announced that it would restructure and start to centralize its operations.

Lane is uncertain whether and how much she might support the national organization moving forward. Still, she knows how much the organization and the Pittsburgh affiliate specifically have accomplished.

“I’m proud and I guess hopeful that the important mission will continue under Komen,” she said. PJC