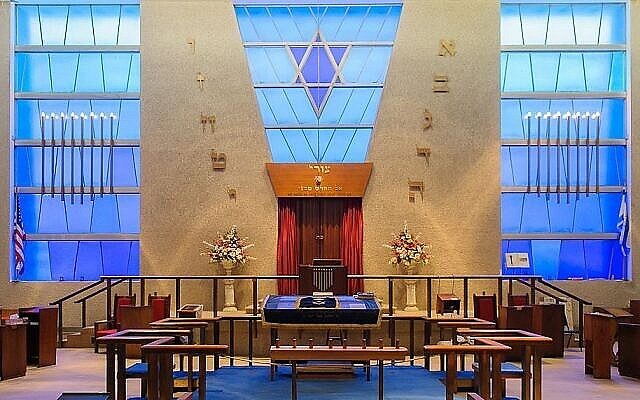 Gemilas Chesed in White Oak hopes more people will see the inside of their sanctuary through their membership in the JCLS’s small synagogue coalition. Photo by Eliran Shkedi

Congregation Emanu-El Israel’s president Irene Rothschild has found help preparing for what she called “the inevitable.” Beth Samuel Jewish Center’s cantor, Rena Shapiro, has been given an opportunity to learn from — and share programming with — other congregations across Western Pennsylvania. Barry Rudel, executive director of the Jewish Cemetery and Burial Association, has been able to present his organization’s mission to area congregations. Gemilas Chesed Synagogue’s vice president, Larry Perl, has been given an opportunity to promote his shul.

The leaders of these small congregations — and others in Pittsburgh and surrounding areas — are all grateful for the help they have been given by the Jewish Community Legacy Program, a nonprofit started by a David Sarnat, a longtime Jewish professional, in 2010.

The JCLP’s mission, according to its website, is to provide resources and solutions for small Jewish congregations in the United States and Canada to successfully navigate challenges, prepare for the future and ensure an enduring community legacy.

Noah Levine, the JCLP’s senior vice president, said the organization works exclusively with small congregations and focuses on one thing: helping to plan for what comes next.

For some congregations, he explained, that means dealing with questions of legacy once the decision has been made to close; for others, the JCLP helps with issues of sustainability.

A legacy plan, Levine said, might include arranging for care for a congregation’s cemetery, and deciding what to do with its Sefer Torahs, archival material and building. If the congregation has funds remaining after it closes, the plan could include creating an endowment to send local children to Israel, for example, or sponsor scholarships to Jewish day schools or summer camps.

Leadership succession, congregant involvement and fundraising are all issues that surround sustainability, he said.

JCLP, which is based in Atlanta, works with about 13 congregations in and around Pittsburgh and partners with the Rauh Jewish History Program & Archives at the Heinz History Center and the Jewish Federation of Greater Pittsburgh.

The organization is making an impact in Western Pennsylvania, said Sharon Perelman, director of planned giving and associate director of the Jewish Community Foundation at Federation, and a member of JCLP’s board of directors.

“They work to help the synagogues plan their legacy and plan for the future before the future happens to them,” she said.

One example of the type of help provided by JCLP, Perelman said, was the relocation of a series of bronze sculpted figures titled “Procession I” by American-Jewish sculptor Elbert Weinberg. The figures were given to Rodef Shalom Congregation by Temple Beth Israel in Steubenville, Ohio, when it closed.

The Pittsburgh Jewish Community Foundation acts a type of back office for local small congregations that don’t have a budget for a staff to assist with endowment funds, Perelman said. The foundation creates a fund that the congregation controls, and handles investments.

“I think we’ve been really helpful, saving them time and money,” she said.

She said that even a difficult decision, like closing, can become an “aha” moment for a congregation.

“It’s heartwarming to see these different synagogues come to terms with what will be best for the community down the line,” she said.

A recent addition to the JCLP’s offerings is a small synagogue cohort connecting shuls across Western Pennsylvania.

The idea, Levine said, was initially tried with a group of Central Pennsylvania synagogues in 2019 prior to the pandemic. It was then modeled in Ohio and Mississippi.

The Western Pennsylvania cohort includes more than a dozen congregations. Over the next year, Levine said, leaders of all the cohort members will give presentations to prompt collaboration and joint programming.

“It’s a good opportunity for small congregations to come together,” he said.

The program will kick off Aug. 25 as Eric Lidji, director of the Rauh Jewish Archives, presents “Spirit of the Western Pennsylvania Jewish Community” virtually to cohort members.

Lidji’s talk will be followed by a virtual Sh’mita seder on Selichot on Aug. 28, led by Cantor Rena Shapiro of Beth Samuel Jewish Center in Ambridge. The program will include a discussion about the sabbatical year, a seder and a Selichot service.

This fall, Rabbi Lenny Sarko of Greensburg’s Congregation Emanu-El Israel, will discuss his work creating a Sefer Torah in braille.

Emanu-El’s president, Irene Rothschild, said the congregation hadn’t given much thought to its legacy before meeting with Levine several years ago.

“We weren’t thinking about the solution, but we know, and have known for a while, that it’s probably going to be inevitable at some point,” she said. “We’re doing our best to prolong that inevitability.”

The JCLP helped Emanu-El develop a long-range planning committee, she said, with a mission statement. The committee created a capital campaign and legacy plan, which she described as akin to a living will.

Rothschild said that some members initially panicked when they learned of the congregation’s plans.

“We said, ‘We’re not going away, it’s like a will. When the situation arises, we’ll have a plan.’ That was the best thing to come out of the committee.”

Gemilas Chesed’s vice president, Larry Perl, said the Orthodox synagogue in White Oak is a small congregation that offers amenities that might be hard to find in a large city, including affordable housing and a family-like community.

The shul, he said, is just beginning to work with the JCLP cohort and he is looking forward to sharing all that Gemilas Chesed has to offer.

No matter where a congregation is in its life cycle, JCLP works under the same premise, Levine said.

“The existence of a congregation is based on the people.” PJC