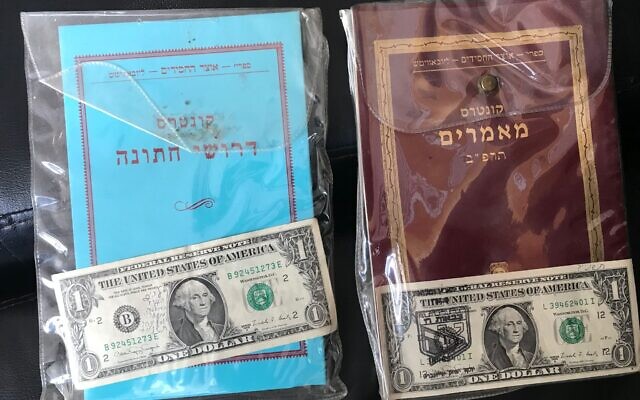 One man’s trash is another man’s priceless memento — bestowed by a towering 20th-century religious leader.

Wilansky, who was walking to B’nai Emunoh Chabad from his house in Greenfield on a Sunday afternoon, noticed newly discarded items in the trash. The rabbi had asked a few men to help clean the synagogue for Purim, and they discarded boxes of books along with other materials into a dumpster.

Wanting to check on the progress of the cleanup, Wilansky peered into the dumpster and saw that it wasn’t only garbage filling the container: Inside was a box containing two holy books, or sefarim. And in the books were dollar bills — distributed by the Lubavitcher Rebbe, Rabbi Menachem Schneerson.

“At the bottom of the box there were two booklets, and I recognized them and said, ‘Hey, this looks interesting,’” Wilansky said. “Sure enough, there were two artifacts with the dollars.”

The Rebbe, Wilansky explained, often gave books to his followers.

He recalled a time when he was younger and living in Montreal when Schneerson was distributing books about marriage after his own wedding anniversary.

“A public announcement was made,” Wilanksy said. “Some people chartered buses. They drove to New York just to get this dollar with this booklet and come right back. It was one of those times when you didn’t want to miss an opportunity to receive one.”

Schneerson would often spend hours on Sundays distributing dollar bills. His intention was that those who received the money would donate it to charity, Wilanksy said. People would often substitute a dollar of their own to give away and keep the memento for their private collection.

Wilansky said that as surprising as his dumpster find was, on closer examination he realized he knew the owner — it was the brother of his brother-in-law.

He said that the books were donated and discarded in error.

“People often just drop off things and go,” Wilansky said. “I called him [my brother-in-law] because these things are priceless. People pay thousands of dollars just to get one.”

Playing the part of a dumpster detective paid off. The rabbi was able to return the found treasure to its rightful owner.

Wilansky said that the effort to clear space at Bnai Emunoh Chabad wasn’t just in anticipation of the holiday. The Chabad Bnai Emunoh is building two new mikvahs.

“We’re trying to get one of the rooms cleaned out,” he said. “We had to get rid of a lot of books because of the construction of the mikvah. It’s getting pretty big. The men’s mikvah is going to be double the size of the one in Squirrel Hill at the Lubavitch Center.”

The significance — and randomness — of his dumpster find aren’t lost on the rabbi.

“If I wouldn’t have looked in the dumpster, I would have moved on with my life,” he said. “It was a Sunday afternoon. I just came in for a few minutes to check things out. It would have been lost to history. Sometimes it’s about the right place at the right time.” PJC