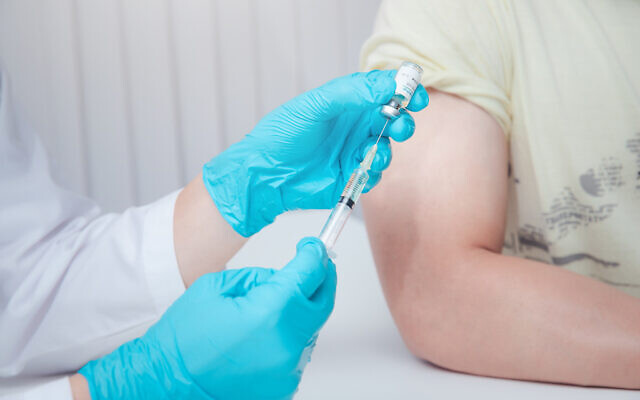 Pittsburghers are ready to roll up their sleeves for the COVID-19 vaccine Photo by Skarie20/iStockphoto.com

While all residential communities within the Jewish Association on Aging have been approved to receive the newly available vaccines against COVID-19, it is still unclear when vaccinations will begin.

The Food and Drug Administration authorized the emergency use of a COVID-19 vaccine manufactured by Moderna on Friday, Dec. 18. That vaccine was the second to be made available, a week after the FDA authorized a vaccine created by Pfizer, also with an emergency use authorization.

While the JAA is on a priority list to receive the vaccine, it does not yet have confirmation of a date when it will begin to receive shipments, according to a JAA spokesperson. It is also unclear whether the JAA will receive the Pfizer or Moderna vaccines, although it most likely will be the Moderna vaccine because the Pfizer drug is currently being distributed to local hospitals.

CVS Pharmacy, which will be distributing the vaccine regionally, will both supply and administer vaccinations for the JAA staff and residents. While no official date has been set for vaccinations, they will most likely occur beginning in January, the JAA spokesperson said.

Nursing homes across the region have been particularly hard hit by the pandemic. While the JAA avoided a critical outbreak of COVID-19 in its facilities for months, in early August, six residents of the Charles Morris Nursing & Rehabilitation Center who tested positive for COVID-19 had died, as did one resident of Weinberg Terrace, a personal care community.

“JAA’s residents, our team members and their families have been waiting months for some positive news related to COVID,” said Deborah Winn-Horvitz, JAA’s president and CEO. “Knowing vaccinations are on the horizon gives us hope that there will finally be relief from some of the stress and heartache related to the pandemic.”

The vaccine will allow the JAA to accomplish one of its “highest priorities,” said Winn-Horvitz: reuniting residents with their families.

The Squirrel Hill Health Center also has been preparing and planning for distribution of the vaccine.

“It’s a bit chaotic,” said Susan Friedberg Kalson, CEO of the Squirrel Hill Health Center. “On the other hand, it’s a much better chaos than what we’ve been living with since March.”

The Squirrel Hill Health Center plans to vaccinate its staff first. It will then help vaccinate those classified as Phase 1A by the Centers for Disease Control and Prevention.

Finding those people is part of the “chaos” Kalson referenced. The center is now working to develop a strategy for reaching them, and has already begun to plan for distributing the vaccine to the general population.

Earlier this month, the Jewish Healthcare Foundation provided a grant to the Squirrel Hill Health Center, enabling it to purchase medicinal grade freezers to store the Moderna vaccine, which does not require the subzero temperatures as does the Pfizer version.

“Right now, we’re supporting refrigeration, but we’re there for them for whatever they need,” said Karen Wolk Feinstein, JHF president and CEO. “You know, this is a part of our mission of saving lives. I can’t think of a better way to do it.”

The Squirrel Hill Health Center is currently partnering with the Jewish Community Center of Greater Pittsburgh, which offers COVID-19 testing at both its Squirrel Hill and South Hills locations. The two organizations also expect to collaborate for vaccine distribution.

“The goal is that we’d like to be what’s called a ‘pod,’ an open port of distribution,” said Brian Schreiber, JCC president and CEO. “We actually did that in 2009 with the H1N1 vaccine and did several immunization clinics way back then. We will need to get [county] approval. We anticipate getting that when it’s time for public vaccination but don’t know that yet.”

It will still be some time before the general population begins to receive vaccinations. As the JAA, JCC and South Hills Center are unable to answer any questions about the vaccine or when they might begin to receive it, those interested in learning more are urged to contact the Allegheny County Health Department. PJC